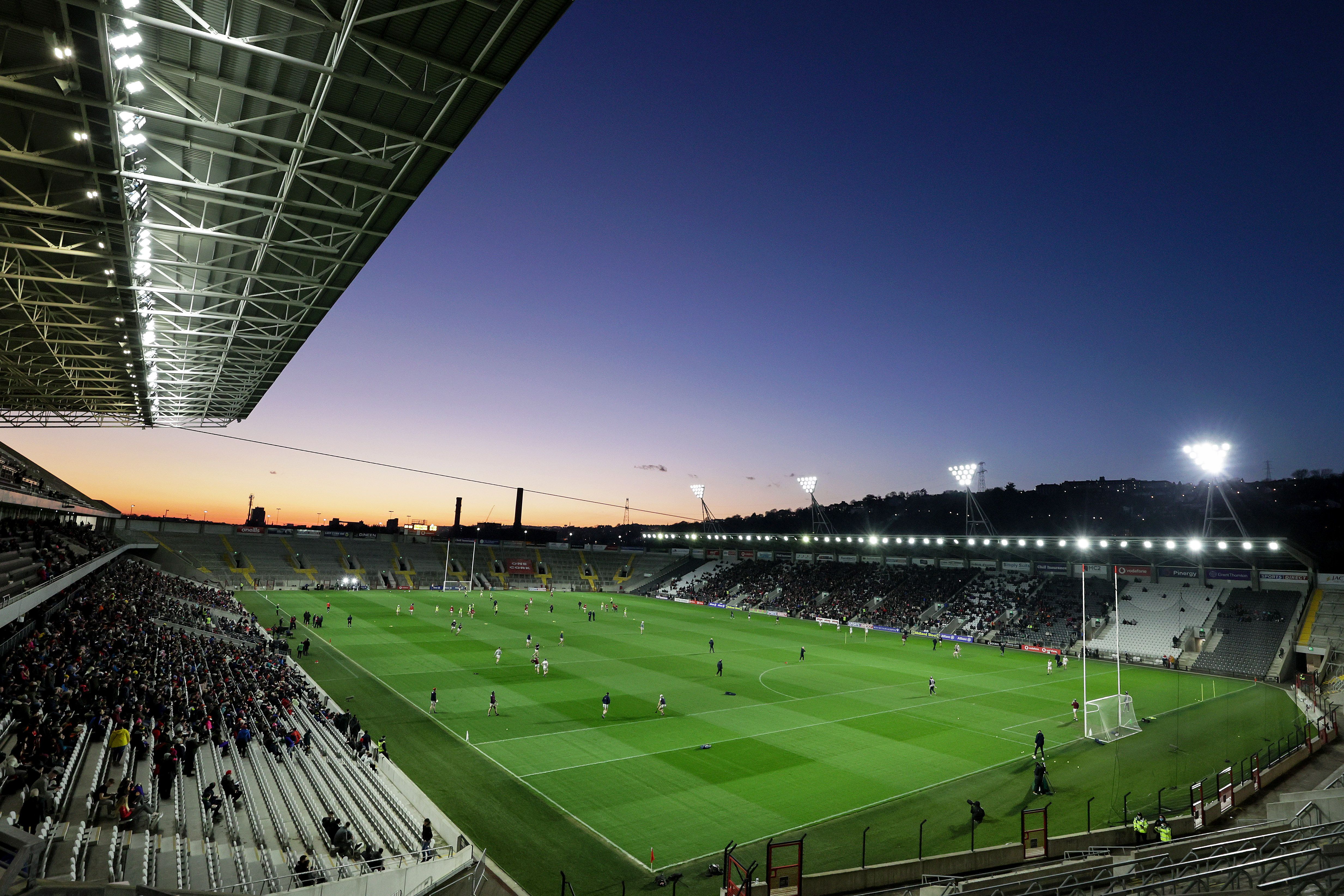 A view of the sunset at Pairc Ui Chaoimh. INPHO/LASZLO GECZO

Singer Ed Sheeran is causing problems for sport administrators in Ireland this year. The redhead from Halifax in West Yorkshire has Irish connections in Wexford and Galway, but it’s in Cork and Limerick that his concerts are disrupting sporting events. Cork GAA has already been forced to move two big championship games out of Pairc Ui Chaoimh to avoid a clash with Sheeran’s concerts. Cork’s Munster football semi-final against Kerry will now be played at nearby Pairc Ui Rinn and the Rebels Munster hurling championship game against Clare has been moved to Thurles to accommodate the singer’s concerts at the Ballintemple venue on the banks of the River Lee in May.

Now Leinster Rugby and Munster Rugby have confirmed that they have also switched dates for their United Rugby Championship games to avoid a clash with Ed’s concerts in Thomond Park in early May. The first game between Munster and Leinster was initially fixed for the Aviva Stadium in Dublin on April 2, but that game will now be played at the same venue on the weekend of May 21. The game Thomond Park will now be played on April 2.

Kerry-born jockey Oisin Murphy will be unable to ride again until February 2023 after being handed a 14-month back-dated ban last week for breaching Covid-19 regulations and failing two breath tests. The 26-year-old three-time English champion jockey will be ineligible to reapply for his riding license for 11 months after admitting to breaking Covid regulations, misleading the British Horse Racing Authority and prejudicial conduct. He has been given an additional 100 days for alcohol breaches after two racecourse incidents during 2021, including failing a breathalyzer test at Newmarket in October last year. Murphy relinquished his riding license last year in order to focus on his rehabilitation after a breach of coronavirus protocols. Murphy had gone to the Greek island of Mykonos, which was on the Covid red-list at the time, but he had attempted to convince English race officials that he had been at Lake Como in Italy

The Irish Women’s soccer team finished in third place in the Pinatar Cup tournament in Spain last week. Having beaten Poland and narrowly losing to Russia, Vera Pauw’s team faced Wales in the third-place final, with a Denise O’Sullivan goal securing the win. Irish manager Pauw said the tournament was a good warm-up for the Irish women’s next World Cup game against Sweden in April. Last week Sweden won the Algarve Cup in Portugal, beating Italy 6-5 on penalties, after a 1-1 draw. The Northern Ireland women’s team were also in Spain last week for warm weather training to prepare for the Euro 2022 finals in July. In Marbella they beat the Faroes Island 3-1, drew 2-2 with Switzerland and lost 1-0 to Romania.

Olympic walker Rob Heffernan insists he has no grand expectations about what his son Cathal’s  loan spell at AC Milan will lead to. The 16-year-old center-back last month started his five-month residency in the Serie A’s Academy. Young Heffernan, an Irish under-17 international, traveled to Italy with no guarantees, only a buy option held by the Italians if they decide to offer him a permanent contract. Cathal’s parents Rob and Marian, are well versed in the journey to sporting stardom and are urging caution when it comes to hyping up their son. Rob said: ‘‘People get obsessed with the allure of bells and whistles in football. Some get carried away because AC Milan is such a big club. But if he gives up in the morning, he has done great. If it doesn’t work out, something else will open up. My attitude is that I would pay for a young fella to go into the environment he is in. If you are playing football for two and a half hours per day, six days per week, it’s going to help your development. Marian and I are not looking at six months or a year down the road. We don’t wreck his head by talking about football too much, preferring to chat about normal things.’’

Following his appointment as manager of Aberdeen last week the managerial stock of Waterford-born Jim Goodwin continues to rise. The 40-year-old, who is the first Irishman to manage the Dons, one Irish senior cap, in 2002, during footballing career played mainly in the lower leagues in England. He finished his playing career in Scotland with St Mirren and Alloa, where he began in management, leading Alloa to promotion to the Scottish Championship and doing well at St Mirren, where he kept a club of modest resources competitive in the Scottish Premiership. While the successful Alex Ferguson era has long passed and only one trophy has been won in the past 27 years, the Scottish League Cup in 2014, Aberdeen are regarded as the third biggest club in Scotland, behind only the two Glasgow giants. Meanwhile Goodwin has been replaced at St Mirren by former Northern Ireland international Stephen Robinson, who joins from English League One club Morecambe.

Former Meath footballer Colm O’Rourke says there is a crisis in Leinster football, pointing out that there could be no county from Leinster in Division One of the National Football League next year. Dublin and Kildare held the two the bottom two spots of the Division One table last week, though the latter triumphed over the former at the weekend to leapfrog over Monaghan into sixth place. Meanwhile, in Division Two, two Leinster counties, Meath and Offaly are struggling with relegation a far more likely prospect for those two sides than promotion.

CHAIRMAN CONTINUES TO INVEST IN DERRY

Derry City have announced that both manager Ruaidhri Higgins and key player Ronan Boyce have signed four-year contract extensions at the club. It will see them remain at the Brandywell until at least the end of 2025. Derry chairman Philip O’Doherty, who sold his business E&I engineering to Vertiv Holdings for €1.5 billion last year, has reiterated his commitment to the long-term plan in place at the Brandywell as he continues to put significant investment into the club. Higgins only joined the club last April and turned the side from relegation candidates to finish the year qualifying for Europe in fourth place. Higgins had been working under Republic of Ireland manager Stephen Kenny as an analyst. O’Doherty has helped Higgins bring back some of the big name Derry players back to their hometown, such as Patrick McEleney and Michael Duffy from Dundalk.

FREEDOM OF LONDON FOR RUSH’S MORGAN

England’s Dublin-born World Cup winning-captain Eoin Morgan was awarded the Freedom of the City of London last week. The 35-year-old, a native of Rush, guided England’s men’s 50-over team to World Cup glory on home soil in 2019 and continues to lead the team in white-ball cricket. Morgan has played for Lord’s-based Middlesex throughout his career and made more than 350 international appearances across all formats. Morgan said: ‘‘I am thrilled and immensely proud to receive this recognition. Leading England to its first ever one-day World Cup win was my dream but cricket isn’t just about showcase events like this. It’s about nurturing and realising many dreams. This involves encouraging and empowering communities to participate. Cricket is a wonderful sport for everyone to enjoy.’’