Home Life and time are one in 'The Same' 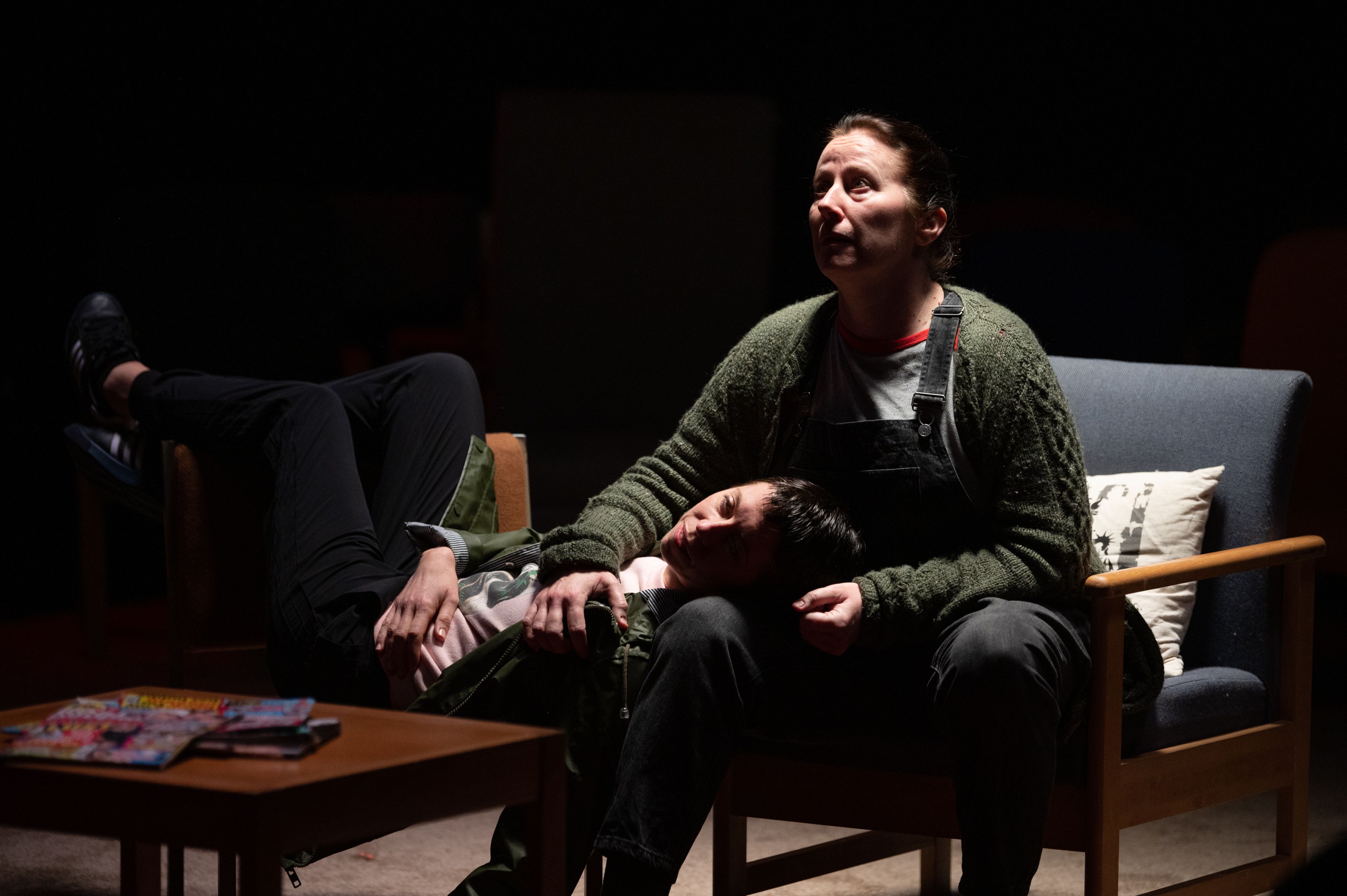 Life and time are one in 'The Same'

Who among us, when we by chance happen upon something or someone from our yesteryears, has not known the unmistakable feeling: a rush of comfort, and yet, simultaneously, an inexplicable reluctance, like a fear of falling backwards? For some, memory soothes like the tides of time, while for many, memories are difficult to avoid or embrace.

Everyone looks to the past differently, as they collide with the present; and the exasperating tensions that arise from those discords are met head-to-head in Enda Walsh’s U.S. premiere of “The Same,” a Corcadorca Theatre Company production, directed by Pat Kiernan, at the Irish Arts Center playing through March 6.

Frantic and foreboding, this brief, close encounter of the same kind can be a challenge in concentration (clocking a fast 50-minute run time) and comprehension, but for those who keep with it, the play’s meaning can be felt fully.

The threadbare yet compact plot of “The Same” tells the story of an anomaly of Lisas, performed by Catherine Walsh and Eileen Walsh. When The Other Lisa (Eileen Walsh) arrives in an unnamed city, and meets a woman also named Lisa (Catherine Walsh), she feels an odd connection she can’t describe with words.

After discovering they share more commonalities than their name, but the same experiences and even memories, the clouds literally part in the world for the two lonely Lisas, until a sudden pervasive thought breaks their halcyon honeymoon. Agita brews between the two as they realize the recoil of nostalgia, and trauma and disaster descend.

With indirect dialogue spoken entirely in past tense, set within an assisted care facility (designed by Owen Boss) littered with outdated, mind-numbing diversions—old TVs playing reruns, crocheted décor, board games and magazines from decades beyond retrograde—this production stitches every element to evoke lives sunken in time, insatiable for a future of their own.

The mastery of performing among these actors, Catherine Walsh and Eileen Walsh, are one in the same. With a “Persona”-reminiscent bond, the Walsh sisters exude and inhabit the other’s gestures in unparalleled performance, tottering in each other’s footsteps with jitters, flinches, and nervousness that meld through one another.

Catherine Walsh gives a stoic portrait of the uncertain, while Eileen Walsh brings a sharp elasticity to her character. With physicality that stretches her in every direction, and expressions snapping from over-exuberance to anxiety, Eileen Walsh and Catherine Walsh encapsulate the frazzled and fractured human life to heart-pounding, stunning depths.

The sole detraction of “The Same” is the pace of it, which in the production’s unceasing, mind-racing distress risks to lose its audience, for want of awareness. This one-act may prove to be a chore to follow, as it leaves little time to register what’s been said. However, it appears that the play relies less on attending to details than it does to culminate your focus in conveying a sensation of dread; which if it does, it has achieved its mission. Although for a few in this audience, that sense of dread might derive just as well from hoping they’ll understand what’s going on in time, before the play ends.

Similarly, the overflow of sound and music throughout had perhaps too adverse of an effect on the already disorienting play. The clamoring sound of rain and coastline, game programs, metronomes, muzak and menacing mood ambiance all compete for the ear, which, aside of overwhelming us, occasionally drowned out the actors’ meticulous words in a sea of over-stimuli.

The performance, regarded as “an immersive” production, immerses to the extent that its theatre-in-the-round style has audience members seated on stage around furniture and props, and the actors perform near them. While this facet does hem the audience into the inner-thinking of these characters, the production (unlike your standard immersive theatre) does not compel audience members to join the Lisas in madness, although one may feel welcome to afterwards. Waterworks spill and spray, as emotions get triggered; try not to be in the line of fire when they do.

Of the play’s text, “The Same” is another proud plume in playwright Enda Walsh’s hat.  As with similar pieces of his repertoire, it delves into characters attempting to cope with grief and dread, in subconscious monologues that lacerate between sedation, hysteria, and the side-effects of uncooked sausage rolls.

Walsh once more exacts and conjures the chaos hidden in banality with a dark, pyrotechnic flare of the tongue. Through measured dramatic prose that pirouette from his actors’ lips, Walsh’s words curl through the air like a surreal sonata, both angelic and colloquial, and spoken as always through unremarkable people.

While voracious and manic in tone, “The Same” revamps a timeworn feeling that all will recognize and know: the longing to be understood by someone else. It gives sense to what cannot be seen, to the alluring inescapability of our past, and the unnerving probability of fate.

Sensational and sensitive, this play may deserve a double-take.