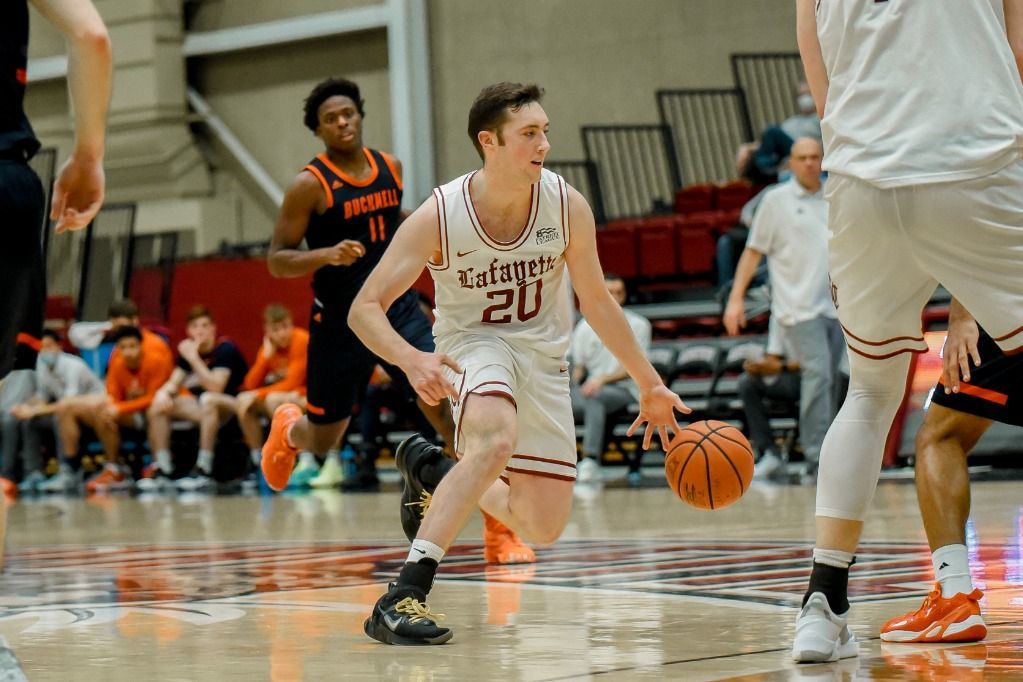 C.J. Fulton came through with some big plays in overtime to help Lafayette defeat visiting Bucknell, 74-72, in men’s basketball on Saturday. The 6-2 freshman guard from Belfast scored four of the Leopards eight points in the extra stanza on a layup and a jump shot. He also found an open Neal Quinn for the winning bucket with two seconds on the clock. Fulton finished with 15 points on 6-for-10 shooting (1-for-4 on bombs) and 2-for-2 at the foul line. On Wednesday, Lafayette (7-14 overall, 4-6 Patriot League) defeated American, 71-62. Fulton received credit for seven rebounds, seven assists and three steals; the latter two were game highs. He also scored five points on 2-for-5 shooting from the floor and 1-for-2 from the line.

James Beckom was gold off the bench for John Brown University in Saturday’s 75-70 road win over Oklahoma Panhandle State. The 6-3 junior guard from Cork clocked 28 minutes on the floor, made all five of his field goal attempts and two of three foul shots for 12 points. He also got credit for 12 points as the Golden Eagles ticked up to 16-9 overall and 10-7 in the Sooner Athletic Conference. He also earned the praise of JBU coach Jason Beschta.

“James was all over the place impacting the game at both ends,” Beschta said.

Ryan Leonard kept the stat man busy as St. Mary’s of Texas edged West Texas A&M, 100-98, in overtime in San Antonio last Tuesday. The 6-4 junior guard out of Tralee, Co. Kerry notched 15 points, nailing four of six attempts from both the floor (three of four from the Alamo) and the foul line. Two of those free throws were the final points the Rattlers scored in regulation. He also had six assists, five rebounds, five steals and two blocks. St. Mary’s is 10-8.

Felician swingman Sean McCarthy converted at a high percentage as the Golden Falcons won two of three contests last week. The 6-5 freshman from Cork scored nine points in Tuesday’s 92-78 loss at home to Dominican (N.Y.). He made three of five shots from the field and three of four from the foul line. He also grabbed five rebounds. Subsequent road victories over Nyack, 84-81, and Golden-Beacom, 91-81, saw McCarthy score four points in each, on a combined 4-for-5 from the field. The Golden Falcons are 12-7.

California’s Sam Alajiki was also spot-on, draining the two three-point tries he launched in Thursday’s 84-63 loss at home to Washington. A free throw increased his output to seven points for the evening. The 6-7 freshman forward from Dundalk added five rebounds and two assists in his 19 minutes off the bench. The Bears are 9-15 overall and 2-11 in the Pac-12.

Bronagh Power-Cassidy scored 13 points for Holy Cross in Saturday’s home win over Army. The 5-10 sophomore from Dublin made five of nine field goal attempts, including two of three bonus tries, and one of four foul shots. The Cross is 15-7 overall and 9-2 against Patriot League foes.

Katie Williamson scored six points for Southern Connecticut State in their 105-69 blowout win over St. Anselm in New Haven on Sunday. The 6-1 sophomore guard from Dublin connected on three of six field goal attempts. She also received credit for three assists and two blocks as the Owls improved to 8-10 overall and 5-7 in the Northeast 10.

Rice’s Amelia Kane, a freshman from Belfast, won the 500-yard freestyle in a dual meet with Texas in Austin. Her time of 4:53.43 was five seconds better than the runner-up. Texas prevailed, 156-103, in the team scoring.