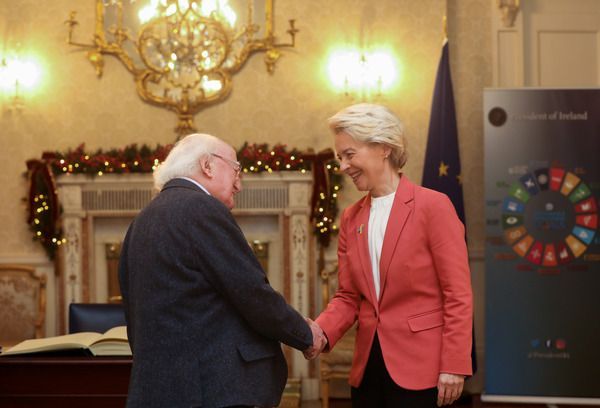 Ireland might be geographically on the edge of Europe, but in every respect is at Europe's heart.

European Commission President Ursula von der Leyen has told a joint sitting of the Houses of the Oireachtas that there can be no hard border on that European heartland, the island of Ireland.

The EU would continue to stand by the Belfast Agreement, she insisted. “There can be no hard border on the island of Ireland.” the EC president said to sustained applause, the Irish Times reported.

Speaking to the joint sitting on Thursday, Von der Leyen said that Brexit "will not become an obstacle on the path of reconciliation in Ireland."

She said any solution must ensure that the single market continues to function, and if both sides "are sensitive to this careful balance, a workable solution is within reach."

Ms. von der Leyen, according to an RTE report, said: "Europe was the incentive to look beyond the barbed wire" and heal North-South divisions.

She quoted John Hume who said that the EU was practical and inspirational.

"This has made Brexit even more painful for all of us" even as it brought the EU and Ireland closer together.

"All Europeans immediately understood how important it was to preserve peace on the island of Ireland. Ireland lies at the heart of Europe.

"Today all other Europeans look up to Ireland" as Ireland shows "Europe's best face".

"You are inclusive, loyal to your history and open to the future and the world. Ireland has made Europe a better place. Europe owes you."

Added the Commission president, and according to the RTE report: "Joining the EU has unleashed Ireland's immense potential and has profoundly transformed this country.

Ireland's GDP has gone from half to double the union's average. The ingenuity of the Irish people has "made the best of all the opportunities."

Speaking earlier on a visit to Government Buildings Von der Leyen said: "Now, indeed, we are in difficult times because Russia unleashed an atrocious war against Ukraine. First and foremost, I want to thank the Irish people, for opening their hearts and their homes to Ukrainian refugees. This is outstanding.

"I want to thank you for the strong support for Ukraine to become a candidate member of the European Union."