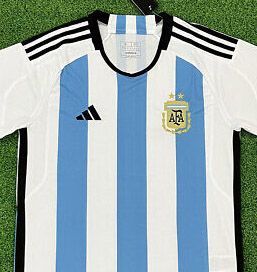 It is incredible that Argentina won, again, the World Cup, as on previous occasions in 1978 and 1986. We are all pleased about this. Today there are massive celebrations all around the country. Football is the main sport in Argentina.

On Sunday, at midday, when the team was playing the final, every shop was closed, nobody was in the streets......also the Mass schedule was postponed due to the big occasion that ended very successfully for us. We can say that, after suffering a lot watching the game....that God is Argentinean!

We are all, also, very happy for Lionel Messi, the most outstanding football player in the world. Before retiring he deserved to be a World Cup Winner. He is also the captain and the leader of the Argentine team.

And, considering the importance of the Irish-Argentine community, we must point out that among the members of the team is Alexis MacAllister, a well-known professional football player who is playing for the English Premier League at the moment.

Born in a football player's family, his father, Carlos MacAllister, was an international football player and also served as Deputy and Secretary of State for Sports in the Argentine national cabinet. His roots can be traced to Cushendall, County Antrim and the family relocated to the village of Donabate, near Dublin, from where they immigrated to Argentina in 1868. One of his cousins, Ricardo "Dickie" MacAllister, is a former president of the local Hurling Club and a member of the South American GAA branch.

The above is a guest editorial penned by Guillermo MacLoughlin, editor of The Southern Cross, the Irish-Argentine newspaper founded in 1875 and the longest continuously published Irish newspaper in the Western Hemisphere.