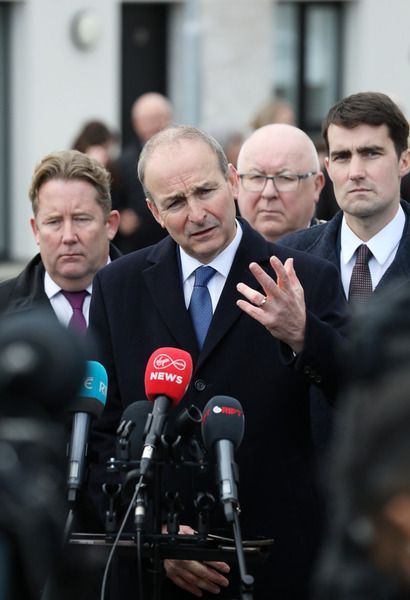 Taoiseach Micheál Martin will not be traveling to Russia anytime soon.

Mr. Martin has been banned from entering Russia by the Russian government.

So too have a large number of other top ranking Irish political figures.

Irish support for Ukraine and vehement criticism of Vladimir Putin's war are at the root of the ban.

Mr. Martin, by way of response, said he believed the move was part of the “propaganda war waged by Russia."

According to the Irish Independent, Russia said Wednesday that is was banning entry to 52 Irish politicians, accusing Dublin of waging "an aggressive anti-Russian propaganda campaign."

The ban, according to the report, was the latest in a barrage of largely symbolic moves by Russia against prominent figures from Western countries that have condemned its war in Ukraine.

The taoiseach said he was unaware of sanctions against him by Russia after Fine Gael TD Neale Richmond raised the matter in the Dáil.

Mr. Richmond repeated his call for the Russian Embassy in Dublin to be closed down and the ambassador expelled. But Mr. Martin yet again rejected this proposal.

“I thank the deputy for alerting me to this news that I’m sanctioned. It’s a new development. I don’t think I’ve ever been sanctioned before,” Martin said.

“We all have to stand together across Europe on this. Diplomatic channels are the last resort always,” he added.

Mr. Martin said he would study the Russian government statement and remain calm in any response.

“Diplomacy matters in the end of the day no matter how unpalatable it can be at certain times. So I think cool heads are always required in situations like this. We’ll see what has been said,” the taoiseach said.

Continued the Independent report: "However a spokesman for Foreign Affairs Minister Simon Coveney, who is also on the list of banned politicians and is currently on a visit to Washington, was rather dismissive about the news – and responded defiantly.

“This is all a distraction, Russia needs to stop killing civilians, destroying infrastructure and waging war. Irish politicians will be making no apology for being on the right side of history and on the side of international law and justice,” the spokesman told Independent.ie.

As a member of the EU, Ireland has joined sanctions against Russia over its invasion of Ukraine. Both Ireland and Russia has expelled some of the other country's diplomats.

The Department of Foreign Affairs said it was trying to find out who the politicians are that are being targeted by Russia's entry ban.

It did not receive prior notification of Russia’s new “stop list”, which sees 52 Irish politicians banned from entering Russia.

“No notification was received in advance, nor has a full list of those subject to this unjustified ban been provided,” said a spokesperson.

“Officials from the Department of Foreign Affairs are in contact with the Russian authorities to seek immediate clarification.”

A statement from Moscow accused Ireland of "acting under the dictation of Brussels."

According to an RTE report a statement from the Russian Ministry of Foreign Affairs said: "In response to the anti-Russian course of the Irish Government, which unconditionally supports the unilateral restrictive measures introduced by the European Union against Russian citizens aimed at attempts to isolate our country internationally, a decision was made to include 52 key representatives of the leadership and politicians of Ireland in the Russian 'stop list.'"