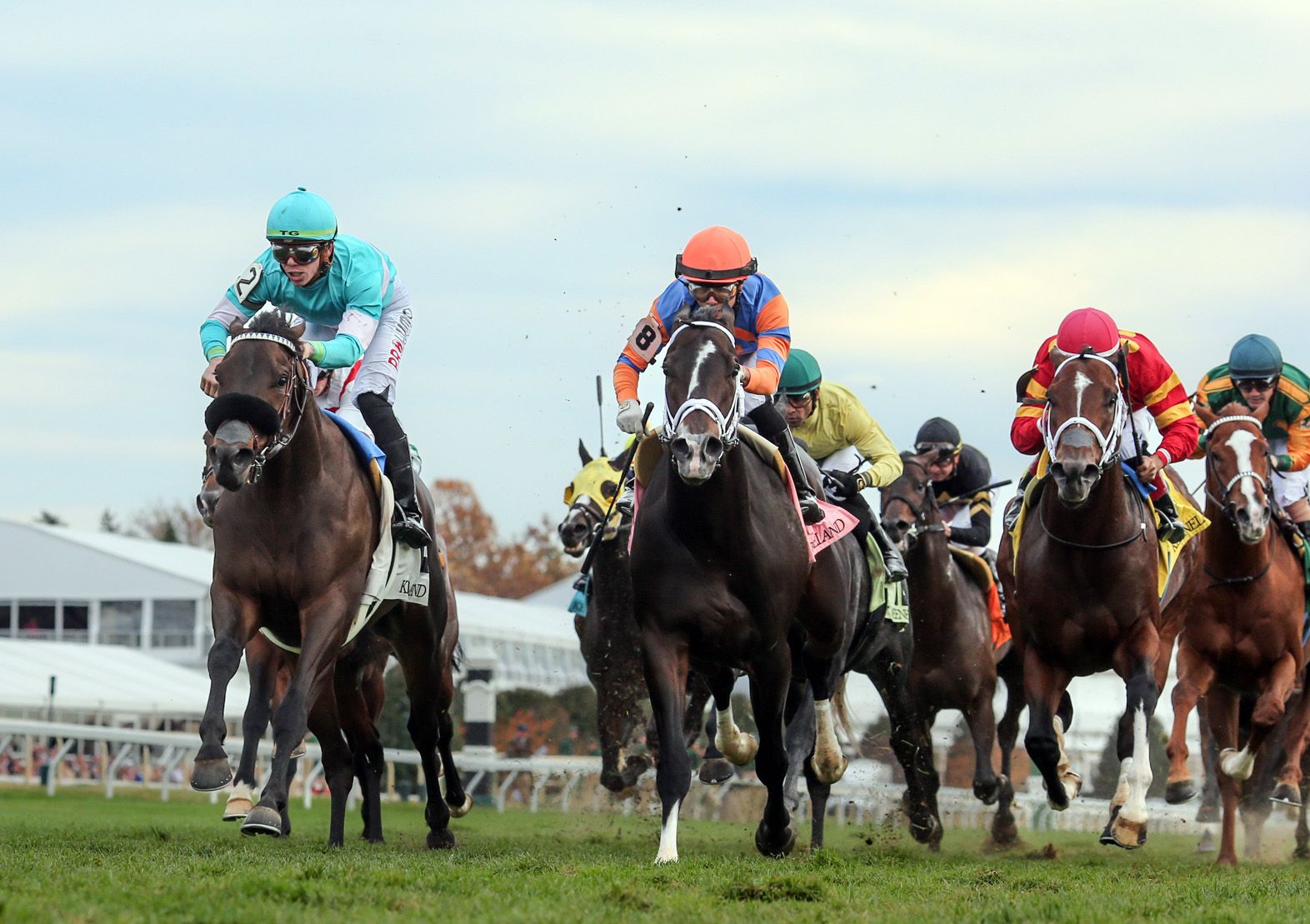 Tyler Gaffalione completes a long rally to get Balnikhov, # 2 at left, up to win the Bryan Station Stakes at Keeneland. [Coady Photography]

Victory in the Hudson Handicap at Aqueduct on Sunday ran My Boy Tate’s career earnings past the $800,000 mark. The 8-year-old gelding co-owned, trained and bred by Michelle Nevin stalked the early pace in this six and one-half furlong sprint, got the lead heading for home and won by two lengths. Irad Ortiz, Jr. rode the $15.20 winner.

Pat Gallagher bookended the week’s action at Santa Anita. He sent out Birth of Cool, owned by Flaxman Holdings and Marcstown Thoroughbreds to win Friday’s first race, a maiden claiming route on the turf. Umberto Rispoli rallied the 3-year-old gelding to score by almost two lengths in his 10th career start. He paid $14.60 to win.

Gallagher then saddled US Equine’s Angel Nadeshiko to a frontrunning score in Sunday’s nightcap, a first-level allowance/optional claiming mile on the main track. Victor Espinoza got the favorite home by just under a length for the $6.40 mutuel payout. Gallagher sports a 4-for-11 mark at the current meet.

Trainer Phil D’Amato continues to strike gold with his Irish-breds. He picked up three graded stakes victories on Saturday. Balnikhov, a 3-year-old gelding owned by a large partnership, rallied from far back and through horses to win the Bryan Station Stakes, a Grade 3 mile on the turf, on Keeneland’s closing day card. Tyler Gaffalione just did get Balnikhov up in order for ticket holders to claim the $15.28 win mutuel.

Out in California, Going Global added to her CV with a solid victory in the Grade 2 Goldikova Stakes at a mile on the lawn at Santa Anita. Rispoli had her forwardly placed, taking over the lead around the far turn and reaching the wire in front by one and one-half lengths. The Nicky Hartery product paid $2.60 to win. The 4-year-old filly ran her career earnings to over $1.137 million with the victory.

Later on the same card, D’Amato got a win from Rhea Moon in the Grade 3 Autumn Miss Stakes, also at eight furlongs on the grass. The 3-year-old filly rallied under Juan Hernandez to win by just over a length for her first stakes score. She returned $14.60 to win. She was bred in Ireland by Kevin Molloy and raced there for Ken Condon before she was shipped to California. Rockingham Ranch and Talla Racing now own Rhea Moon.

Carl O’Callaghan continues to reap rewards with County Clare Stable’s Moti, a 6-year-old gelding he claimed back in June. Moti won last Tuesday’s seventh race, a starter allowance mile over a sloppy main track, at Penn National. Angel Rodriguez got Moti home in front by three lengths for a $4.60 win mutuel. Moti is now 7-3-2-2 off the O’Callaghan claim.

James Graham completed a successful Keeneland meet with a couple more victories last week that gave him eight for the stand, which was good for a share of sixth place in the jockey standings.