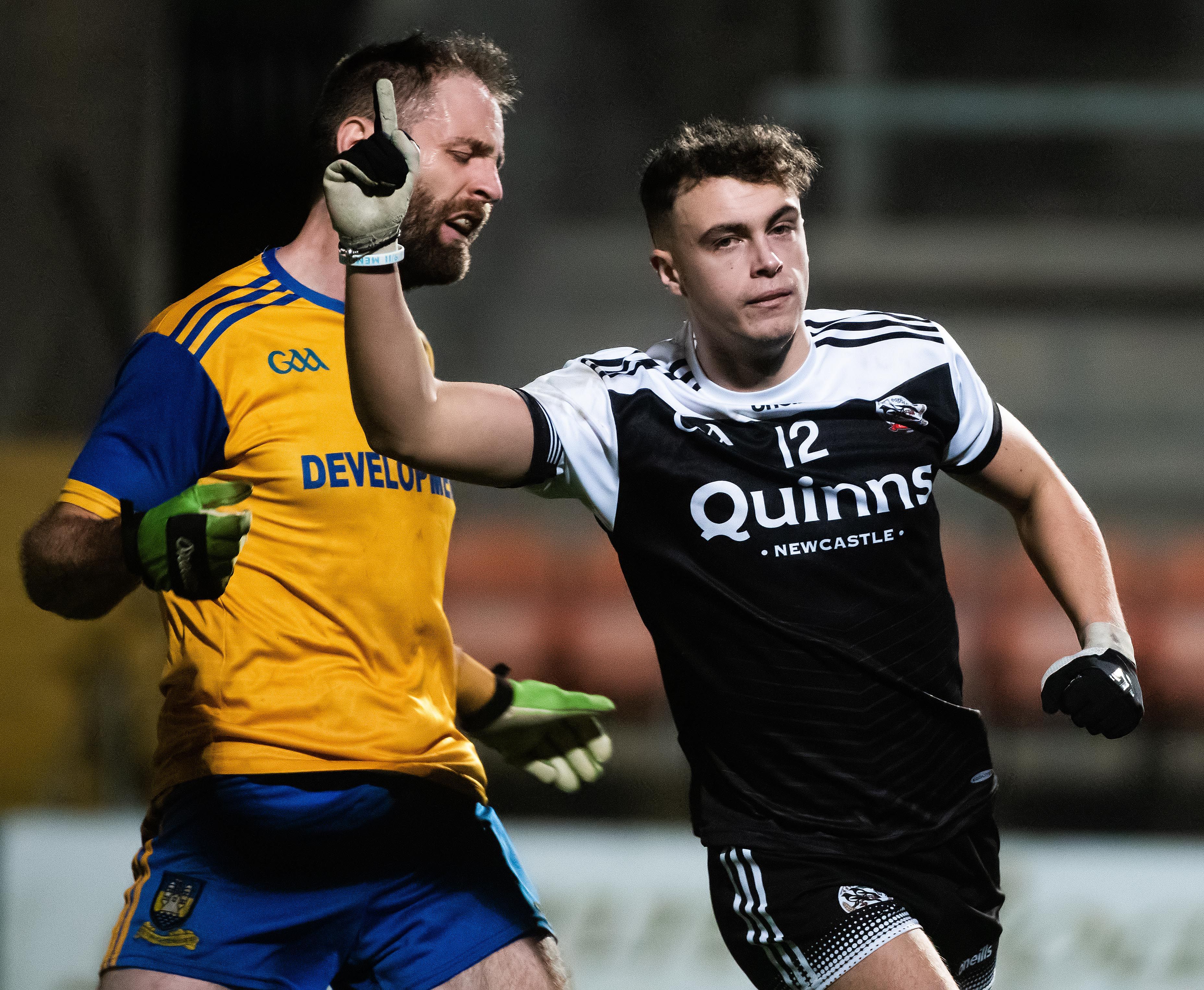 As if we didn’t know it already, Kilcoo gave us further evidence on Saturday that they would be formidable opponents for all other teams left standing following this 11-point drubbing of Enniskillen Gales at the Athletic Grounds in Armagh.

The men from Down followed the old adage that “a good start is half the battle” by running up a 13-point lead during the first-half, and thereafter they only had to go through the motions despite playing against the strong breeze on the turnover.

The Fermanagh kingpins tried to make a game of it when element-assisted but unfortunately they didn’t have the required sharpness up front to penetrate the tightly-knit winners’ defense.

Shealan Johnston’s reputation continues to grow and his two first-half goals settled the holders and once Aaron Morgan added a third, even Eoin Beacom's second-half strike made little dent in the overall complexion of the scoreline.

As a contest the beginning of the end lasted a mere 10 minutes before Johnson eluded his marker to crack home the opening goal of the contest.

The tactic by Enniskillen of using their goalkeeper Cian Newman to join the outfield play in the hope of creating an overlap situation worked well until his intended off lead was intercepted and fed to the lethal Johnson to dispatch his second green flag on the cusp of the half-hour.

Ahead by 2-8 to a mere 0-1 at the break, there was no one expecting miracles thereafter  but it must be said that the appearance of Eoin Beacom from the bench certainly added to the challengers’ luster on the attacking front.

He slotted over a couple of fine points to give his side a little more hope, and when Ryan Johnson was thwarted by an amazing Newman save, it looked like there might be a bit of a comeback.

Beacom was carrying the fight single-handedly and when he goaled on the 45th minute with a rasping shot, it rose expectations even further.

However by committing all out to attack, the Gaels were vulnerable at the back and within seven minutes, Kilcoo had got their third goal through midfielder Aaron Morgan who punched the clincher home.

This was football fare to turn people off Gaelic football in their droves as both team played a possession game which often saw dozens of hand-passes go forward and backward, and sideward and then back again at Healy Park on Sunday.

Derry champions Glen deserved the win but played most of the game trying to keep a point or two ahead and it was only a Danny Tallon penalty which made the scoreline look a bit more secure at the end.

Glen will now face Kilcoo for the second year in succession and on the evidence of the two semi-finals, they will find it difficult to live with the highly organized and skillful Down team, particularly its star-studded attack.

Credit to Antrim’s representatives Cargin, who fought gamely to the end and were within a kick of glory until the late penalty put the game beyond them. They faced the breeze in the first half and must have fancied their chances when they turned around only a point in arrears on 0-5 to 0-4.

Glen upped their energy input considerably against the wind and took control of the ball in the third quarter.

It was only on 47 minutes when Ciaran Bradley kicked a point  seconds after being introduced that the losers could claim their first score from play – an indictment on the forward line which seemed unable to get in behind a very stick full back line intent on pushing their markers away from goal on every occasion.

Kerry All-Ireland winning star David Moran saw red within 22 minutes of this game and it opened the door for Clare side Éire Óg to progress to the Munster final.

They tried with all their might but even with an extra man for over 30 minutes, until  after Mark McInerney was sent off for a double yellow for the Banner boys,  they came up agonizingly short in this keenly contested battle.

The Tralee side, who are the county senior club but not senior football champions,  are now in their first final for 13 seasons. They went ahead in the first minute and were never overtaken despite having the extra man.

Éire Óg this week will be kicking themselves for at least not forcing extra time  when in the 58th minute they got the ball to Philip Talty. A point in arrears at that stage, the normally reliable attacked made a mess of his shot from just outside the 13 meters line and the Kerry kings cleared to victory.

In the other Munster semi-final, there was something of a surprise when Limerick champions Newcastle West  came out on top against Clonmel Commercials, who had beaten Cork’s Nemo Rangers in the quarter-finals, by 1-16 to 1-11 after extra time.

Commercials led by a point at the break with Sean O’Connor scoring the goal on the cusp of the short whistle before the Limerick lads edged the second half to force extra-time.

A goal by Emmet Rigter as the last act of the first half of that period gave the Westies a great boost and they increased their lead to run out five point winners.

Kilkenny giants Ballyhale Shamrocks had their beard pulled by an enthusiastic Naas opponent early doors in this match but there would be no David vs. Goliath ending as the Marble Men ran out convincing 12-point winners without ever getting out of third gear at Croke Park on Sunday.

The Shamrocks will be odds-on to beat Kilmacud Crokes in the final, who despite their 12-point drubbing of Carlow’s St Mullins, appear to face a huge step up in class in the final.

The Kilkenny side are now closing in on a four-in-a-row for Leinster club senior club titles  and more than anything will be out for revenge for their loss in the All Ireland final to a last minute Ballygunner goal, though they had to overcome that early scare at Croke Park to secure their place in next Sunday's final.

Surprisingly, they were six points down in this game after only 10 minutes as the Kildare boys went about their task with elan and enthusiasm but goals from TJ Reid, who hit 1-6, Joey Cuddihy and Eoin Cody turned the match around in a matter of minutes.

In the other semi-final played later also in Croke Park, Dublin holders Kilmacud blew away St Mullin’s from the start and ended up winning comfortably despite conceding a late goal.

The club now will hope to go on and complete a provincial double as their footballers face the Downs from Westmeath in the football decider – both of which are taking place at Head Quarters at the weekend.

While the big ball team will be overwhelming favorites to repeat back-to-back successes, the hurlers will be very much the outsiders against the Ballyhale juggernauts that has dominated the province in recent times.

From the time Ronan Hayes galloped through to fire home Crokes goal, the game became a non-contest while the accuracy of Oisin O’Rorke in slotting over 0-11 meant the south Dublin side kept the scoreboard constantly ticking over.