Home Champions Kilcoo bring Ballybay back down to earth 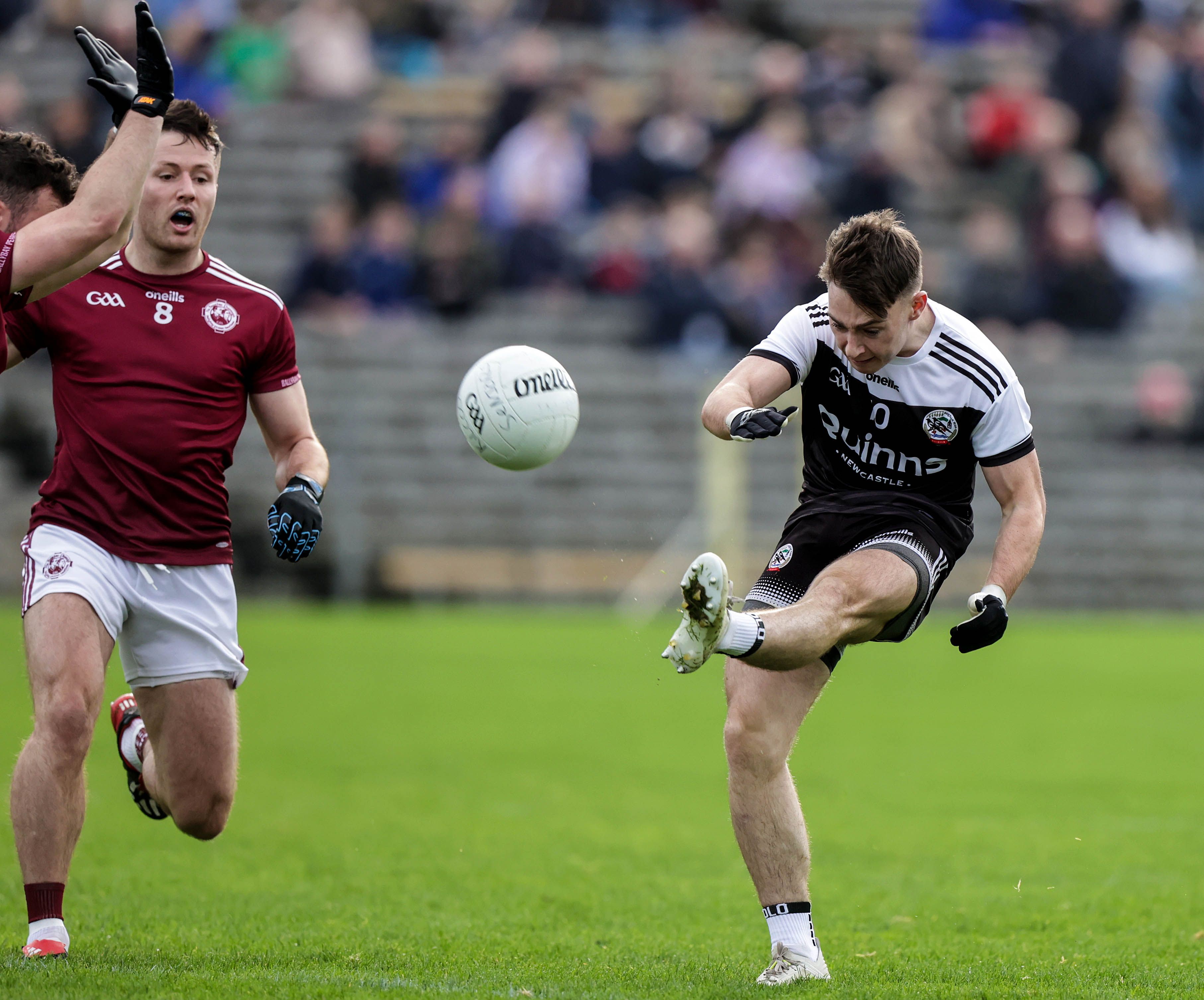 Champions Kilcoo bring Ballybay back down to earth

There are heavyweight contenders… and then there are teams like Kilcoo. Monaghan side Ballybay must have had notions after their excellent win last week against Armagh super team Crossmaglen but they were brought back down to earth by the current Ulster and All-Ireland champions, Kilcoo of Down in Clones on Sunday.

It ended a double-scores encounter and that was about the difference between the sides if you looked at the dominance of the Down holders against their Farney neighbours.

And they sent out a warning not just to their provincial but national  opponents that they haven’t gone away you know or appear likely to do so for some time.

Kilcoo were full value for their three-point interval lead, having played into the breeze, before goals by Ryan Johnston and Míceál Rooney book-ended a composed second-half performance by the Magpies.

Down man Mark Doran took sole charge of Ballybay in the absence of Jerome Johnston Snr but his fellow county-men called on all their experience and running power to kickstart their title defence.

Converted frees by Jerome Johnston (mark), Paul Devlin and goalkeeper Niall Kane got Kilcoo off to a strong start, before Ceilum Doherty kicked the only score from play of the opening quarter to move them four clear.

A Thomas Kerr '45 belatedly got Ballybay off the board on 12 minutes and they were suddenly back on level terms when Shane McGuinness coolly tucked away his second penalty in two games, but an inspirational point from Ryan McEvoy helped ensure that Kilcoo would never trail in this game.

Further points from Ryan Johnston, Aaron Branagan and McEvoy extended Kilcoo’s lead and although Colm Lennon got Ballybay’s first point from play in added time, the holders changed ends ahead by 0-08 to 1-02.

A trademark Paul Finlay effort brought Ballybay back within two after the restart, but Kilcoo pushed on when a sharp lay-off from Conor Laverty sent Ryan Johnston through to crash a powerful shot to the net.

Finlay and Ciarán Galligan kept the Monaghan champions in touch, but Devlin, Aaron Branagan and Doherty replied to double Kilcoo’s advantage to six.

Aaron Toner rifled a goal-attempt over the bar as Ballybay chased a way back into the game, but Laverty point made him Kilcoo’s ninth scorer of the afternoon and they put the game beyond reach late on when a slick move through the hands of Seán Óg McCusker and Ryan Johnston teed up Rooney to palm home their second goal.

Devlin added a brace of superbly struck placed kicks (a free and a ’45) as Kilcoo powered through to a provincial semi-final against Enniskillen Gaels.

A game of two halves and two outcomes! Errigal looked the part in the first half but the Derry air was full of intentions afte the half-time pep talk by Malachy O’Rourke saw come out and pull up trees for the entire second half to win easily by four points in the end at Celtic Park on Sunday.

It will be interesting to see how they perform against Cargin in the semi-final but they showed resolve and teamwork in coming from  four behind at the interval to rule the roost in this game.

The Tyrone champs looked likely winners until the impressive Ethan Doherty got in for a goal which got the teams back on parity six minutes into the second half.

Thereafter, the Derry boys had a bounce in their play as they began to dominate starts and restarts with sub Stevie O’Hara a revelation as he landed a brace of points and gave direction to his side’s play.

Errigal thought they were back in the ballgame when Ruairi Canavan, son of the legendary Peter, thought he had bundled the ball in for a goal only for referee Paul Falool to rule it out for a square infringement.

Penalty verdicts are becoming more and more the decisive factor in deciding GAA games and for Enniskillen Gaels the joy of such a dramatic win was evident while for the dejected Cavan men, Brewster Park was like a burial ground once again on Saturday evening.

Enniskillen Gaels sealed their place in the last four of the Ulster Club SFC with a dramatic penalty shoot-out victory over Cavan champions Gowna in Brewster Park on Saturday night.

Truth be told, they were just a shade the likelier for most of the game but it looked like their luck was out when Cian Madden’s majestic free gave the Gowna men the lead with added time as good as up.

It seemed that the Gaels wouldn’t get the chance of a reprieve but Eoin Beacom big hit from out the country meant the play was extended into extra time.

Once there, it was Gowna who looked the more impressive as they raced into a quick three point advantage. Back came the Fermanagh lads again and Conor Love’s brace of points set the denouement up for a shoot-out.

Enniskillen threw down the gauntlet which was answered until Cian Madden had his effort saved by Cian Newman. Ciaran Smith then stroked home the decisive shot to put his side into the semi-final.

Do it once and you could be considered lucky – do it twice and, well, there can be no complaints as once again Tipp football grew in stature as Commercials delivered a 7-point defeat to Nemo Rangers at Páirc Uí Chaoimh on Saturday.

They now face Newcastle West in the semi-final and will be confident of going all the way to the final with men like Jason Lonergan and Colman Kennedy leading the way.

Take away Luke Connolly’s six-point contributions from free and a late consolation green flag from Mark Cronin and all you have to look at is a five point contribution from the rest of the squad. Good enough for Cork club fare maybe, but way off the pace at provincial level.

Commercials had heroes all over the pitch with Lonergan’s man of the match performance including half a dozen points while an array of Kennedys played well, particularly Colman, who made a goal for Sean O’Connor as well as taking one for his own personal account as well.

The gulf in class was evident on the scoreboard as it was on the football pitch where first time mayo winners Westport had no answer to the pace and power of Moycullen, who could be the surprise packet of this series following their display at Hastings Insurance MacHale Park in Castlebar on Sunday.

If there was magic in the air with some of their play over the hour, then the sorcerer-in-chief was winning skipper Dessie Connelly, who scored 10 points in an MVP display.

After both sides had felt each other out in the first quarter, it was Moycullen who kiced on and hit 1-8 to  a mere 0-2 from their opponents before second half goals from  Michael O’Reilly and substitute Aidan Claffey put the game to bed as a contest.

Every competition experiences a shock in a season but for two to arrive in the one weekend in the Leinster hurling certainly has people scratching their heads.

While Carlow hurling has produced a banana skin or two recently, it was Kildare standard bearers Naas who stole most of the thunder on Saturday after walloping Offaly new winners Shinrone by 15. Points at St Conleth’s Park in Newbridge.

With Jack Sheridan to the fore in landing 1-11, the Naas club can now look forward to going toe-to-toe with current champions Ballyhale in Croke Park at Croke Park.

The giant killers had goals from Charlie Sheridan, Kevin Aherne, James Burke and Jack Sheridan which buried the Offalymen who were favoured to win the game.

Wexford hurling is no longer what it was at either county or club level. Or is that being disingenuous to Carlow at the same levels for the way the game has progressed in Leinster’s second smallest county?

Either way it is St Mullins who are still in the draw after causing quite a shock in dumping the men from the Model County out of this year’s Leinster series at Dr Cullen Park on Sunday.

Marty Kavanagh  scored seven points in the first half they led at half-time by 0-12 to 1-6, with Paul Morris cracking home the Wexford goal.

The second half turned into an arm wrestle especially after midfielder Conor Kehoe beat James Lawlor with what looked like a major change. Their mindset changed then and it allowed Ferns to chip away at the lead until Benny Jordan’s point meant there was only a point between them.

Kavanagh fired over to his fans’ relief but that gave them a perilous two-point advantage. Aidan’s came in search of a late goal to win the match but the Carlow boys held on for a famous win.