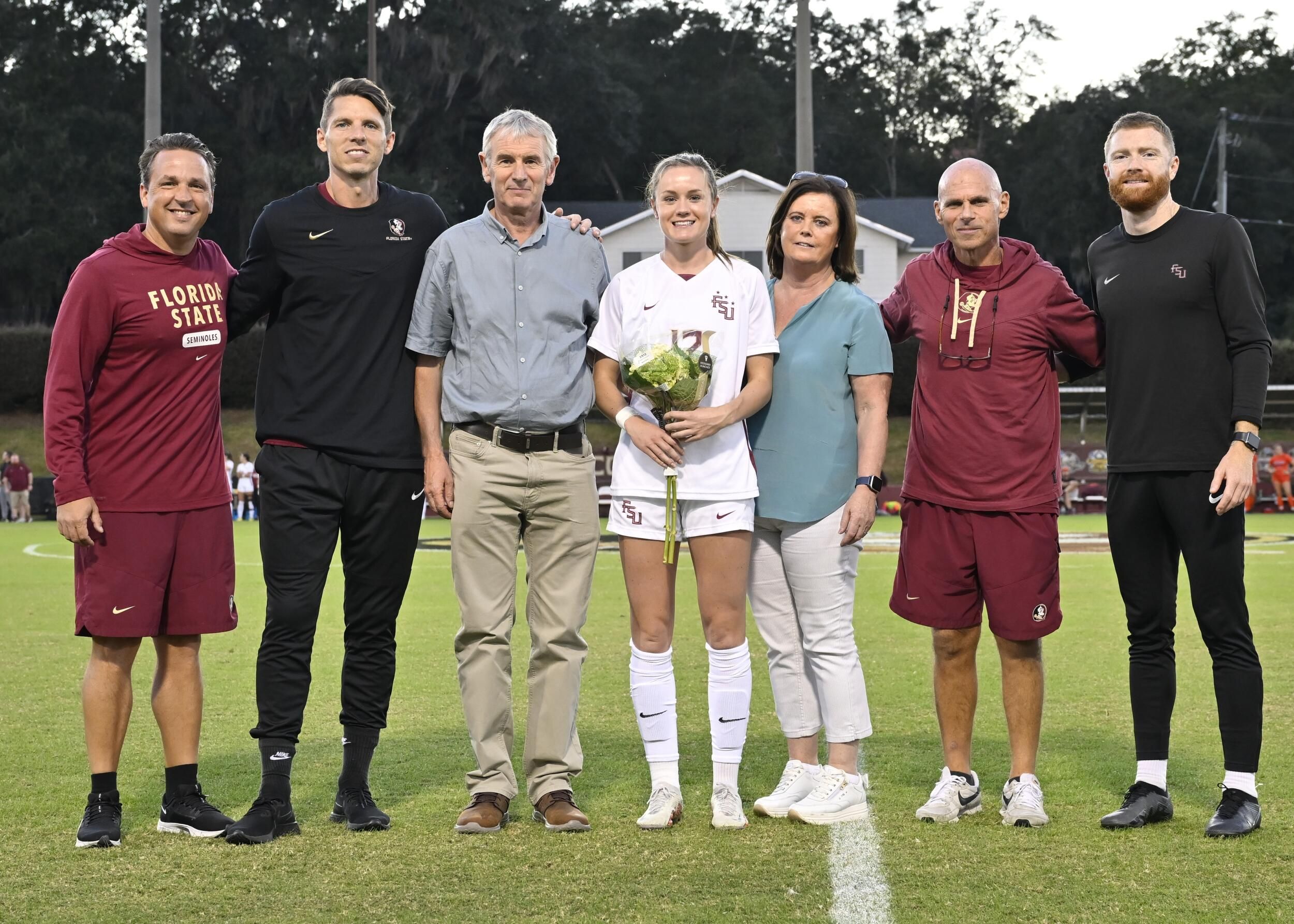 Heather Payne is flanked by parents Brendan and Grainne and the coaching staff of the Florida State women's soccer team during Senior Night Celebrations in Tallahassee, Fla.

Saturday’s Big East Cross Country Championships in Attleboro, Mass. were something of an Irish celebration of the sport. The winners of both the men’s and women’s races hail from Ireland as does the coach of the team that carted off the trophy as top men’s squad.
In the men’s race, Barry Keane of Butler University led the field, including six other Irish, home. The Waterford senior’s 23:15 for 8,000 meters was fastest. Villanova’s Charlie O’Donovan, a senior from Cork, was fifth in at 23:34. Providence College sophomore Shane Coffey, a sophomore from Naas, Co. Kildare, got 15th place in 24:00, followed by teammates Abdel Laadjel, a sophomore from Lucan, Dublin, 24th in 24:25, Michael Morgan, a sophomore from Sligo, 26th in 24:28, and David McGlynn, a senior from Williamstown, Co. Waterford, 28th in 24:31. Butler’s Evan Byrne, a senior from Cork, finished 33rd in 24:54.

Marcus O’Sullivan’s Villanova Wildcats outpointed Ray Treacy’s Providence Friars 27-55 to bring the trophy back to Pennsylvania. This is the sixth time that the Irish running legend has coached the Wildcats to a Big East cross country title.
Providence College freshman Jane Buckley won the women’s race. The Cork lass became the 13th Friars runner to claim this title.
“I wasn’t expecting [this], to be honest, because this was my first Big East competition,” Buckley said. “I’ve only ran three races here so far. This one was definitely different because the last two races there were 400 people [running], so it was nice,” she remarked about a field of “only” 96 runners.

WOMEN’S SOCCER
Aoife Horgan scored the winning goal and set up an insurance goal for Central Connecticut State in the Blue Devils’ 2-0 victory over St. Francis (Pa.) in New Britain, Conn. on Thursday. She is a sophomore forward out of Ballybunion, Co. Kerry. Mick D’Arcy’s squad is 9-5-2 overall and 7-0-2 in the Northeast Conference.
Heather Payne earned an assist on Florida State’s second goal in a 4-1 victory over Virginia Tech in Tallahassee on Thursday. She is a senior from Ballinasloe, Co. Galway. The Seminoles are 12-2-2 as they defend their NCAA Division 1 national championship.
Katelyn Keogh scored twice within three minutes for Trevecca Nazarene in Saturday’s 4-2 road loss to Findlay in the quarterfinal round of the Great Midwest Athletic Conference tournament. Earlier in the week, the Trojans (9-6-4) closed out the regular season with a 7-1 pasting of Kentucky Wesleyan on the road. Keogh, a sophomore from Athlone, Co. Westmeath, scored one of those goals and set up two others.
Aislinn Meaney scored the winning goal for Indiana (Pa.) in last Wednesday’s 3-0 victory over visiting Pitt-Johnstown. The senior forward from Ennis, Co. Clare nailed her fifth goal of the season in the 53rd minute. Noreen Herlihy’s Crimson Hawks are 5-4-7.
Amanda McQuillan made four saves in New Haven’s 5-0 victory over Queens (N.Y.) in West Haven, Conn. last Wednesday. She is a grad student from Johnstown, Co. Meath. The Chargers finished the regular season with a 5-10-2 record.

MEN’S SOCCER
Matt Whelan booted in the winning goal as Davenport defeated St. Cloud State, 3-2, in first round action of the Great Lakes Intercollegiate Athletic Conference tournament on Sunday in Caledonia, Mich. Earlier in the week, the Cork senior accounted for both tallies in the Panthers’ 2-0 win over Purdue Northwest to end the regular season. Davenport is now 7-7-3 ahead of Friday’s GLIAC semifinals match with Parkside.
Sean Quinn scored his first goal of the season to allow Tampa to leave the pitch tied at 1 with Florida Tech at home last Tuesday. He is a junior midfielder from Dublin. The Spartans are 7-6-3.
Conor Behan scored on a turnaround shot to put UNC-Asheville on the board in a 2-1 win over Radford on the road on Saturday. That was the Dublin junior’s second tally of the season. The Bulldogs are 2-10-4.
Sean Kerrigan had a goal and an assist as Mercyhurst defeated crosstown rival Gannon, 2-0, in Erie, Pa. last Wednesday. The Sligo sophomore finished the regular season with 18 goals. The Lakers are 17-0-1.
Sam O’Callaghan set up Brevard’s goal in Saturday's 1-1 tie at home with William Peace. He is a junior back from County Wicklow. The Tornados are 10-5-2.
Niall Owens earned an assist on the goal that enabled Palm Beach Atlantic to tie Nova Southeastern at 2 in West Palm Beach, Fla. last Thursday. He is a grad student from Tempo, Co. Fermanagh. The Sailfish are 8-5-2.

FIELD HOCKEY
Siofra Murdoch converted a penalty stroke nearly seven minutes into overtime to provide Harvard with a 2-1 victory over Cornell in Cambridge, Mass. on Saturday. The sophomore midfielder from Dublin now has four goals this season. The Crimson improved to 12-4.
Providence College closed out a 5-12 season with a 4-2 loss to Quinnipiac in Hamden, Conn. on Friday. Niamh Gowing, a grad student from Dublin, scored the first goal of the contest in the eighth minute. She finished the season with four goals and two assists.
Rachel Houston, a senior forward from Hillsborough, Co. Down, scored Rutgers’s lone goal on a rebound in Friday’s 3-1 loss to Penn State in Piscataway, N.J. The Scarlet Knights are 8-9.

WOMEN’S GOLF
Louisville’s Mairead Martin held the lead after the first two rounds of the Olde Stone Intercollegiate in Bowling Green, Ky., having shot 72 and 71, but a final round 76 consigned the senior from Kanturk, Co. Cork to seventh place. She finished the event five strokes behind the medalist, teammate Carmen Griffiths. Indiana senior Valerie Clancy, from Mitchelstown, Co. Cork, tied for 20th place after rounds of 76, 74 and 75.

MEN’S GOLF
Jack Hearn’s closing 67 was low score for the round and led South Alabama to the team title in The Clerico at the Oaks Country Club in Tulsa. The senior from Carrick-on-Suir, Co. Tipperary paired that with an opening 73, which left him joint-third, three strokes off the low score.
Jordan Logue of Mississippi College tied for fifth place in the Matt Dyas Invitational at Oak Mountain in Carrollton, Ga. The Belfast senior had a share of the lead after his first-round 72 but then slipped with subsequent rounds of 76 and 73. That left him seven strokes off the winning score shot by Blake Henriques of Shorter University, the only man to break par for 54 holes.
Oakland City University’s Irish pair worked out top 20 finishes in the National Christian College Athletic Association tournament at the Hammock Beach Resort in Palm Coast, Fla. Kyle Honer shot 73, 79 and 77 for a share of 11th place at 13-over-par 229, while Jack Dolan signed to 82, 80 and 75, which got him a share of 20th place. Nobody broke par in this event, in which 2-over 218 was low score. Honer and Dolan are freshmen from Dublin.