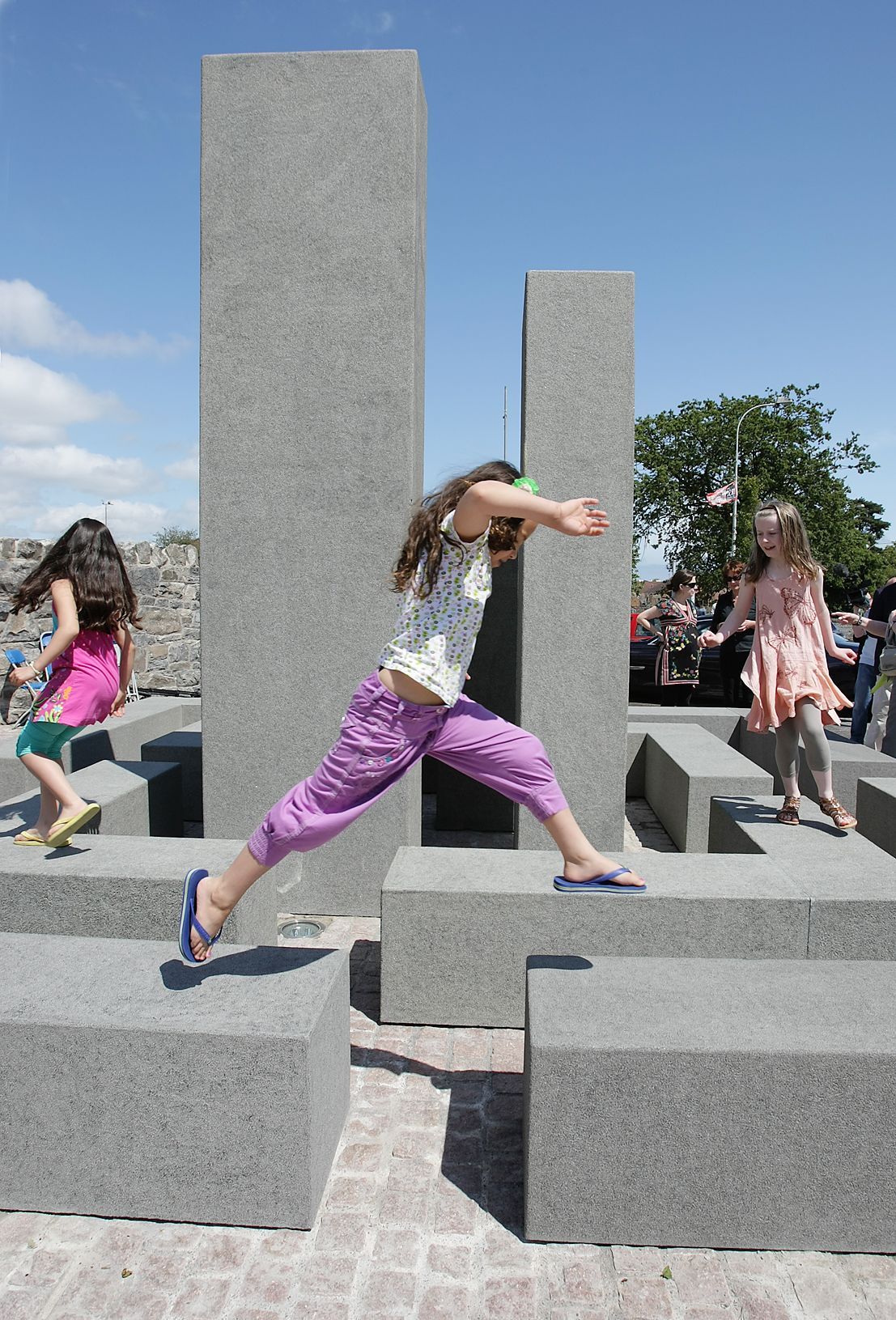 LÉIMIGÍ: Children playing on Teanga-Aisling an Phobail on the day of its unveiling in June 2011

The death has taken place in New York of esteemed Irish American artist Brian O'Doherty (94) whose Teanga-Aisling an Phobail artwork stands at the entrance to Coláiste Feirste on the Falls Road, Belfast.

Laoch ar lár: Patrick Ireland’s (AKA Brian O’Doherty) Big H was first shown in the Orpheus Gallery, Belfast, in 1989 and was his own reflection on the H-Block struggle. Brian O’Doherty passed away in New York this week - táimid buíoch de. pic.twitter.com/dBbUfnTYlD

A former art critic with the New York Times, author of several seminal works on art, a performer and an artist, O'Doherty enjoyed a special place in the heart of Derry nationalists for changing his name to Patrick Ireland in protest at the Bloody Sunday shootings of January 1972.

By 2008, with huge progress being made towards peace and justice in the North of Ireland, O'Doherty decided to take his name back. What followed was a major performance art 'happening' at the Museum of Modern Art in Kilmainham for the elaborate funeral of Patrick Ireland, complete with 400 mourners representing the cream of the European art world.

That send-off was captured in a memorable pictorial-feature for the New York Times by photographer Derek Speirs.

We were sorry to hear of the passing of Brian O’Doherty. His extraordinary work has left an indelible mark on the art scene in Ireland and beyond. His artistic alias, Patrick Ireland, was born at Project in 1972 as a protest against the Bloody Sunday Massacre in Derry. pic.twitter.com/njEBB7aphm

A headstone still stands in the spot where a coffin containing O'Doherty's 'death mask' was lowered into the ground as keening women mourned his passing.

In 2011, O'Doherty's 'Aisling an Phobail' celebrating the Irish language was opened at the entrance to what was then Beechmount Leisure Centre on the Falls. A set of standing stones depicting the centrepiece of a St Brigid's Cross, the stark labyrinth has since been 'dressed' by pupils of Coláiste Feirste in a series of works saluting the local community and paying homage to the New York artist.

Author of the hugely influential Inside the White Cube (1986), for many years he was known by the alter ego, Patrick Ireland.

In the seventies, Patrick Ireland invented a new form of art using rope - where cords are drawn from a wall to the ground gave a 3D effect to mural paintings. This series included a major piece called the Big H which reflected the suffering of the blanket men. That piece was reproduced for a Belfast International Arts Festival exhibition in the Golden Thread Gallery in 2011.

Artist Robert Ballagh described O'Doherty as "the father of conceptual art in America". "He never forgot his Irish roots," he said of the midlands man who emigrated to the US as a qualified doctor in the 1950s. "He was a very significant figure not just for his art but because of his wide range of interests - for example, though he himself was an abstract artist, he wrote a book and made a film on Edward Hopper who style was very different from Brian's."

Robert Ballagh also praised O'Doherty's generosity. "He was very helpful to many Irish artists who travelled to US and with his wife Barbara Novak, he donated an extensive collection of works to the Irish national museums, including works by artists not previously in any Irish state collection."

Among the more eclectic of the late artist's interests were his work on the old Celtic script Ogham and the creation of The Painted House in Todi, Italy, a holiday home which he covered with his stylistic murals. The Painted House is now maintained as a museum by the local council of Todi.