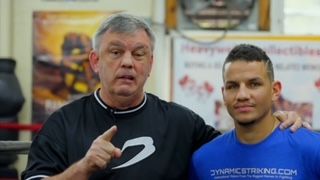 Teddy Atlas’s name has long been associated with success and excellence in “the sweet science.” One of boxing’s most respected trainers and analysts, he’s worked with numerous world champions -- and even some Irish fan favorites.

You can count among the latter former world featherweight titlist Barry McGuigan, aka the “Clones Cyclone;” The late Chris “The Shamrock Express” Reid, who challenged for the world super middleweight title, and Jimmy McMahon, the retired Mayo welterweight.

Other notable fighters linked with Atlas include world heavyweight champs Michael Moorer and Alexander Povetkin; Timmy Bradley, a world welterweight title holder, and, of course, Mike Tyson.  “Iron Mike” appeared on Atlas’ resume when both were young and the trainer was serving his apprenticeship of sorts at the Catskills training camp run by the legendary Cus D’Amato in upstate New York.

Nowadays, Atlas, whose mother hailed from Cavan, can count a massive virtual stable of fighters, would-be fighters and ordinary joes and janes eager to keep in shape and better themselves psychologically.

Atlas was approached by Dynamic Striking – through his lawyer daughter -- to develop the videos sharing his rich and deep boxing knowledge that was previously only the preserve of some of the world championship fighters he’s trained.“Fundamentals of Boxing,” was the first video -- and an instant hit.

“They called up my daughter and said it's a top-seller, so we’d like to do another,” said Atlas.

He’d oblige them with a series of training videos covering some of the best and most intriguing boxing techniques.

“We did The Peek-a-Boo,” said Atlas. “There’s a mystique about the peek-a-boo because it’s Mike Tyson, Floyd Patterson, and Cus D’Amato -- but there’s nobody left that really, truly understands how to teach it.”

Other titles include “Signature Punches of Great Fighters,” of which Atlas said: “So, I came up with 14 legitimate ones -- the bolo punch from Kid Gavilan, the leaping left hook from Floyd Patterson.”

Then there’s also the “Different Ways to Throw a Jab.” Atlas demonstrates 14 of them.

And what’s boxing without body punching? Atlas covers that, too. “Very important! It’s a science on its own – a lost science,” he added.

Atlas includes all these, along with titles such as “The Lost Art of Feinting” and other videos on developing ring skills, in a 15-series collection.

“I came up with 15 – like the old school 15 rounds. And I called it “The World of Atlas” where you visit different worlds. You visit the world of legs, the world of jabs, the world of defense, the world of counter-punching, combination punching. So, they loved them. They said beautiful.”

Delighted, Dynamic Striking wanted more. Atlas decided to kick it up a notch.

“I’ve always said over 20 years on ESPN [that] 75 percent of fighting is mental,” he explained. “So, that’s the cement. All these other things [jabbing, feinting, counter-punching, combination punching] are the bricks that you build on. But without the cement, the bricks get loose, they come out of place, they fall. To keep them in place, you have to have cement, the cement is the mental part.”

The first video, for both professionals and amateurs, focuses on developing mental strength for fighters to  control their inhibitions, insecurities and fears.

“Fear is your greatest friend,” the trained pointed out. “We have it for a reason, and we need to learn to control it.”

Atlas’ second video helps both aspiring fighters, white collar boxers, as well as ordinary people overcome their fears; while the third is aimed at helping targets kids, and their parents, deal with bullying.

“It’s for kids out there, the parents, that are being bullied in this terrible world of cyberbullying, where cowards can exist in shadows,” said Atlas. “My message is that you are not the weak one, they [the bullies] are the weak ones because that’s how they feel stronger, by preying on someone who they thing is vulnerable, and that’s a false strength.”

Regarded as a master motivator in addition to his training skills, Atlas has gone beyond the gym environment, where he’s excelled for decades, to share his knowledge with boxing aficionados worldwide. His videos are available at: https://dynamicstriking.com/