Home Stolen and stirred is how Graham serves them up 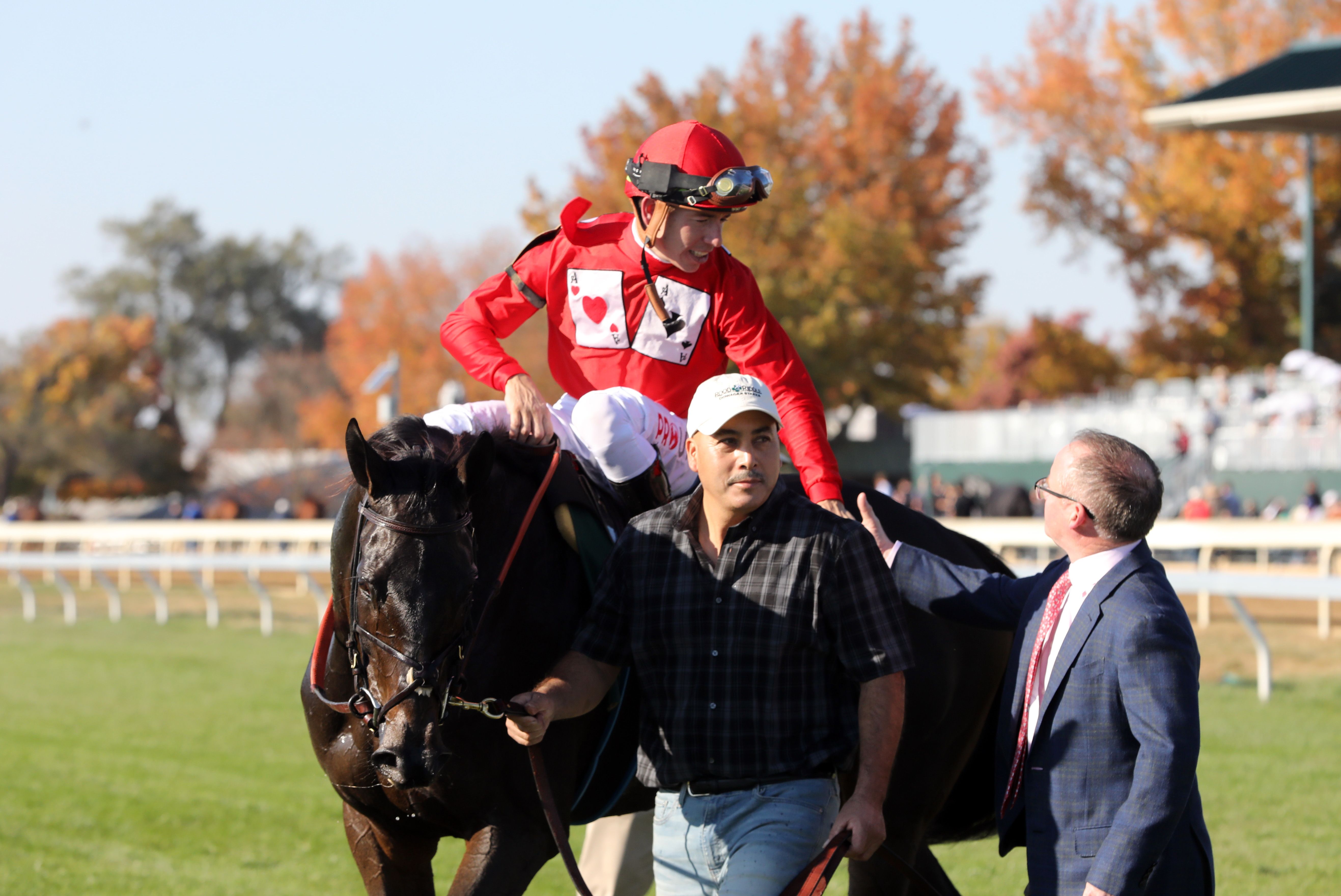 Stolen and stirred is how Graham serves them up

These haven’t been the best of times for jockey James Graham. The Dubliner lost his position as stable rider for Tom Amoss and has found mounts less plentiful than when his name was prominent in the jockeys table. But he served notice last week at Keeneland that he is not to be discounted.

Just when everyone had one eye on the exit on Wednesday, Graham dropped a 21-1 bomb in the nightcap, unleashing a furious rally on Aboukir Bay to get up by just over a length in this allowance sprint on the grass. The win mutuel came back $44.50 on this Jason Barkley trainee.

That was a mere appetizer to the entrée which Graham served in Thursday’s seventh race. Joe Sharp gave him a leg up on Fancy Martini in this allowance route on the grass and the wagering public can be described as both shaken and stirred as the filly reported home in front by almost a length. She paid $111.00 to win but she entered the Keeneland record book via the superfecta pool.

Fancy Martini keyed a 10-cent superfecta payoff of $72,863.72, shattering a record that was established in 2014. Only one ticket held the winning combination, which was purchased through NYRA Bets. Graham’s mount led home a brigade of longshots priced at 37-1, 48-1 and 4-1.

The prices were a bit more tepid on the two Graham wins that followed. He ran down the heavy favorite to get the second choice, Midnight Rider Racing Stable’s Sunny One, up by a head in Friday’s eighth race, a third-level allowance route on the turf. The 4-year-old filly, which Conor Murphy haltered for a paltry $7,500 at Turfway Park in March 2021, has now earned over $200,000 for her current connections. She paid $10.68 to win here.

Graham got a fourth win in Saturday’s seventh race, an allowance sprint on the sod, aboard Touch of Class for trainer Bernie Flint. This filly rallied to be best by one and one-half lengths. She paid $29.46 to win, a healthy return by most standards but a bit chintzy when stacked up against her jockey’s body of work for the week. At the conclusion of Sunday’s card, he shared sixth place in the rider’s standings with four rivals.

Twelve furlongs is squarely in Temple City Terror’s wheelhouse and the 6-year-old mare made that clear with an emphatic three-length victory in the Grade 3 Dowager Stakes at Keeneland on Sunday. The Brendan Walsh trainee had two wins from her prior 12 starts and both were at a mile and one-half. The mare and jockey Tyler Gaffalione were well back early in the Dowager, crept up on the leaders around the far turn the final time and easily cleared them in the stretch, going on to win by three lengths. She paid $7.94 to win. The mare is owned by Pocket Aces Racing and Somewhere Stable Kentucky.

“Unbelievable,” Walsh said about how the mare has developed over the years. “If you had told me three years ago that she was going to do something like this, I’d have said you were crazy. Once she got her maiden – I think she took eight or nine starts to break her maiden – she gradually, gradually improved. She’s as honest as the day is long and she leaves it all out there.”

SNICKET LOVES THE BIG A

Snicket, a David Duggan trainee, also has a distance preference (six furlongs), but more than that, she has a soft spot for Aqueduct’s main track. The 5-year-old New York-bred mare, owned by Highland Yard LLC, brought a 3-for-25 lifetime mark into Thursday’s seventh race, an open first-level allowance sprint, at the Big A. However, all three of those victories came at the South Ozone Park oval.

Snicket was uncharacteristically quick out of the gate in this race and opened up by as much as three lengths early under Trevor McCarthy. The margin of victory was only one-half length but there was little doubt that she’d reach the wire first. She paid $10.20 to win as the fourth choice in a six-horse field.

Last Saturday’s first race at Golden Gate Fields was a Brendan Galvin affair. He sent out the first two finishers in this maiden claiming mile on the lawn, both of which are 3-year-old fillies owned by Louis and Raelene Neve. She’s a Bit Sassy plunged into the selling ranks for the first time and proved a bit better than her stablemate, On Vacation. She’s a Bit Sassy paid $6.20 to win and the Galvin exacta came back $13.40.