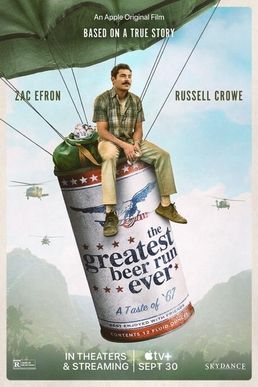 It's been a long pour. First the book then the planned movie. Covid was no help. But, at last, the screen version of "The Greatest Beer Run Ever" has made it to the big screen and is also streaming on Apple TV +.

The story is true and a deeply personal one for John "Chickie" Donohue.

Donohue, a legend in the world of those rock tunneling union members known as Sandhogs, self-published his book, “The Greatest Beer Run Ever," in 2017.

He went on the road to read and sign copies, often in union halls.

His story, and his determination to get it before as many pairs of eyes as possible, attracted one particular set of eyes, that of movie director Peter Farrelly.

And so, the movie with Zac Efron starring as Donohue, and additional starring roles from Russell Crowe and Bill Murray.

Flash back to 1967. The United States is deep into the Vietnam conflict, the result becoming increasingly uncertain.

John Donohue, who would later become leader of the Sandhogs union Local 147 and be known as “Chick” or "Chickie" to all who knew him, was 26-years-old that year, and he had served his country in the United States Marine Corps.

He had maintained his connection to the oceans by becoming a merchant seaman after his Marine Corps service.

He was ashore when the idea was proposed in an Inwood bar, Doc Fiddler’s. Lots of crazy ideas take form in bars. Most of them never get outside the door.

It was suggested that, given the rising clamor of anti-war protests, one of the group of buddies that night should travel to Vietnam, somehow infiltrate the war, and deliver messages of support from loved ones in the United States to Marine Corps pals “in country.”

That support could be backed up with beer.

Donohue volunteered for the mission and what happened next was that he sailed to Vietnam on a cargo ship, the “Drake victory,” carrying a backpack full of beer.

Unbeknownst to Chick, indeed unbeknownst to top American military brass, the Viet Cong and North Vietnamese were planning a big offensive. It would go down in history as the Tet Offensive.

Then came Tet and Donohue found himself stranded in Saigon as the bullets flew and as his ship had left port without him.

His mission would embed itself in local lore and would be recounted in “The Greatest Beer Run Ever,” which was penned by Donohue and Daily News writer Joanna Molloy.

Now the story is embedded on the screen, big and small.