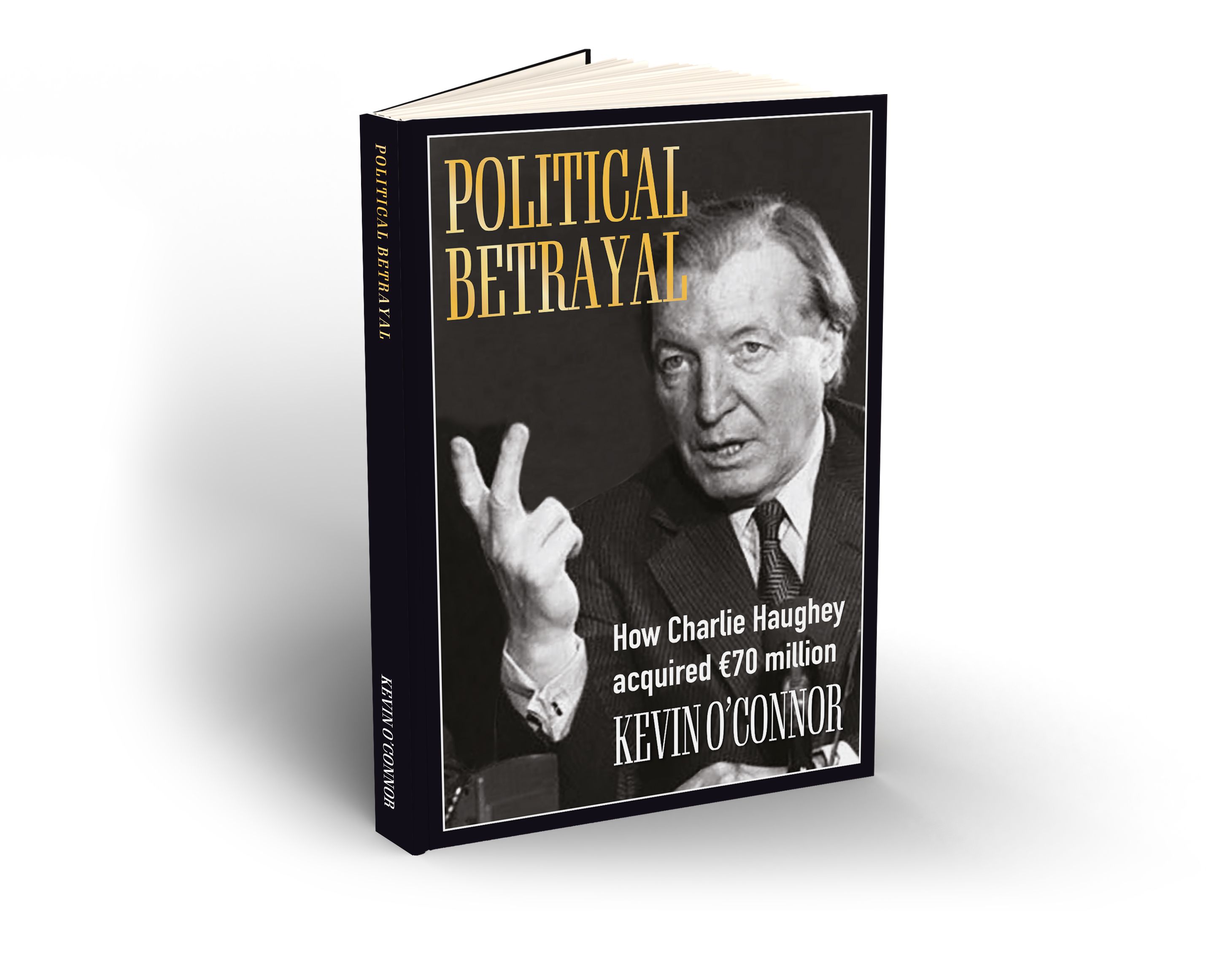 My new, explosive, book on former taoiseach Charles Haughey, the most controversial and fascinating Irish politician of the last century, claims he was in direct contact with leaders of the Provisional IRA during the 1970s.

He was effectively an IRA informer during that time. My book is entitled “Political Betrayal." I know Irish politics well. Over the course of a long career I was Sunday Independent News Editor and Parliamentary Correspondent.

I worked in Leinster House for almost 30 years. My new book also contains evidence that as Minister for Finance in 1970 Haughey tapped the phone of then taoiseach, Jack Lynch, this as the arms crisis was unfolding in May of that year.

At that time, Haughey and Neil Blaney, two ministers in the Jack Lynch government, were dismissed by the taoiseach for alleged illegal gun running. In a later trial they were found not guilty of illegally importing arms into the country.

I pull no punches on the 35-year career of Haughey, twelve of which were at the prime ministerial helm. I base the spying claims on a number of memoranda obtained from the Garda’s Special Branch Unit, who were tapping Haughey on a regular basis when he was out of power from 1970 to 1976.

The Special Branch later disclosed to the Jack Lynch government that Haughey had several meetings with leading members of the IRA, some at his mansion in Kinsealy in North Dublin.

The covert memo from the Special Branch to the Jack Lynch Fianna Fail government, seen by myself reads: “Mr. Charles Haughey is still in touch with the Provisional IRA through John Kelly and Joe Cahill. He told them he was not in a position to do anything for them at present but that he hoped to be back in Government in a few months time and would press for a stronger line on the north. He told them Special Branch Dublin Castle were still receiving information from inside the republican movement but not as much as heretofore. He promises to pass on anything he hears on that aspect but to keep his name out of it."

The Special Branch memos about Haughey’s contacts with senior Provos showed his devious nature and willingness to play patsy with terrorists for his own political aims.

Within months, Haughey returned to Fianna Fail when Lynch appointed him as health spokesman. And in the late 1970s, as Health Minister, he was back in contact with the Provo leadership, making representations for his new found friend, best-selling author Frederick Forsyth, who was then living in Wicklow and was fearful of being kidnapped.

According to the secret memos, the Provos promised Haughey that the "Day of the Jackal" author would not be touched.

That startling information to the Irish government came from the then American Ambassador, Margaret Heckler, by way of her friend, Brian Lenihan, the late Irish foreign minister. Over tea and cakes at the American Embassy, Heckler told Lenihan: “Are you aware that the British are tapping your Cabinet meetings”?

In the book, a meeting between Haughey and controversial TD, the late Liam Lawlor, is likened to a scene from the Sopranos.

When Lawlor suggested that he was thinking of joining the newly formed Des O'Malley-led Progressive Democrat party, Haughey pulled out a file on Lawlor and demonstrated what information he could use to destroy his political reputation.

The incident demonstrated that Haughey had a dossier on most of his parliamentary party and used it to maximize his power over them at vital times, particularly in government heaves against Haughey.

"Political Betrayal" explains what really happened in the still intriguing, fall-from-a-horse story. It was one of the most controversial events of a career littered with them. Had the truth been revealed, Haughey’s career could have been over on the day of the budget, Wednesday April 22nd, 1970… all this against a background of the dramatic arms crisis which had then gripped the country.

The man who saved his career was the new Minister for Justice, Des O'Malley, then 31-years-old who had ordered a garda investigation into the incident.

The book also touches on the episode that did most damage to Haughey when the Moriarty Tribunal found he had misappropriated €250,000 of the €336.000 raised for Brian Lenihan’s liver transplant operation at the Mayo Clinic in the U.S.

Only €88.000 was needed for the man Haughey described as his “closest political friend." That allowed Haughey to lodge the rest to his leader’s account, knowing it was unlikely to be discovered.

I previously authored the bestselling “Sweetie," which revealed the 27-year affair Haughey had with journalist Terry Keane at a cost to the Irish taxpayer of €26,000 a month in wining, dining, presents and holidays. Haughey also spent €16,000 a year on specially monogrammed shirts and suits from Charvet in Paris.

Haughey illegally pocketed more than €70 million from people in business during his 35 years in politics. He betrayed the public trust and the nation and in doing so reaped a huge dividend for himself. His partner, Terry Keane, betrayed Haughey by revealing on RTE’s “Late-Late” show her 27-year affair with the former taoiseach. She collected almost €300,000 from various newspapers for her trouble.

I do recognize Haughey’s superb achievements. These include setting up the Financial Services Centre in Dublin city center which now employs more than 44,000 people in highly paid jobs. It realizes €1 billion in corporate taxes each year, with a further €1 billion going to the exchequer in payroll taxes.

I also credit Haughey with the introduction of free travel for the elderly and I contend that Ireland has a world class equestrian industry after 40 years of Haughey’s stallion-fee exemption tax. Haughey also played a significant role in the peace process.

But in “Political Betrayal," corruption, drama, romance, scandal and betrayal are all documented and exposed as they played out in the culture of excess and intrigue operated by Haughey during his twelve years in Ireland's top political job.

Operating behind the scenes in the Dail for nearly thirty years as Parliamentary Correspondent for the Sunday Independent, Ireland’s largest newspaper, Limerick City-born Kevin O’Connor monitored for a long time the headline making career of Charles J. Haughey, one of the most astute and controversial politicians ever to work in Leinster House.

In 1992, when Albert Reynolds succeeded Haughey as Taoiseach, Connor presented a paper to him on the importance of the Irish Diaspora and how the government could tap into the forty-four million Irish in the U.S. – in particular the forty percent of American chief executives who are of Irish origin.

Consequently, Reynolds appointed an international marketing committee to act as a sounding board for ideas and help to market Ireland internationally. Out of that committee came the “Gathering” concept in 2013 resulting in eight million people coming to Ireland from all over the world, contributing some €3.64 billion to the economy.

“Political Betrayal” is available in print and e-book versions on Amazon and Kindle.