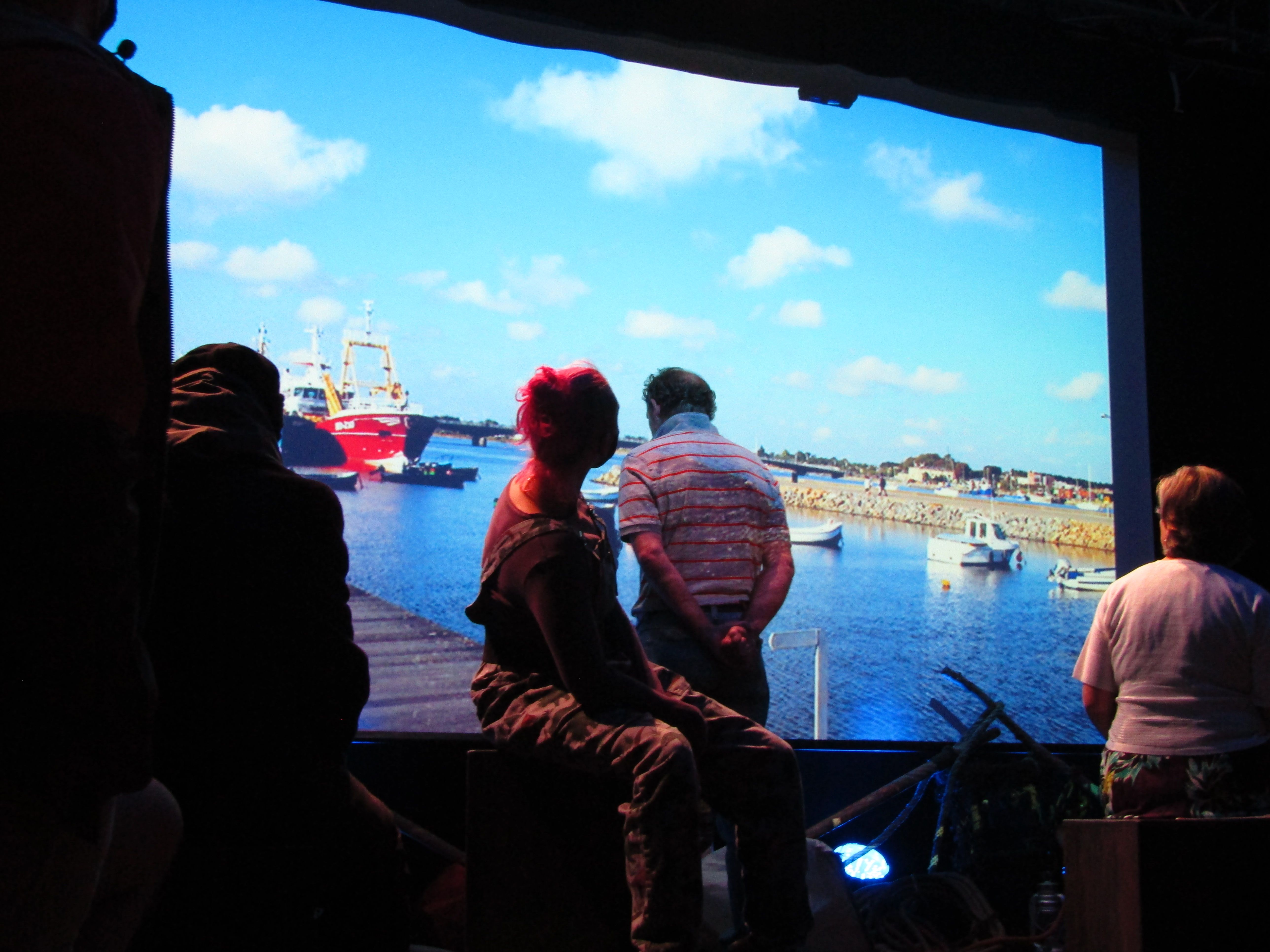 “One Voice Festival: Tales from the Quay" / Photo by Ann Marie Walsh.

The recordings of stories can be heard humming over the ocean this week, as two Irish theatre companies present their new plays from sea to shining sea. The Everyman (Cork) and Wexford Arts Centre, as part of the Origin Theatre Company’s 2022 1st Irish Festival, are each screening submissions online this year, via streaming platforms found on the Origin Theatre Company website.

These two productions both bring to the festival the harmonious theme of home from coast to coast (of Ireland that is), the reverberating message that every voice matters, and how a city becomes the landscape of our lives.

From a digital auditorium in Cork, the Everyman presents festival goers with “City,” a one-person monologue written and performed by John McCarthy, and directed by Niall Cleary, which runs online through Jan. 31. Written for its namesake, “City” entails and entreats audiences with an elaboration of McCarthy’s musings on what—and who—is a city, throughout time and place.

Following the trend of recent theatre to go ever-reaching toward  minimalist, postmodern and tech-reliant tropes, McCarthy’s latest invention has taken Irish theatre perhaps one step closer to the next vanguard. As the vaguely-vain, omniscient City, McCarthy sublimely explores the experience of being human in non-human terms, a Brent Spiner-like portrayal of inanimate sentience, as his character computes the “data” with which people and city define one another.

In the role of City, McCarthy is definitively uncanny. His performance, is at once alluring and unnerving, somehow embodies a character viewing life as an observer, oftentimes sounding more like a phonetician or musical archivist than dramatist, and above all like some unearthly machine; something conscious but not human. If for nothing else, one should see “City” merely to witness McCarthy achieving this unusual act.  Through a sonorous passage of sound, in which McCarthy delivers a nearly all-oral narration, he is a savant of vocalization, creating gesture, imagery and memory entirely out of his own sounds, which, while occasionally overly-embellished, are resoundingly impressive.

In words both poetic and dialectic, McCarthy’s writing baffles the synapses with an experimentation of prose which both astonish the mind of the listener, as well as at times disorient it. To that effect, the ideas McCarthy’s intends to convey sometimes get lost in a sea of Joycean thought, and for the ordinary audience member it’s from this habit, coupled with the already emotionally-unidentifiable enigma of his performance, that things can get foggy for those trying to keep up with him. And with a narration that inexplicably splices back and forth between centuries, characters—and even the play and reality itself—this can be fatiguing for those accustomed to a conventional theatrical storyline.

Analytically burdensome or not, McCarthy’s “City” immerses us in the places and stories of those that make Cork alive; from the legendary Ferdia to a couple bickering about pasta, from sound waves and closed rooms to everything in between. Like its eponymous character, who claims to have all voices within, yet with one true voice of its own, “City” has managed to be another early success of post-pandemic, digitally-centered theatre: alone in isolation, yet feeling the connectedness with all. Whether fellow theatre-goers feel connected to “City” or prefer to log out, we will remain all ears.

The Wexford Arts Centre, also bridging together people and place, have presented their production of “One Voice Festival: Tales from the Quay,” directed by Paul Walsh and running online through Jan. 31. This production, a showcase of eight monologues written and performed by eight playwrights and actors of  professional and amateur backgrounds, focuses on the voices of those with a connection to the Wexford quay, each with their particular association and affinity for the seaside landmark.

In a series of separate chapters, the performers recite their story and identity in relation to Wexford, some nostalgic, others traumatic, as they define their ties to home. Each monologue ebbs as unpredictably and tempestuously from the other as the Irish Sea that one overlooks from the Wexford quay.

Most of the monologues follow a generic formula, in that there is a “surprise” plot twist at the very end, and each is altogether unsurprising. Yet aside from this unremarkable spot in the show, the monologues give the audience some considerable vignettes of Wexford lives.

Some stylistic monologues, such as Paul Walsh’s “A Method in Menapia,” a blithe Protestant Ascendancy’s guide to organized crime, pithily performed by Imelda McDonagh, was so peculiar that it seemed bizarre enough to be real; while Michelle Dooley Mahon’s “Boots,” performed by John Crosbie, about memories of a past lover, was so gut-wrenchingly raw one wasn’t sure a townie hadn’t walked on stage with a beer and started spilling his life’s lament.

Danielle Fortune gave a shining performance in Jack Matthews’s raunchy “Revenge,” as did Stephen Byrne in Heather Hadrill’s well-written “Coming Home,” a relatable monologue from a man contemplating moving home to Wexford after a life around the world. https://www.origintheatre.org

The most favored of all were the simplest stories, and among those monologues, the voices of Phil Lyons in “Wexford Town (Hello in There)" and Andy Doyle in “A Trip of a Lifetime” bookend the tales from Wexford quay wonderfully.

Voices of life are being heard loud and clear in Irish theatre, from Wexford to Cork.