Home Oatmeal: For Breakfast and Beyond 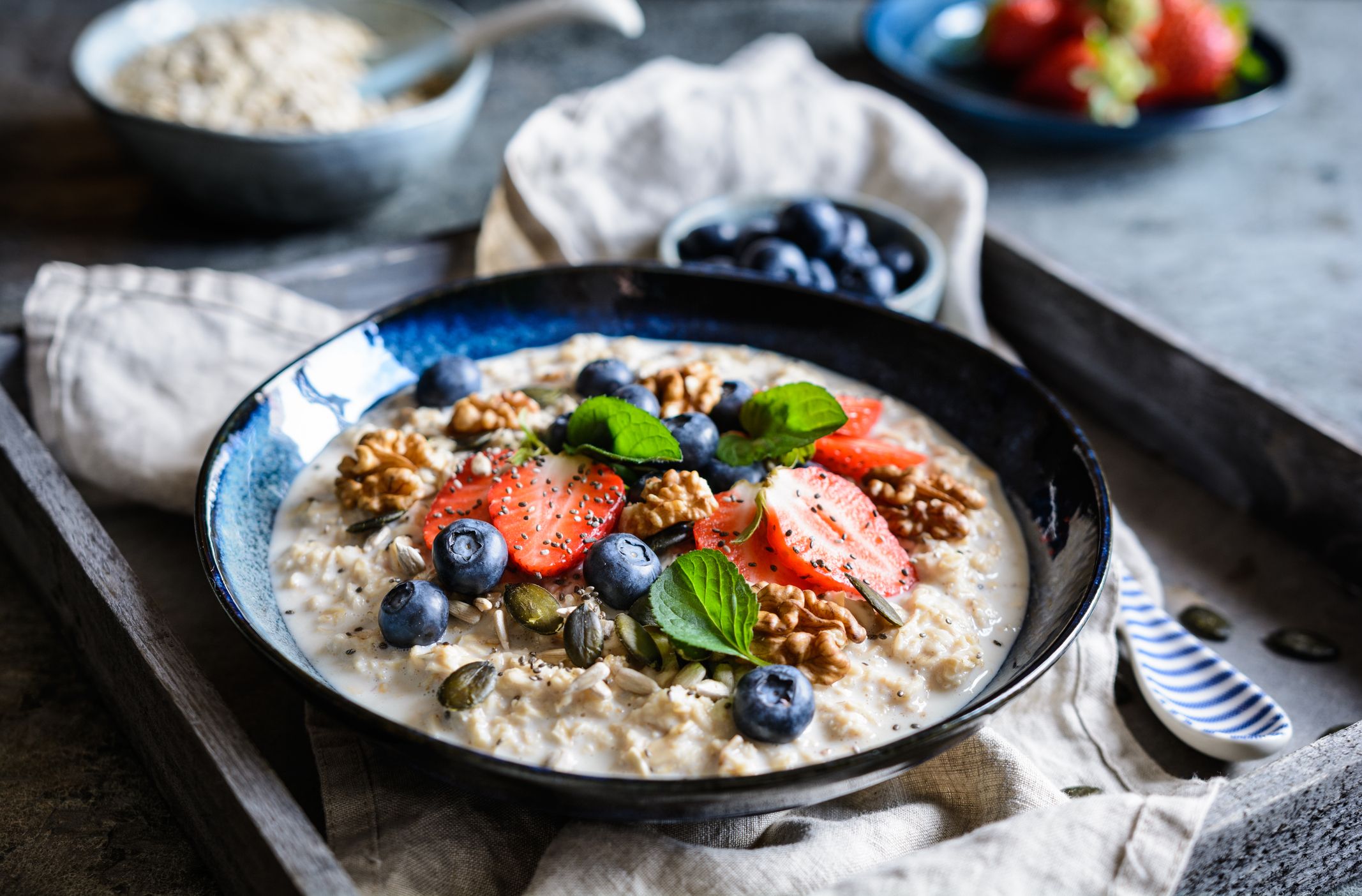 Did you know that January is “National Oatmeal Month”? This healthy grain was grown in ancient China as long ago as 7000 B.C. and the Greeks are believed to have been the first to use the grain for porridge. It was the Romans, though, who not only introduced oats to other countries in Western Europe, but also gave them and other cultivated crops the name “cereal,” after Ceres, the Roman goddess of agriculture. The cultivation of oats is particularly suited to Ireland’s climatic conditions (fertile soil, temperate climate and abundant rainfall), and oatmeal was a staple of the Irish from prehistoric times until the seventeenth century. It’s no wonder, then, that it enhances meals from morning porridge to lunchtime salads and dinnertime desserts. To celebrate the wholesome humble grain, I’ll be sharing recipes throughout January that showcase its versatility and deliciousness.

Rolled oats are a key ingredient in granola, a crunchy breakfast food made with dried fruits and nuts. It’s delicious sprinkled over fresh fruit and topped with natural yogurt and makes a great addition to a brunch buffet.

2 cups Irish oatmeal, such as Flahavan’s or McCann’s brand

1. Preheat oven to 300°F. Place oats on a large rimmed baking sheet. Bake, stirring once or twice, for 20 to 25 minutes, or until oats are lightly toasted.

5. Bake, stirring once or twice, for 15 to 20 minutes or until lightly browned.

6. Remove from oven; let cool completely. Stir in raisins and cranberries. Use immediately or store in an airtight tin for up to 1 month.

More than 100 years ago, Dr. Bircher-Benner, a pioneer nutritionist, invented an "apple diet dish" that has become one of Switzerland’s best-loved breakfast foods. His recipe, which combined oatmeal, condensed milk, hazelnuts, and grated apples, quickly became popular with health-conscious adults, and over the years, other fruits, nuts, seeds, honey, and yogurt have been added. You’ll find this creamy dish on many Irish breakfast buffets and will want to mix up a batch to have for breakfast at home.

1/4 cup each lemon juice and water

1/2 cup light cream or half and half

3/4 cup honey, plus additional for serving

2. In another medium bowl, combine oatmeal, cream or half and half, yogurt, and honey. Drain  apple; stir into oatmeal mixture. Cover and refrigerate for 1 hour or overnight.

3. To serve, spoon into bowls and drizzle with additional honey and top with and fresh fruit and nuts, if desired.

I dug into the archives for this recipe, one that first appeared in my Irish Heritage Cookbook, published by Chronicle Books in 1999. The recipe originated with Chicago-based chef Michael Foley who created it for a special event hosted by the Irish Food Board. After retesting, I’ve updated it slightly. A few tips: have all ingredients at room temperature and measured out in advance; add some chopped chives for a little kick; bake in ramekins and reheat for another meal.

Breadcrumbs, for dusting the ramekins

1. Preheat oven to 325°F. Butter six 7-ounce ramekins with 1 ounce of butter. Dust with breadcrumbs; tap out excess.
2. In a medium saucepan over medium heat, heat milk and remaining 1 ounce of butter until almost boiling. Stir in oatmeal. Cook, stirring constantly, for about 3 minutes, or until mixture thickens.
3. Remove pan from heat; beat in cheeses until smooth. Stir in bacon, egg yolks, parsley, mustard, salt, black pepper and cayenne pepper.
4. In a stand mixer fitted with a whisk attachment (or with a hand mixer), beat egg whites until stiff peaks form. Gently fold one quarter of mixture into cheese mixture. Continue to add whites by thirds, until incorporated. Spoon into prepared ramekins.
5. Bake, undisturbed, for about 18 minutes, or until tops are lightly browned and soufflés are risen and set. Run a knife around edges and invert onto plates; return to upright. Serve immediately or cover and refrigerate. (To reheat, microwave for 10 to 20 seconds).

You can have these muffins on the table in less than 30 minutes if you mix the dry ingredients the night before and stir in the egg mixture in the morning.

Whisk together egg, milk and butter. Stir into dry ingredients and then stir in cranberries and orange zest.

3. Spoon batter in prepared pan and bake for 25 minutes, or until tops are lightly browned and a skewer inserted into center comes out clean.

Margaret Johnson is the author of 12 cookbooks, including Festive Flavors of Ireland. For further details on her work, or to order a signed cookbook, visit  irishcook.com.