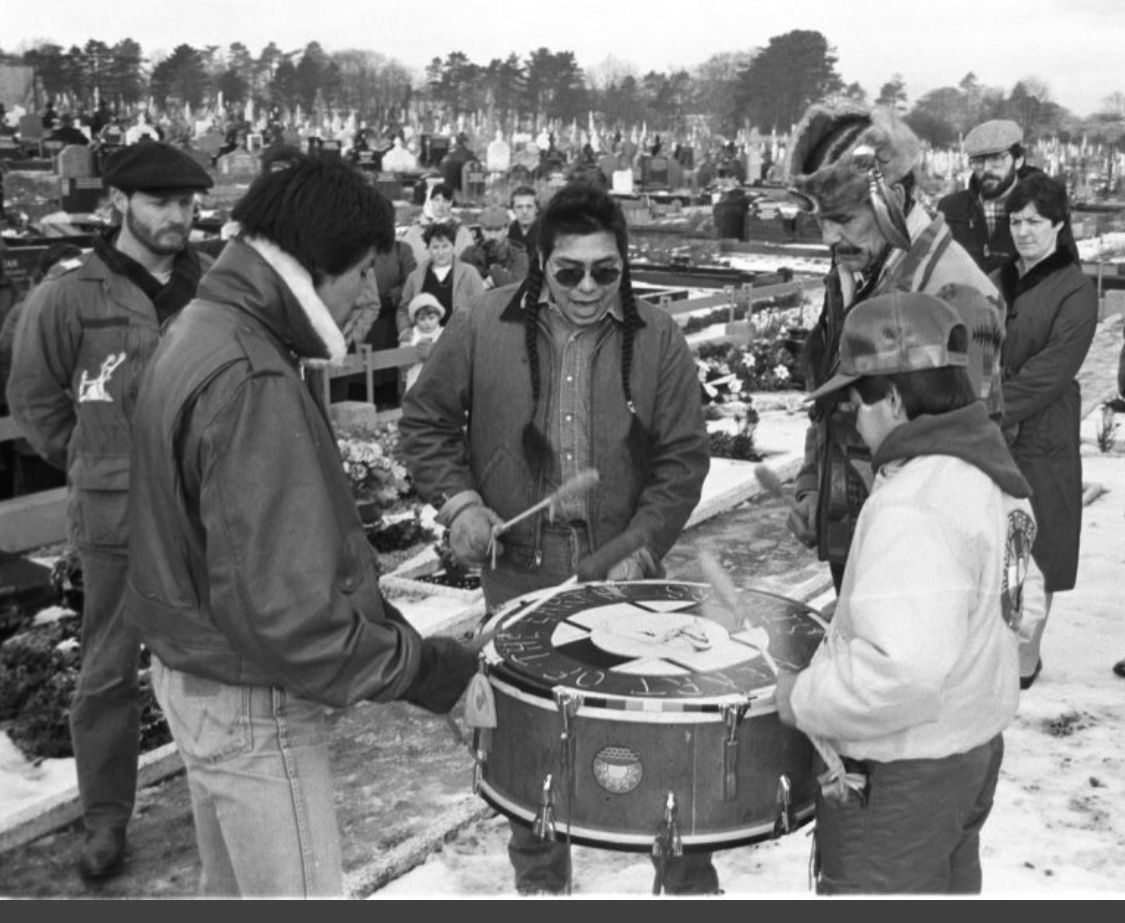 Native American drums piercing the silence at Milltown Cemetery in 1985.

The drum beat and the chant echoed across the emptiness of Milltown Cemetery. Despite our heavy coats the January cold penetrated through to the bone.

Present were Margaret and Alfie Doherty, the parents of hunger striker Kieran Doherty; Jim Daly, whose wife Miriam, a member of the National Smash H-Block Armagh Committee who was assassinated by the UDA in 1981, and myself, Alex Maskey and others were at the Belfast Republican plot. So was Maura McDonnell, sister of H-Block hunger striker Joe McDonnell.

It was 1985 and we were accompanying a delegation of Native American Indians from the American Indian Movement (AIM). They were in Ireland to "see the situation – political and cultural …" The delegation laid a wreath at the graves of our Patriot Dead and chanted the national anthem of AIM to the beat of their drum.

Their purpose in traveling to Ireland was to forge solidarity links and to make the connection between two struggles for freedom. Among the AIM delegation was Clyde Bellecourt (Thunder before the Storm – Nee-gon-we-way-we-dun). He was a co-founder of AIM in 1968. It was established to highlight police violence and discrimination in housing, education and employment against Native Americans. "Like the Irish people we have had to fight against cultural genocide," said Clyde.

The day after our visit to Milltown the delegation traveled to Derry where they took part in the Bloody Sunday commemoration and laid a wreath at the monument for the 14 people killed by the British Army Parachute Regiment. The delegation held a spiritual service at the Bloody Sunday monument where they sang and played their drum in remembrance of the civil rights dead. Clyde explained that they had come "to pay respects to people who had given their lives for peace, equality and liberty in their homeland, the aspirations for which American Indians were struggling in their homeland."

Clyde and his friends were in Ireland representing the Dakota, Lakota and Anishinaab nations.

In his memoir Clyde wrote of the experience of his people: "Indian people had no legal rights centers, job training centers, community clinics, Native American studies programs or Indian child welfare statutes …  We were prohibited from practicing our spirituality. It was illegal to be in our country. The Movement changed all that."

I was reminded of all this when the news broke that Clyde had died at his home in Minneapolis. He was 85. In a column several weeks ago I appealed to the U.S. President to release Leonard Peltier on compassionate grounds. Leonard was a friend and a contemporary of Clyde. They were both involved in the occupation of Wounded Knee, to highlight the plight of the native people. Two FBI officers were killed during that incident and Leonard was convicted in 1977 of their murder, a charge he has consistently denied. He has been in prison for almost 45 years.

In 2006 Leonard spoke of the similarity and empathy between the Irish and Indian struggles. In words that Clyde would have endorsed he said: "When Bobby Sands died on May 5, 1981, millions of people from around the world joined their voices together to condemn the British government that allowed him to perish. I joined my voice to theirs. I fasted in solidarity with the Hunger Strikers for forty days during that dreadful year. Fasting is something that I have done many times, when I was a free man, while participating in our sacred Sun Dance. The sufferings of our relations in Ireland are pains that we as Indian people know all too well. Our suffering, our fasting and our struggling links us together with a common bond. That is why I say to you, there in Ireland, you are my relatives. As your relative, let me join my thoughts, tears, and prayers with yours as you commemorate your fallen, especially those who died on Hunger Strike in 1981. My family and your families, my pain and your pains, my peoples struggle and the struggles of your people are all connected. We truly are all related."

Bobby Sands knew this. In his amazing poem The Rhythm of Time he remembers "It died in blood on Buffalo Plains, And starved by moons of rain, Its heart was buried in Wounded Knee, But it will come to rise again."

Clyde Bellecourt also understood this affinity that grows between people who suffer oppression and struggle for justice and for their rights. He was a champion of his people. He had the courage and determination to take a stand against a system that was shaped to degrade and diminish their humanity. All of us who met Clyde were deeply impressed by his commitment to his activism.

In the 90s he helped organize marches against the use of Indian mascot names by U.S. sports teams. Native peoples and many others long regarded these names as racial slurs. Two years ago, against the backdrop of widespread protests and civil unrest over the killing by the police of African Americans, the Washington Redskins announced that the "Redskins" was to be dropped. Speaking at the time Clyde said: "Black lives matter and Indian lives matter." Sadly, he won’t be here for the culmination of one part of his story when the Washington team announces their new brand name in a few days.

To Clyde’s wife Peggy and his daughters Susan and Tanya, his sons Little Crow and Wolf, and his many grandchildren and great grandchildren, I extend the condolences of Irish republicans.

Last Saturday hundreds of people took part in a Save Moore Street rally in Dublin. The rally was called at short notice by the Moore Street Preservation Trust in response to the decision by Dublin City planners to green light the redevelopment plans by the UK based developer Hammerson for Moore Street and its environs.

For those who don’t know the Moore Street 1916 battlefield site it stretches from Tom Clarke’s shop on Parnell Street to the GPO, to Moore Lane and Moore Street where the GPO Garrison retreated; to the spot where "The O'Rahilly" died, and to 16 Moore Street where five of the seven signatories of the Proclamation - Seán MacDiarmada, Pádraig Pearse, Joseph Plunkett, James Connolly and Tom Clarke - held their final meeting. It is described by the National Museum of Ireland as: "The most important historic site in modern Irish history."

Successive Irish governments have failed to protect and preserve Moore Street and its 1916 history. On the contrary, Micheál Martin and others have publicly endorsed the developer’s proposals which would see most of the 1916 historical quarter destroyed by the developer’s bulldozers.

James Connolly Heron, the great grandson of James Connolly, on behalf of The Moore Street Preservation Trust and the Relatives of the Signatories to the Proclamation, described the decision by the planners as “another significant blow to the unique heritage and irreplaceable architecture of Dublin.”

To help fund its campaign the Moore Street Preservation Trust has launched an Easter Raffle to raise funds. The prize is an original Mauser Rifle smuggled into Ireland in the Howth gun-running operation in 1914. The Mauser Rifle has been kindly donated by Pat O’Hagan, an eminent collector of historical artifacts from the period 1901-1923.

The artifact is an antique firearm manufactured before 1898. It is for display and ornamental purposes only. It is a condition of the sale that the winner of the raffle agrees that this historical artifact stays within the island of Ireland and that it will not be sold, loaned or rented to any person, organization or private enterprise not resident within the island of Ireland.

A raffle ticket can be purchased at: http://arasuichonghaile.com/moorestreet or can be accessed through the Moore Street Preservation Trust website at: https://www.facebook.com/MooreStreetTrust/

So, support the Save the Moore Street campaign. Help to preserve this iconic and hugely important 1916 historical site. Buy a raffle ticket and you could soon own an original 1914 Howth Mauser Rifle.