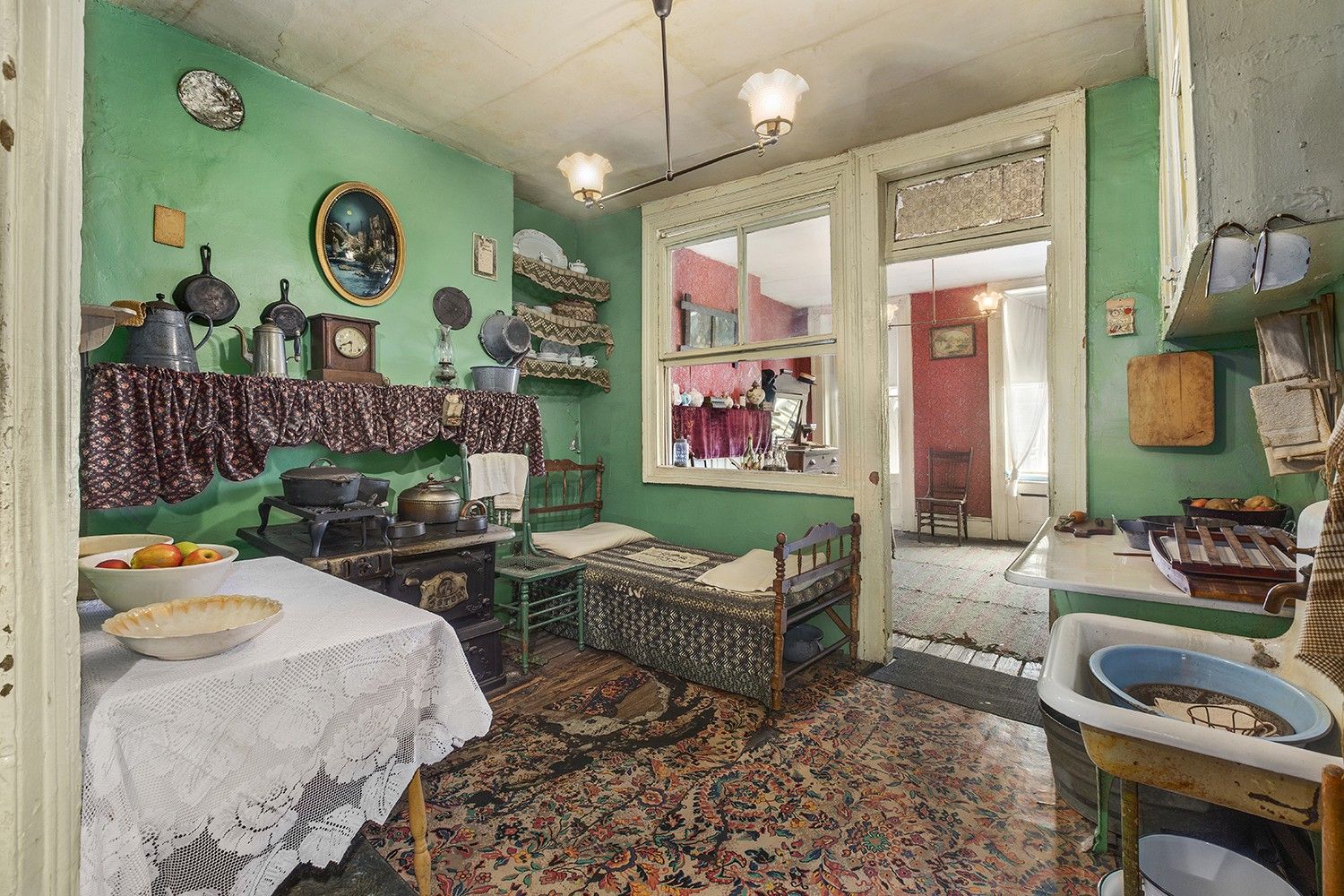 As reported in last week’s issue, Kia Corthron will tonight discuss her new novel, “Moon and the Mars,” at the Irish Arts Center. The book is described as “examining racism, family, and identity through the eyes of Theo, a young girl growing up between the homes of her Irish and Black grandparents in the Five Points neighborhood of mid-19th century New York City.”

The event will be produced in association with the Tenement Museum. This is not, I’m pretty sure, the first collaboration between those two dynamic organizations. And there are certainly plenty of Irish artists and writers who’ve appeared at both venues.

In the case of Mick Moloney back in 2010, the demand was so great beforehand that the Tenement Museum rented a nearby hall, quite a big one if memory serves, for his talk on Irish influences on Manhattan’s musical traditions. It was standing room only.

Two years before that, the museum opened its Moore apartment based around the story of an Irish family that moved into the building in 1869.

My own association with it goes back further still. In 2000, I wrote a feature for this newspaper about the museum’s search for an Irish family whose story could be told at 97 Orchard St. And from early 2001 through the middle of 2004 I worked there as a paid part-time educator. For the first couple of years I was at the museum several days a week. To put that in some perspective, a regular shift was four back-to-back building tours over the course of six hours.

I quit when I got full-time editorial work in 2004 and I never got to do the “Irish Outsiders” building tour about Joseph Moore and his family, although for a time I led walking tours, which took in some Irish-American history with mentions of iconic neighborhood churches and so on. I maintained contact in other ways for a while, and was asked once by the bookstore’s manager to introduce Pete Hamill at a reading (the introduction was supposed to be a hard-sell pitch to get folks to buy the book).

I did subsequently disagree with the museum’s policy in one area (as did Hamill, I heard through the grapevine), but that aside, I have positive feelings towards the place and anybody who is connected with it. It was an incredible experience to work at that quintessentially American of institutions — often on some days as the only person who was an actual immigrant, and the only one with a foreign accent.

So it was with considerable dismay that I saw the Tenement Museum at the center of what can only be described as a manufactured controversy in recent weeks. Much of it was predicated on a basic inaccuracy in reporting, a fundamental error about what the museum’s mission has always been.

But first of all, an accurate story — back in June, the New York Times reported that some years ago a museum researcher had found and was intrigued by another Joseph Moore, a Black man who was born in New Jersey and later lived in lower Manhattan; and now, although he had not lived at 97 Orchard St., the museum was planning to build a Joseph and Rachel Moore apartment, on the fifth floor, which would open in the fall of 2022. The Times said that the “existing Moore tour, called ‘Irish Outsiders,’ is being replaced with a hybrid tour discussing both Josephs, and offering a preview of the museum’s detective work.”

Knowing what I do about the museum, its history and how it operates, I thought that a reasonable idea, and indeed potentially a very good one.

There wasn’t a peep from anybody about this for half a year. Then came in late November an incendiary article on the conservative Spectator World website, by one Peter Van Buren, headlined “Woke Claims a Museum,” which was then reported by other, better known right-leaning outlets.

Essentially, the charge was that in some sort of woke-induced delirium, the Tenement Museum had radically changed its founding policy on a couple of fronts to “shoehorn” the American Black experience into a museum that always told the story of European immigrants.

The Daily Mail, calling it a “woke tale” said, “The Tenement Museum is replacing its story of an Irish family who lived in Manhattan's Lower East Side building with that of a black man who did not.”

Citing “multiple news sources” (all, it seems, traceable to and inspired by Van Buren’s piece), the Ancient Order of Hibernians inserted itself in this matter, repeating the main inaccuracy (saying the museum “was established to tell the history of immigration”). Irish-American media followed it down the same path, even repeating in some instances ludicrous points from the original Van Buren article that the AOH had prudently avoided.

The media coverage seemed somewhat off base in a number of respects — as well as unfortunate and disappointing — as I remembered that the museum’s basic mission was “to promote tolerance” and, of course, to that end, tell the stories of those who lived in the tenements, for many of whom the neighborhood was famously a gateway to America. But it was never narrowly defined as a purely “immigrant” museum, even if that was a great media hook. In any case, a presumed majority of the 7,000 people who lived at 97 Orchard from 1864 through to 1935, when it was boarded up, were New York-born.

A few days ago, I found a set of guidelines to educators from my time there, which clearly stated the museum’s mission was “to promote tolerance and historical perspective through the presentation and interpretation of the variety of immigrant and migrant experiences” to the Lower East Side; my 2000 article, which I've tracked down, cited that same mission statement.

So, there you have it: “migrants,” who can be Blacks from the South, for instance, and Puerto Ricans. In recent years, the museum has expanded to a new building, 103 Orchard, where it focuses on a Chinese family and a Puerto Rican family, and it's begun a walking tour that tells aspects of the African-American story on the Lower East Side.

Indeed, the Tenement Museum would have happily settled for an Irish family in which all of its members resident at No. 97 were New York-born, thus neither immigrants nor migrants; although, it would’ve been preferable for the story-telling in such a case if the grandparents, whether deceased or living elsewhere, had come over on immigrant ships. The problem for several years, though, was finding an Irish family of any type who stayed long enough to record a baptism at a local church or to be seen in some other such record.

So, let’s look at the issue of residency at 97 Orchard St., which is the other point that Van Buren has gotten people worked up about -- and robotically repeating arguments as to why a Black family should not be included at what is a National Historic Site.

He says that the Joseph and Rachel Moore apartment being built is “ahistorical.” No, it certainly is not, as the museum is not claiming that the family lived in the building. If a respected museum dedicated primarily to the subject of Napoleon branched out with a room or two on other aspects of French military history could anybody seriously have a problem with that? Well, the Tenement Museum is doing something similar.

Although no evidence has been found of any, we can’t say definitively that Black families didn’t live at No. 97 and so even a fictionalized recreation wouldn’t necessarily be described as ahistorical.  There is a precedent: the best-selling Dublin-born author Joseph O’Connor wrote the fictionalized “What Might Have Been: An Irish Family at 97 Orchard Street,” which was published by the museum about the same time the Moore apartment was unveiled.

That “actual” families lived at 97 is another great hook, but it has to be remembered that the stories, while based on fact, are highly speculative. This is why this type of the museum uses the word "interpretative," which together with "speculative" is not far off fictional in essence.

Yes, they were real people, but they are stand-ins for the millions of "urban pioneers" the Tenement Museum celebrates. Abraham Lincoln is an "historic" figure; and we know a great deal about him. We know very little about Nathalie Gumpertz, other than the fact that her husband disappeared and that she eventually had him declared dead; that she had three daughters who lived and a son who died very young. Nathalie is not historic, even if she once lived in a building that has been declared as such; she is "historical" -- she lived, she is of history, like all of our ancestors. Nathalie has one thing Lincoln doesn't have: direct descendants, and as part of the tour, we would show the picture of several of them, including a father and husband from New Jersey who was killed in the terrorist attack of 9/11.

The apartment stories have great power when you weave them around a few known facts; synapses in adult brains are fired, young faces light up.

Van Buren said that the museum had “forensically” recreated the lives of people in the “actual apartments” in which they lived. The first is not possible, and the second not true in most cases. “Painstaking” might be a better word to describe the approach of researchers, whose rigor has brought a certain authenticity to what visitors see.

But, in most No. 97 apartments, this is not our grandmother’s kitchen that we can remake with the help of memory and photos from our family’s past.

As someone who was through it over 1,000 times all those years ago, I’m somewhat amused at the fetishization of a building by people who if they’d be there more than once I’d be surprised – a fetishization now used in the cause of excluding a person who didn’t live there in the 19th century.

If the Daily News published a photo taken tomorrow, Jan. 27, 2022, of people at or near the clock in Grand Central Terminal, would someone looking at it in 100 years’ time be only curious about those in the picture? What if we knew that there was a guy looking up at the timetable out of the frame, wondering when his train to Scarsdale was due to depart?

The Tenement Museum is in the business of serving up entertainment to mostly middle-class visitors, and if its managers believe that telling the story of the Dublin-born Joseph Moore alongside that of the Black Joseph Moore works, then they should go for it. It shouldn’t matter so much that one lived for a time at 97 Orchard and the other lived elsewhere. In 2122, Scarsdale man might be a lot more fun to investigate than some who got their mugs in the shot.