Home Homepage O'SHEA: What We Can Learn From Ike 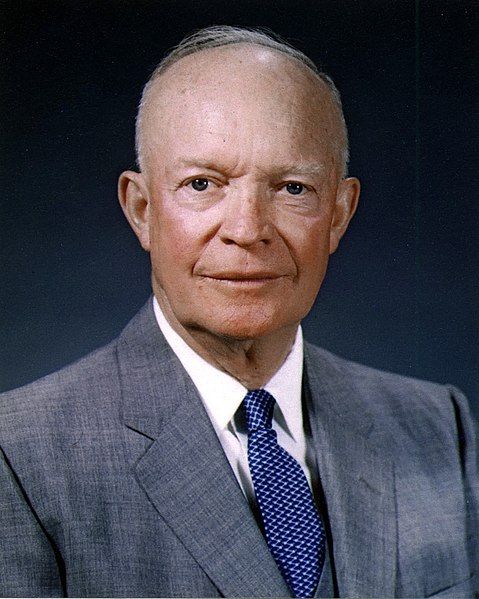 O'SHEA: What We Can Learn From Ike

Dwight Eisenhower, better known simply as Ike, was elected twice to the presidency of the United States, in 1952 and 1956.

He was a popular Republican leader with approval ratings that, according to Gallup, at times exceeded 75%. No wonder, considering that he ended the Korean War, balanced the national budget and presided over eight years of peace and prosperity.

He called his approach “the middle way,” indicating a strong desire for bipartisanship, but he also asserted clear presidential leadership at crucial times. For instance, he sent the 101st Airborne Division to Little Rock, Arkansas to escort Black students into desegregated classrooms, past a defiant governor and an angry white mob.

He also steered through Congress a Civil Rights Act in 1957, admittedly watered-down to accommodate southern sensibilities. He appointed Earl Warren, a fellow-Republican, to the Supreme Court, a decision that had very positive consequences for people arguing for progressive changes in America.

When Eisenhower faced Adlai Stevenson, the Democratic nominee, in the presidential race in 1956, his liberal agenda would yet surprise many readers, especially considering the antics of the Republican leadership in recent times. In that year, the GOP promised federal assistance for low-income communities and asylum for thousands of refugees and displaced persons.

The long-awaited $150 million memorial to Dwight Eisenhower will be dedicated on Thursday, paying tribute to the general who led the Allies to victory in Europe during World War II and the president who sought peace after it was over https://t.co/IXZPx3Pl5W

In addition, the party advocated for extending minimum wage protection and proffered support for workers looking for union recognition. And Ike assured the country that he favored equal pay for equal work for women. Keep in mind that all of those admirable proposals appeared in the Republican Party manifesto sixty years ago.

As a general, Eisenhower led the Allies to victory in World War II and worked closely with Secretary of State George Marshall in developing policies that were geared to the economic rejuvenation of Europe in the years after the German surrender. He realized the importance of a strong military policy to prevent Russia and its allies in the east from expanding westward. The NATO alliance was formed for that purpose.

It was, and still is, led by the United States, and it has been successful because the Moscow leadership never dared to invade any of the Alliance signatories, currently numbering twenty-four. Putin would never have pounced on Ukraine if that country was a member of NATO. However, in his departure speech to the American people in January 1961, before John Kennedy took over in the White House, President Eisenhower focused on the dangerous level of power garnered by what he called the military-industrial complex.

He saw the political clout of the war industry, especially at a time when fear of communism dominated the culture. Political hawks from both parties advocated for big increases in every arms budget. Leaders urging curbs on the exploding demands by the Department of Defense were dubbed communist sympathizers.

In his famous January speech, Ike advised the American people to look to diplomacy rather than superior weaponry in promoting American interests abroad. Since then, the disastrous American policies that led to Vietnam, Iraq and Afghanistan, surely confirm his perspective and fears. The military-industrial complex remains stronger than ever. America spends more in defense than the next five most powerful countries in the world.

We have enough weapons to destroy the world at least three times, but, despite our vastly superior armaments, we withdrew from Afghanistan because we couldn't defeat a ragtag army called the Taliban. President Biden is proposing a military budget of 725 billion next year, up from 715 last year, but less than the projected increase in the inflation rate. Already, Republicans are protesting this cutback and demanding that the allotment for the Department of Defense be raised.

No doubting, once again, President Eisenhower’s prescience about the insatiable demands of the military-industrial complex. Under Ike’s economic leadership in the 1950s there were major developments in the interstate highway system. That federally-funded program partly accounted for the strong American economy during the that decade. The marginal tax rate then was 90%. That is the rate paid by citizens on amounts earned over $400,000 – a figure that would be around ten times that today. The current marginal rate has been reduced over the years to a mere 39%, a huge boost for the super-rich.

Conservatives use the same basic argument about giving tax breaks to the affluent which, allegedly, results in trickle-down windfalls for middle-income and poor people. In 2019, Treasury Secretary Steve Mnuchin explained that the tax breaks in the Trump budget would lead to such vibrant economic activity that the deficit would be reduced. In reality, it increased by close to 1.3 trillion dollars. The other assertion that present day Republicans make centers on the silly idea that millionaire and billionaire business people would invest less in the economy if they have to pay a little more in taxes.

The economic history of the Eisenhower years, when high taxes were combined with burgeoning businesses, belies this supposition. The bipartisan infrastructure bill making its way through Congress is facing a major obstacle because Democrats want to pay for it by raising the marginal tax rate on people earning more than $400,000 annually, but Republicans reject this idea out-of-hand, although not even Senator Sanders or AOC suggests raising it to Eisenhower levels.

Secondly, Senate Leaders, Democrats Schumer, has proposed appointing more IRS auditors to deal with the widespread tax evasion by rich people that is tolerated because of major cutbacks in personnel by the Internal Revenue Service during the Trump years. The IRS estimates that the uncollected money amounts to more than 500 billion annually.

When that idea was publicized, there was an outcry by the big donors to the Republican Party forcing even that proposal off the table. Eisenhower came from a modest background, and he depended on his salary as a public servant in the army and in politics to pay his bills.

After leaving the White House he accepted a position as president of Columbia University, which leads to my favorite story about him.

Mike Quill, the great trade union leader, came to his office one day, ready to negotiate better salaries and working conditions for the caretakers and other ancillary personnel working for the university. Eisenhower was preoccupied with the bidding wars between universities for professors deemed particularly attractive in elite academic circles, and he found the process really annoying and demeaning.

He discussed his frustration with Mike who listened sympathetically and even offered a little advice based on his own experiences in a few tight corners. After a half hour conversation, the former president called the financial controller and told him that Mr. Quill, a fine Irishman, was in his office and all his demands should be granted.

Mike, a devoted left-wing Democrat, told the story with great glee, saying that negotiating with the former Republican president was his easiest assignment ever. Gerry O'Shea blogs at  wemustbetalking.com