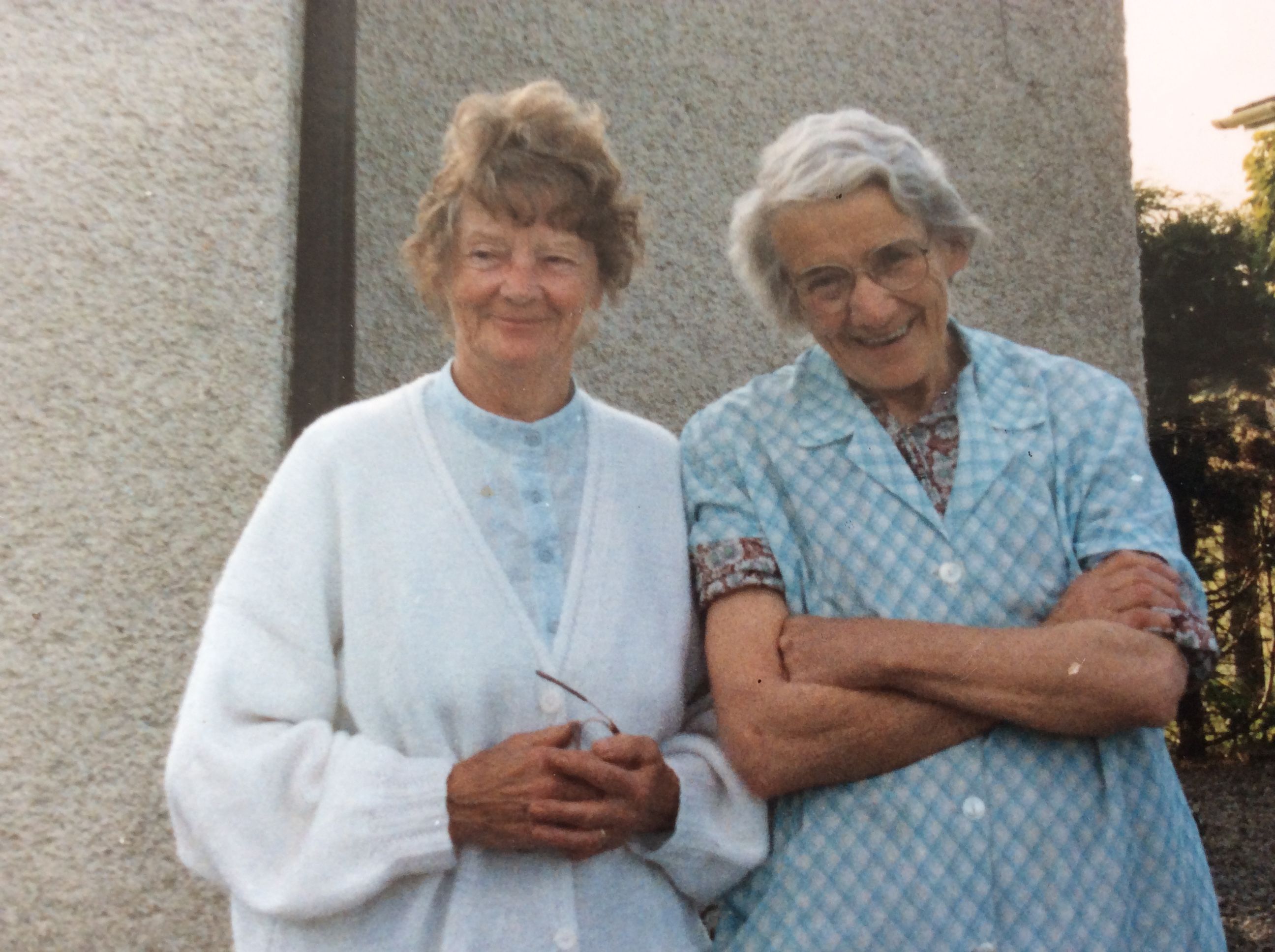 The author’s mother, right, with her old friend “Missus Loftus” who was visiting in 1990.

On that September morning in 1951 when Shem Feeney chased Katherine and Margaret Loftus away from his water pump, the children continued up Laragh Lane. Within a hundred yards they arrived at a farmyard protected from the winds of the Slieve Bloom Mountains by high, grey-painted galvanized gates set into a concrete wall. The girls knocked on the wicket door. (For Part 1, click here.)

It chanced that my mother was in the farmyard sharpening a kitchen knife on the edge of our sandstone pump-trough; otherwise, no one would have heard the knocking. The moment Mam opened the door and saw the girls, a beautiful friendship was born between the Loftus and Phelan families.

The girls returned home that morning with water in their pail, as well as milk in an old lemonade bottle with a twist of newspaper for a stopper and an invitation to call in whenever they were passing our house.

Of course Mam’s curiosity soon unearthed the story of how the Loftus family arrived in Chris Quigley’s abandoned cottage on a dark, wet and windy night. She never forgave the auctioneer for his underhandedness, and forever after slapped him down whenever his name was mentioned. “His thirty pieces of silver were a few pints of Guinness,” she would say.

Our mothers became good friends. For three years the Phelan and Loftus children visited each other’s homes. We played hide and seek, climbed trees, played “giant steps,” rode our donkey, gathered hazelnuts, explored the fields together, and fished in the canal for roach and perch. Once, while we were walking along the track beside the Sandhill field, Katherine told a scary story about a family whose children were all born with greyhounds’ heads. In my memory I can still see those dog-children running toward us through the long grass. They yelped so deeply into my frightened brain that the remembrance still stirs a tremor of terror in this old man.

Before she was brought to Laragh Lane, Missus Loftus had built a reputation in the town as a skilled seamstress. Now, with her Singer sewing machine outside the cottage door when the weather permitted, and inside when it didn’t, she plied her craft to help with the family income.

In February 1952 Mister Loftus came home to Laragh Lane from England. Several nights after his arrival he roused Katherine and Margaret out of bed. “Run into Mountmellick,” he told them, “and tell Nurse Byrne that Mum needs her quick.” Then he said, “Don’t come back home. Go to Missus Phelan until I come for you.” Later that day, the girls discovered they had a new sister, Theresa.

In 1953, Sean, seventeen-year-old son of Mister and Missus Loftus came to live in the Loftus cottage. He had spent much of his life in Mayo living with his paternal grandparents. Sean was born in Birmingham. When he was four, his uncle Nick brought him to Mayo for a short visit to his paternal grandparents and his uncle Willie. The magic of countryside freedom in comparison to big-town living enamored the child. There were grassy fields for running and tumbling, nibbling rabbits, streaking hares, singing and swooping birds, crows playing in the wind, magpies hopping, tadpoles and minnows to catch in jam jars.

When Nick was returning to England it was decided that Sean would stay on for a while with his Mayo family. Nick would return in a few months for his nephew. But shortly after his return to Birmingham, Nick died suddenly from a ruptured appendix at age 28. Sean’s father, Patrick, avoiding conscription, was on the run from the military authorities. Missus Loftus was caring for two young daughters. Children in English cities were being sent away from the German bombings. So, Missus Loftus decided to leave Sean safe in Mayo until the threat from Germany had passed.

During the war years Sean became part of his Mayo family. He attended the local National School, learned to speak Gaelic, played hurling, and at home, followed Uncle Willie everywhere. Soon after the Loftuses settled in Mountmellick, they traveled to Mayo to bring Sean home with them. But his parents and sisters were now strangers and he ran away and hid in the woods. The grandparents persuaded Sean’s parents to leave him in Mayo with them and Willie. Even though she had grave misgivings, Missus Loftus had seen a well-nourished boy who loved his grandparents and uncle. She knew she could not be able to give him what he had there.

When Sean eventually came to Laragh at seventeen, he believed he was visiting for one week. He was deeply hurt to discover his uncle Willie had in fact sent him away permanently; Willie was about to be married, and he wanted to welcome his bride into a house that would be all hers. For the rest of his life, Sean resented having been shuffled around in his younger years. Even though leaving her young son with his grandparents seemed to have been a good idea at the time, the corrosive feelings of guilt for saddling him with this sense of abandonment and rejection weighed down his mother to her last day.

When Laois County Council began building a row of houses in the town, Missus Loftus put her name on the list of applicants hoping for a place. Soon, an inspector visited her rented cottage in Laragh and condemned it out of hand, thus placing the family at the top of the list.

Their move out of our immediate lives was emotionally painful. My sisters and brothers and I cried. The Loftuses cried. The daily interaction between our two families was gone, and it was inevitable that our close bonds would change. As the Loftus children made new friends and settled into their new neighborhood, visits between our homes became less frequent. Missus Loftus continued with her tailoring and Katherine and Margaret, now out of school, took low-paying jobs in the local glove making factory. But, within a couple of years of leaving Laragh, Missus Loftus, decided her family would have more opportunities in England.

One more nightmarish memory had yet to be embedded in the minds of mother and daughters. Patrick Loftus came home from Yorkshire to help with the move across the Irish Sea. A car was hired and packed; the lid of the overflowing boot was tied down with rope. A bike was secured on the roof. Kevin Gallagher, a friend who was going back to England, asked Patrick for a ride to the ferry. The two men sat in the front with the driver, while Missus Loftus, her four daughters and a greyhound were in the back.

On the road for thirty-three miles, the men decided to stop for a drink in Naas. One drink became several, and when the car eventually arrived at the North Wall the ferry was fifty feet from the quay. The girls jumped out of the car and ran to the water’s edge shouting, “Wait for us! Come back. Come back!”

There was no other ferry departure until the next day. Kevin Gallagher decided he would spend the night in Dublin. But the family had no place to stay, so they traveled back to Mountmellick to their empty house. There they all slept on the bare floor, each a pillow for someone else. The next day they set out again.

The family settled in Suffolk in East Anglia. Missus Loftus was hired as a sewing machinist in Campbell’s factory and was able to pay for the Catholic education of her younger daughters. She also attended night school and earned her teacher’s certificate. Until retirement age, she taught her art and craft in the local secondary school.

To me, Missus Loftus shared the same grit that sustained the English people on the home front during World War II. No matter what the Germans or fate threw at them and their families, they did not surrender, and neither did Missus Loftus.

© 2021 by Glanvil Enterprises, Ltd. For more about the author, go to tomphelan.net.