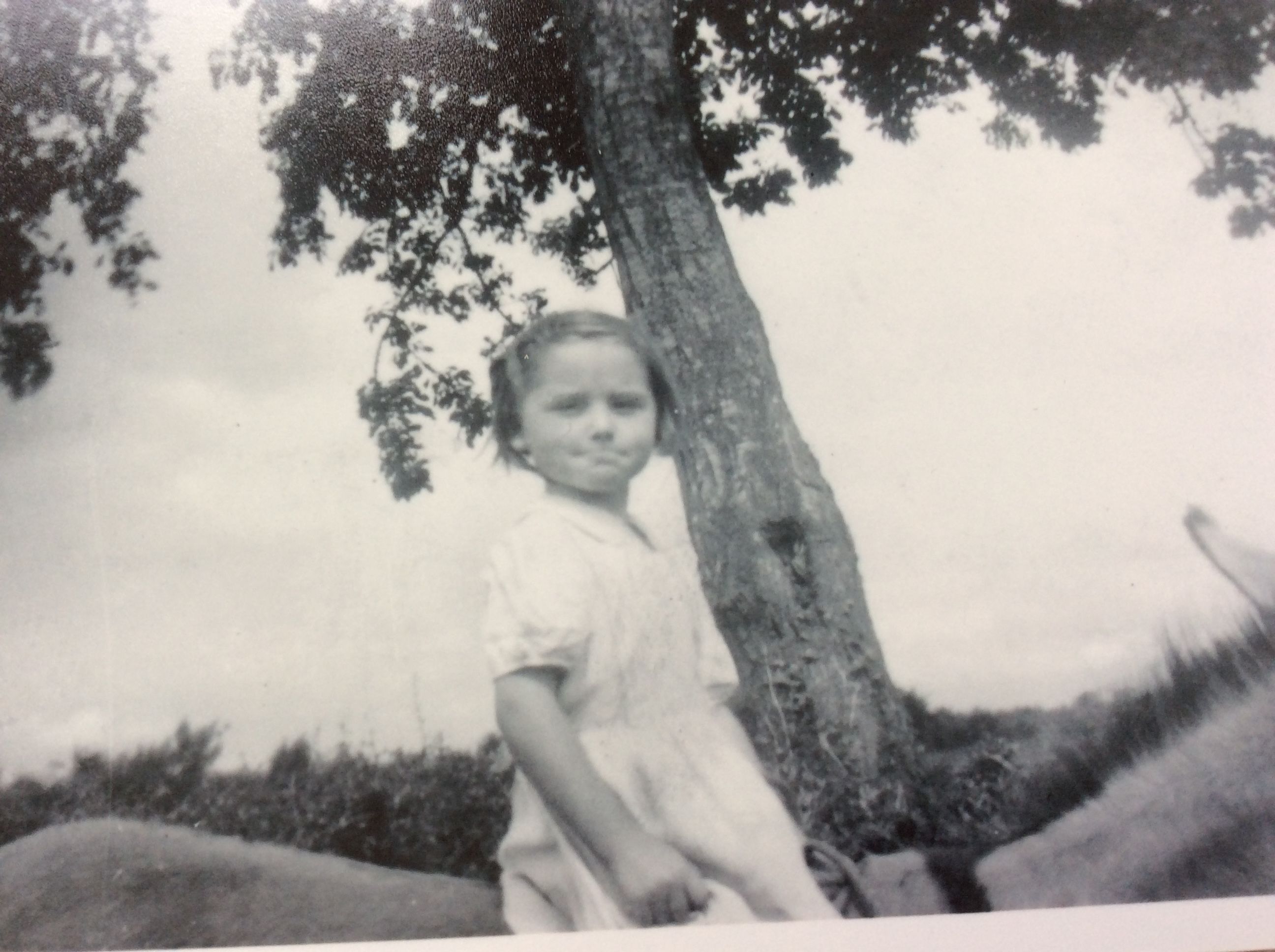 Margaret on a donkey in the early 1950s.

In Irish parlance Laragh Lane went nowhere. It was one mile long and only wide enough for the passage of a horse’s cart. Surfaced with stones and gravel, many potholes had been gouged into it by iron-shod wheels.

Halfway down this ancient lane, a narrower and more miserable track veered off to the left into a tunnel of entangled blackberry briars, ivy-choked ash, sallies, robin-run-the-hedge, sterile hazels, honeysuckle, blackthorn and whitethorn bushes. Among the mess, giant thistles and stinging nettles stretched their stems to the sky.  This was Chris Quigley’s Lane, once wide enough for his donkey cart. But, since Chris died, the spreading hedges had narrowed the track considerably and lowered the roof of the tunnel.

Chris and his sister, Lill, had lived their acrimonious lives in the inner circle of poverty in their thatched, three-roomed, three-windowed cottage. A high dungheap sat within twenty feet of the kitchen door. Chris and Lill had been born in the house, were reared there, grew to hate each other there and waked their parents there. The siblings had grown old in bitterness and disappointment there until, finally, Lill died. For the three years since Chris himself had taken his final journey in Maloneys’ hearse, the cottage had been empty and unattended.

On Sundays, when my brothers, sisters and I roamed the countryside looking for adventure, we often visited Chris Quigley’s damp, musty cottage with its aged and water-blackened thatch. The years of rain coming down the wide chimney had spread the ashes of the final fire over the kitchen floor, and left them looking like rippled sand left by an ebbing tide. Dark stains on the wall, made by seeping, dirty thatch-rain, created daubs and splotches of modern art on the walls. As we poked around in the twilit rooms, we frightened each other with whispered fears of ghosts.

“This was Chris’s room.”

Once, in the kitchen, despite cries of terror from the rest of us, Eddie lifted the seat of the settle bed. It was empty. Close together we went into Lill’s room.

“Her toes broke when she kicked the bucket, Daddy said.”

On a September morning in 1951 at eight o’clock, two well-dressed young girls holding hands walked out of Chris Quigley’s Lane. The oldest was carrying a galvanized pail. They turned right on Laragh Lane and saw a pump in Shem Feeney’s unfenced and unhedged front yard. On the spout of the water pump they hung their pail and began working the handle up and down.

Bachelor Shem, sixty-seven years old, who only left his bed when his cow moaned to be relieved of the pain in her expanded udder, heard his pump’s asthmatic gasping and creaking. But now he appeared at his kitchen door in his bare feet and his hairy legs hanging out of his thigh-high shirt tails. “Get away from me pump, ye fecking Tinkers!” he shouted.

The two girls took their pail and left. “Just walked away like that and me after roaring at them,” Shem later said. “Bold as brass the two of them, so they were.”

At the end of the Second World War the bombed cities of England had to be rebuilt, and many thousands of young men and women crossed the Irish Sea to work. Remittances flowed back to Ireland. However, a constant threat hung over many of these emigrants; under the National Service Act of 1948, all healthy males aged from seventeen to twenty-one were obliged to serve in uniform for 18 months; after that, they would be in the reserves.

In order to avoid conscription, many eligible Irishmen changed addresses, changed jobs, changed their names, went on the run from the authorities or returned to Ireland to avoid arrest. Some did what the law demanded.

The indirect cause for the appearance of two young girls, Katherine and Margaret Loftus, at Shem Feeney’s pump on that morning in 1951 went back to that Act 1948. In England, the girls’ father, Patrick, took a job as a coal miner – an essential service. “I’d never fight in a war for my own country let alone someone else’s,” he told his wife. But when his close friend was killed in a mine accident, Patrick abandoned mining and went on the run. When he feared his pursuers were getting too close, he and his family moved to Ireland.

Our town, Mountmellick, was close to where Bórd na Móna harvested peat on an industrial scale from the local bogs. The Bórd was in constant need of laborers. So it was in Mountmellick that the Loftus family settled, mother, father and two daughters. Rental spaces were scarce, and eventually the local auctioneer – real estate agent -- found the family a small, thatched cottage on the edge of the town. There was no electricity, no running water. According to her daughter Katherine, Missus Loftus, who had been born and reared in an English town, found this lack of utilities a source of embarrassing humiliation for her.

A few years later, while Patrick was back working in England, the auctioneer told Missus Loftus the cottage she was living in had been sold, that the new owner needed the house for herself. “But I have a nice house for you,” he said.

Missus Loftus asked to see the new place. “I’m too busy right now, but I will take you there tomorrow. In the meantime get your things together and be ready to move when I bring a lorry on Friday.” The auctioneer never got around to showing her the new rental.

Everything was packed before ten o’clock on Friday morning. Katherine and Margaret, along with their new sister, Áine, spent the day at the front door waiting for the lorry. Darkness fell and so did heavy rain. Missus Loftus was putting the beds back together when the lorry finally arrived.

The auctioneer had brought Peetie Maher to help. Assuming an air of great urgency, tut-tutting Missus Loftus’s questions and urging the children out of the way, the auctioneer and Peetie loaded the family’s belongings onto the wet lorry.

“Where are you taking us?” Missus Loftus demanded for the fourth time.

In the middle of the empty kitchen, the auctioneer put his hands on his hips. “Missus Loftus, I don’t think you appreciate what is happening here. I am doing you a favor. I am paying Peetie Maher to help with your move. Do you think for one minute that I enjoy being out a wet night trying to help a neighbor? That’s what I’m doing, Missus Loftus, and if you don’t appreciate what I’m doing, I will unload your stuff and go home. The key to this house will be in my pocket, and you and your children will be outside in the rain.”

Into the cab of the lorry the six people squashed, the three sisters clinging to their mother, the auctioneer sitting in the center on an upturned bucket with a leg each side of the stick-shift lever. Peetie Maher kept his window lowered and used a hand-held rag to clear the rain off the windscreen. After two miles the lorry left the smooth surface of the town’s street and bounced its way onto Laragh Lane. Lashed with rain-drooped bushes and swaying from pothole to pothole, it finally turned into Chris Quigley’s Lane.

Through this tunnel of dripping, wild-growing hedges, the lorry slapped and sloshed its way until it passed through an open gateway and onto a track across a three-acre pasture. When the lorry stopped near the door of the cottage, the auctioneer shooed the family into the kitchen, Missus Loftus holding a paraffin lantern. Huffing and puffing to lend drama to their hurried efforts, the auctioneer and Peetie Maher carried everything into the kitchen. When they brought in the rain-wet double mattress they placed it on the floor. All the belongings were spattered with leaves and pieces of bushes from the tunnel-roof of Chris’s lane.

“You can put the frame together after a good night’s sleep,” the auctioneer said to Missus Loftus, and he and his helper departed.

Mother and three daughters slept together on the mattress where it had been left, until Katherine was wakened by drops of water falling on her face. The lantern was lit, the mattress was moved and pots and bowls were placed to catch the brown water dripping from the roof. The following morning the family discovered they were living in the corner of a field with a man-high dungheap blocking the view from the kitchen door and window.

Missus Loftus sent Katherine and Margaret to Laragh Lane to get some water from one of the houses there. The girls carried the galvanized buck between them and followed the track across the pasture to the mouth of Chris Quigley’s Lane. In the semi darkness, they chanted rhymes aloud to keep up their courage. When they stepped out onto Laragh Lane they turned right and, after twenty yards saw the water pump in Shem Feeney’s yard.

© 2021 by Glanvil Enterprises, Ltd. Part II will follow next week in next Wednesday's digital/print edition and online later in the week. For more about the author, go to tomphelan.net.