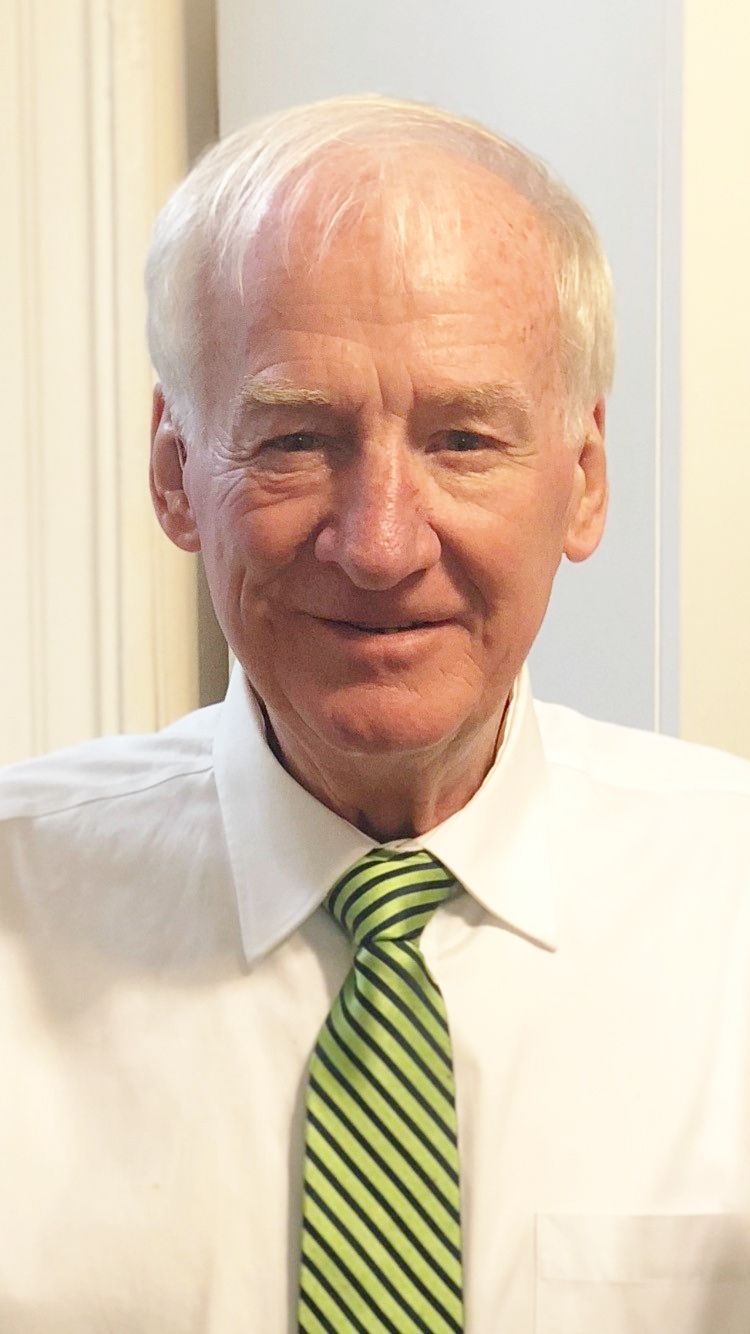 Larry McEvoy (Laurence J McEvoy) passed away on August 28th, 2021, at home in Murray Hill, Manhattan, New York after a tough fight with cancer. Born in Mountmellick, Co. Laois, Ireland on May 28th, 1941, he was 80 years old.

Larry was a man of constant enthusiastic energy and happy welcome. A man of loving heart for all whom he held dear and an ardent defender of those suffering injustices in Ireland, in the US and across the world.

As a boy reared in Mountmellick, Co. Laois, Ireland he was raised in his family clothing shop and dairy with a keen eye towards athletics and study. He attended Knockbeg College, Co. Carlow followed by seminary training at the Pontifical Irish College in Rome for some years. He then attended University College Dublin School of Agriculture, eager to be part of the modernization of farming in Ireland. He began a duck hatchery in Mountmellick, determined to take a scientific approach to the enterprise.  In university he also took on a leadership role of the Ag. Society hosting seminars, travel and dances.

In these college years in Dublin he met his wife Judith Hearnden, whom he married in the UCD Chapel in 1972.

Spurred by the eruption of brutality by the British government in response to the Civil Rights movement in the north of Ireland, their violent occupation as well as other decolonial struggles around the world he turned his sights towards studying International Relations in New York City. Here he achieved his Masters at The CUNY Graduate School and attended NYU, beginning in 1971. In this new environ of the Irish diaspora and the international City he found his life's calling, working towards a United Ireland and a de-colonized world. Upon graduation he went to work at the United Nations Indonesian Mission as a speech writer from 1977 to 2002 with a focus on the economies of the non-aligned nations. He dedicated himself as well to civil rights work in the US.

In 1974 he helped found the Irish Freedom Show (Irish Circle) on cable TV in the tri-state area, giving voice to the Irish civil rights movement with news, editorials, debate and interviews both political and cultural. Some highlights of the show’s 16 years on cable include interviews with Irish revolutionary Dr. Nora Connelly, who served in the 1916 Rising alongside her father James Connelly; Joe Doherty, while imprisoned at the Metropolitan Correctional Center; John Stalker, whose inquiry uncovered the British “shoot-to-kill” policy; as well as supporting the 1981 Hunger Strikers families.

In the late 1970s he founded Celtic Productions which promoted and distributed documentaries of both the freedom struggle and realities in the north of Ireland, as well as Irish music and dance productions. He also provided video services to the broader Irish community.

In 1978 he and Judy began their family. They moved to Bellerose, Queens, NY in 1982 to raise their 4 boys. They eventually moved back to Manhattan in 2015.

He was a fast friend and believed in bringing people together. He took great pride in his roles as President, then Vice President with Mike Dunphy in the Co. Laois Association, every year unfurling their proud banner in the New York City St Patrick's Day Parade. Here too in the United Irish Counties he found himself early on speaking up for an inclusive parade for LGBTQ participation as well as standing tall as the first county association to participate in the St Paddy's For All Parade in Queens NY. In his last years he supported and advocated for Irish solidarity with the Black Lives Matter movement, including within Ancient Order of Hibernians.

Not a man to ever fully retire he began a vending business, LJ Enterprises, which brought him to meet people across the City and Nassau County, most happily with his friends at the horse stables on the west side of Manhattan.

He was a happy grandfather who delighted in his grandchildren, all within reach of the City. He enjoyed taking well deserved trips in the US, around the world and back home to his family in Ireland.

Larry is survived by his loving wife Judy (née Hearnden) McEvoy in their 50th year of marriage, his sisters Elizabeth, Jass (Marty Meinardi), Grace McEvoy and Rovena (Michael) McCarthy all of Co. Dublin, as well as his brother Fr Patrick J McEvoy of Edenderry, Co. Offaly. He is predeceased by his elder sister Mary McEvoy (David O'Brien) and his young brother John. He was beloved by his 4 sons who survive him, Rory (Grainne Coen) of Sag Harbor, NY, Cormac (Stephanie Wheat) of Little Falls, NJ, Shane (Tsedeye Gebreselassie) of Flatbush, Brooklyn and Hugh (Fiona Macabrey) of Carroll Gardens, Brooklyn, NY. He is missed by his 6 grandchildren Moira, Eamonn, Aisling, Bennett, Lochlan and Oisín.

We miss his joy, as do the many friends and comrades he has made along the way.