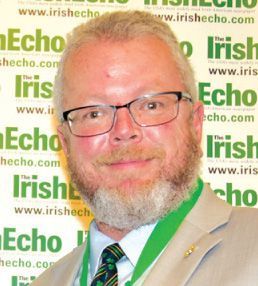 The Ancient Order of Hibernians wants to see a freer flow of people westward across the Atlantic.

In a letter to President Joe Biden, the National President of the Ancient Order of Hibernians, Daniel J. O’Connell, called for an end to the Covid-linked ban on travel from Ireland to the United States, which has been in place since March 2020.

The letter states: "The Ancient Order of Hibernians, the largest Irish American organization in the United States, calls upon you, Mr. President, to lift the travel ban that currently applies to Ireland and the rest of Europe and replace it with a sensible and scientific protocol that permits a resumption of travel.

"When first introduced in March 2020 as Covid-19 spread across the globe with no known vaccine and at a time when the United States was closing businesses and schools and barring social gatherings domestically, the travel ban was a prudent and sensible precaution.

"While much still needs to be done in the fight against COVID-19, the world is now in a different place a year and a half later with the introduction of effective vaccines and proven testing.

"Just as it made sense to ban travel when the U.S. was itself in self-imposed social isolation, it makes no sense to maintain a travel ban at a time when we are permitting thousands to gather in sporting venues.

"It is particularly irrational when you consider that 70% of the adult population of the E.U., including Ireland, are vaccinated compared to only 51% of Americans.

"From a purely rational and scientific standpoint, a vaccinated person traveling from the E.U. entering the U.S. and following a prudent testing protocol both before and after arrival poses less of a risk to Americans than the unrestricted travel of many of their fellow Americans from adjoining states.

"Mr. President, the current ban on travel from Ireland and the E.U. has outlasted its effectiveness. Rather than protecting, it is now hurting America and Americans by cutting us off from the rest of the world.

"For Irish Americans, the current travel ban has rolled back the clock to the days when, in the words of James Joyce, the Atlantic was a ‘bowl of bitter tears’ separating families and loved ones. The current travel ban precludes the contact and cultural exchanges necessary to keep Irish America vibrant and maintain the extraordinary special relationship that Ireland and the United States have enjoyed dating back to before either was a sovereign nation.

"The Hibernians ask respectfully, Mr. President, that the United States implement a COVID travel policy that follows science rather than absolutes; science which at this time says that a travel ban on Ireland and Europe is not needed.

"Yes, there are places in the world where COVID numbers are high, and vaccination rates are low, and from where allowing travelers to enter the United States would be unwise. It is only prudent to restrict entry from those countries as the United States, in cooperation with the rest of the world, helps them to recover.

"Still, it is unreasonable to prohibit travel and punish those nations such as Ireland who have stepped up to the challenge of COVID by the continued application of a global “one size fits all” travel ban.

"We ask that the United States implement a sensible 'red, amber, green' system, as have other nations, where travel restrictions are proportionate to the current threat posed by travel from that nation. Under such a system, the Hibernians respectfully request that travel from Ireland to the United States be restored immediately."