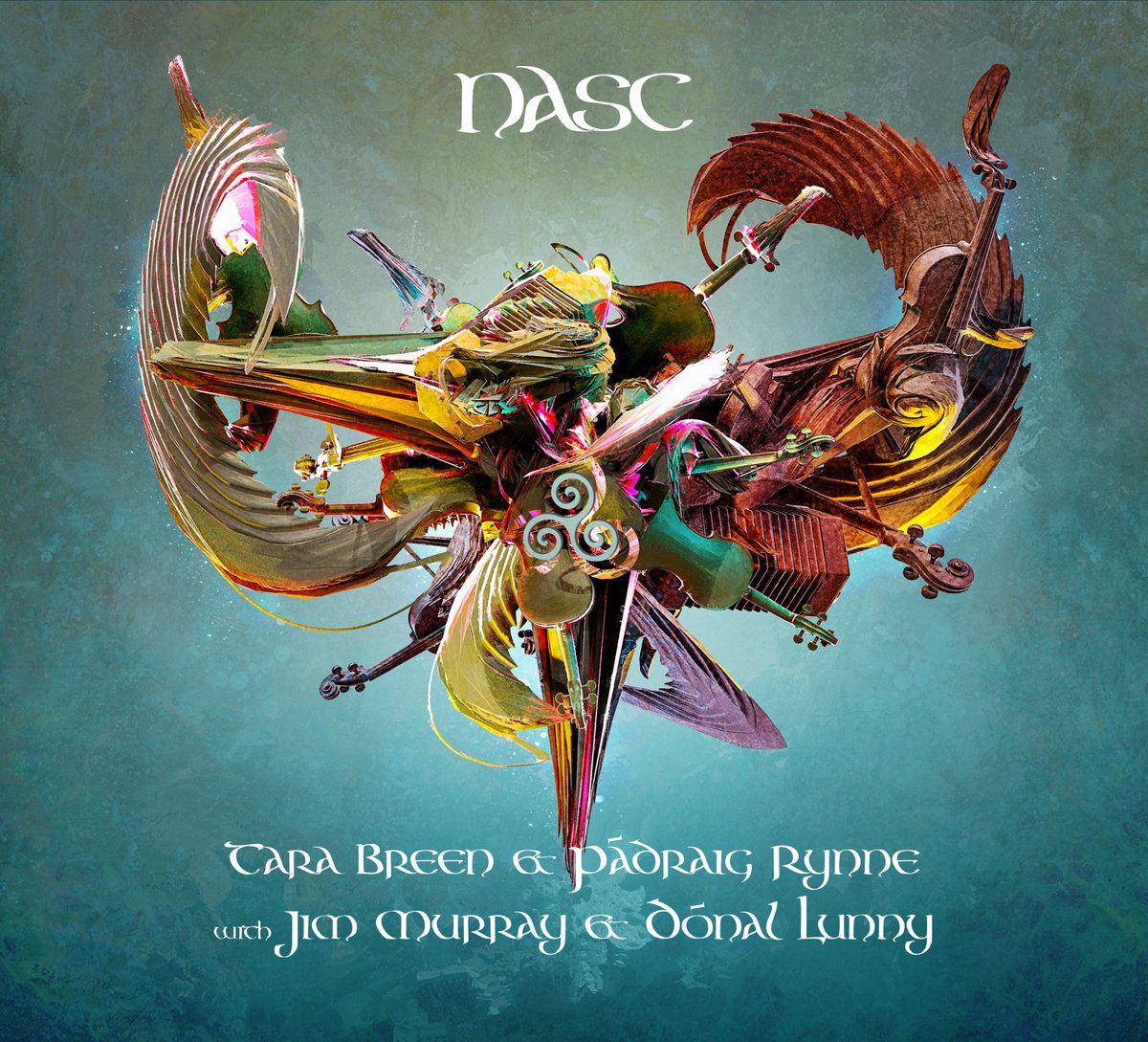 I’m always thrilled when I get something from Pádraig Rynne because I know it’s going to be interesting, and I’m pleased to say his latest offering has proved no exception.  “Nasc” is the new album by Tara Breen (fiddle) & Pádraig Rynne (concertina) and it’s a crisp, extremely well done collection of instrumental tracks that showcases incredible musicianship and can boast of a bit of legendary flash.

I’ve written about several of Rynne’s projects in this column over the years.  For those who mightn’t know, Rynne (padraigrynne.com) is one of the finest concertina players in Irish music.  He’s led some really incredible, forward-looking groups like Guidewires and NOTIFY, and he has curated and toured with some noteworthy touring projects like Dán, Atlantic I/O, and the Atlantic Arc Orchestra.  He is an extraordinary musician who has the technical ability to flow between moods with ease, however the most noteworthy part of his approach is the taste he brings to the whole.

Despite the somewhat familiar approach, they sound incredibly fresh.  Then there are tracks like the polka set “Greenlights / …,” which features a pair of Rynne’s own composition (and there are several of his tunes on the album) that challenge the listeners ears.

Breen, who is from Co. Clare, is similarly impressive.  Over the course of her career, she’s won eleven solo and 10 group All-Ireland titles (including the Senior Fiddle in 2011), she was a member of the bands Ciorras (with Ciara Cunningham, Tommy Fitzharris, Robert Harvey, James Mahon, Tadhg O’Meachair, Dermot Sheedy, and Stephen Rooney) Ríanta (with Conor Moriarty, Stephen Rooney, and Eamon Rooney; originally the Tri-Tones), and Stockton’s Wing, and in 2014 she toured with The Chieftains.  It’s an extremely impressive resumé that is backed up with rigorous, engrossing musicianship.

The album also features the playing of Jim Murray (guitars) and Dónal Lunny (bouzouki & bodhrán), both of whom add to this album immeasurably.  From Co. Cork, Murray (www.jimmurraymusic.com) has been on the scene for over twenty years.  During that time, he’s become a first-call guitarist for many in the traditional world, like Altan, Mary Black, Seamus Begley, and Sharon Shannon, but he has performed or toured with the likes of Sinead O’Connor, Steve Earl, and Shane McGowan as well.  His guitar playing is imaginative an a brilliant complement to Rynne and Breen.

*Meet The Band* Padraig Rynne - Concertina
Described as "one of the freshest sounds in Irish music" by fRoots, Pádraig Rynne is a virtuoso musician, prolific composer and is regarded as the finest concertina player in Irish music today. #concertina #kickstarter pic.twitter.com/PYBfe1v1tU

Lunny is, of course, a legend in the music and needs little introduction.  While his work with Planxty, the Bothy Band, and Moving Hearts is widely renown and historic in scope, his partnership with, say, Frank Harte and his roles in the bands Coolfin, Mosaik, and Usher's Island were similarly important.  He and Rynne have worked on several projects over the years, including Triad and Atlantic Arc Orchestra, and have built up a strong rapport over the years.  Indeed, there are few in Irish music who reach such consistent heights and his involvement here is auspicious.

What he brings here, both in terms of accompaniment and vibe, is crucial.  All this adds up to some simply outstanding music.  Comprised largely of Irish traditional tunes, the album includes the odd one of Scottish, Breton and Asturian origin.  Tracks like “The Silver Strand / …,” the set of reels that opens the album, the jigs “True Logic / …,” and the reels “Johnny Doherty’s / …,” are fairly straightforward in scope, but the thing that sets them apart is how beautifully they’re realized.

Despite the somewhat familiar approach, they sound incredibly fresh.  Then there are tracks like the polka set “Greenlights / …,” which features a pair of Rynne’s own composition (and there are several of his tunes on the album) that challenge the listeners ears.  Rynne’s compositions are quite recognizable in general because they often play with meter within form in creative and musically coherent ways.  This is the case here, especially with respect to the first tune in the set, but both are gorgeous and complemented by being set in a superb arrangement.

“Hats off to Dod / …” is another lovely track and one that features tunes by Rynne, Máire Ní Chathasaigh, and Joe Liddy and includes some lovely harp playing by Elaine Hogan (who, along with Sheila Garry released the brilliant “The Shores of Lough Breda” in 2015) which makes the arrangement stand out.  I particularly recommend “St Mat / …,” which is the track that features the tunes from Breton and Asturia.  It covers a lot of ground in terms of mood and to me is one of the album’s standouts.

“Nasc” is a fabulous album in which progressive listeners will revel, but it’s also one that won’t trouble those who love the pure drop.  The music is warm and inviting throughout and confers a very pub-ready style.  Rynne and Breen have fabulous chemistry together and have found backing musicians who are more than mere accompanists but who are stakeholders in the game.  Murray is brilliant, as is Lunny, who really sounds amazing here.  What really puts this album over the top is the quality of the recording itself. It’s mixed in a way that maximizes the space in the mix and allows one to really hear the nuance of each player, but it does it without sacrificing the overall sound.  In this respect, I think it’s very production-ready – although this is music that would be at home in a session setting, it would suit film and television production looking for something modern and interesting.