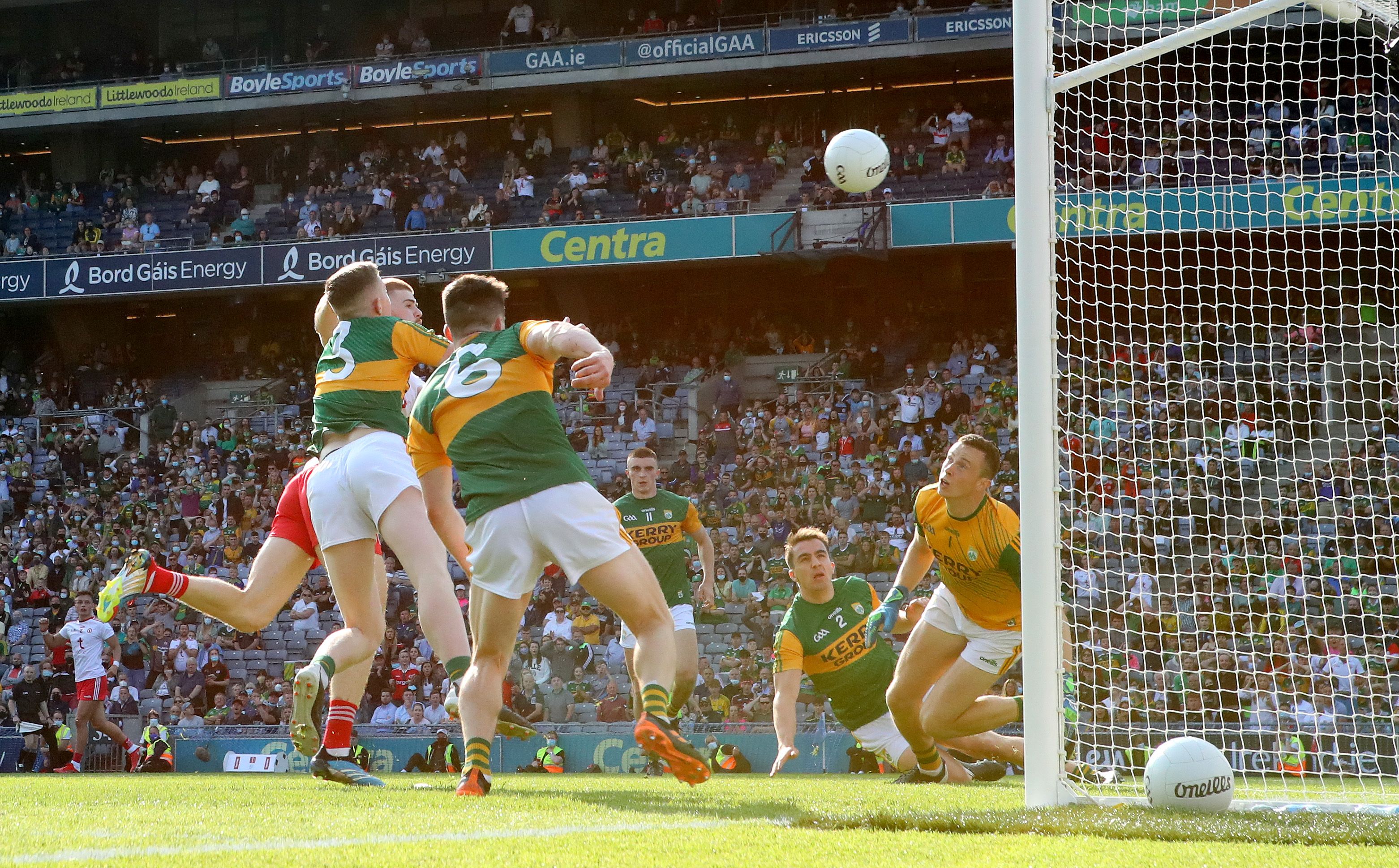 You could be rich this morning if you had bet big on both Dublin and Kerry losing their All Ireland semi-finals.

Many saw Dublin’s demise coming sometime soon but didn’t think Mayo were the side to halt their march to a seventh consecutive title.

Similarly, there were those who had their doubts about the Kerry team – particularly their full-back line, yet hadn’t they just hit Tyrone for six goals in the league a few months ago, and ending up winning by 16 points without having to break sweat?

Ah, yes, hindsight is indeed 20-20 vision, but you would have been either a brave person or a fool to put big money on Tyrone last Saturday.

Leaving aside the Covid-19 outbreak, which in theory should have affected their stamina and fitness, the above dressing down by Peter Keane’s team would have most keeping their money in their pockets rather than bet on the Red Hand to come out on top.

What Saturday’s match at Croke Park proved yet again is that there is a serious chasm between a league game in Killarney and the cut and thrust of an All Ireland semi-final.

The inquest in Kerry will be savage, as always, as the fans there felt with Dublin gone, it was only a question of turning up and reclaiming Sam for a journey to Tralee, Killarney and all the other Gaelic outposts that are synonymous with the green and gold.

No one told Tyrone that such a script was written and if they did, well, the Ulster champions just tore it up and presented one of their own – a compelling page-turner which saw them go at Kerry like big cats around a prey. They never ceased to get among their startled foes who ultimately were worn down by the constant tackling and stubbornness of their opponents.

The irony of the game was the goals came again but this time it was Tyrone who got the vital green flags – every one at a vital time in the game. Kerry on the other hand saw their goal flow dry up with Stephen O’Brien’s square infringement and ground handling indiscretion the neares they came to actually putting a genuine three-pointer on the board.

Kerry will point to the five-week gap they’ve had because of Tyrone’s threat to pull out of the series due to Covid-19 but in truth, that shouldn’t have mattered. Certainly in Mick O’Dwyer’s time, he would have used the extra weeks to turn up the heat in A vs. B games in Killarney, honing his side to be at perfect pitch for the big day.

And this may be where Keane parts ways with the Kingdom because after three chances, he seems to have been caught on the hop in particular against Cork last year and again on Saturday versus Tyrone.

“Obviously, we came here with an ambition of getting to a final. That’s eluded us so there's a lot of disappointment. One of the things we had been doing a lot throughout the year has been scoring goals. We had four opportunities today, didn't come home with anything,” Keane said. “I think Tyrone had three goal opportunities and came away with three. Is therein the problem? We had something like 33 shots at the posts and got 23 points.”

Referring to the postponement he said: “|Obviously, you set out with an overall plan at the start of the year and you had to deviate from it. We originally thought we had a three-week window. Then it was becoming a four week window and then it became a five week window. Look, that's not offering up excuses here today.”

Good. There should be no excuses. Even in the first 25 minutes of the Cork game, Kerry’s last line of defense was under pressure. And while they looked better at time on Saturday, the fact is that corner-forwar Conor McKenna scored two goals, with super-sub full-forward Cathal McShane get the other – and three points for good measure.

Message to Kerry – don’t come back to Jones’ Road until you have found the modern day version of John O’Keeffe, Marc Ó Sé or Tom Sullivan, the elder.

You also have to give great credit to the Red Hand defense who took on the immense challenge of dampening down the fires the Clifford brothers and Sean O’Shea are capable of creating.

While David Clifford was unstoppable in scoring points, he was still prevented from scoring a goal or two – something Kerry have almost come to rely on in tight matches such as these.

The first goal by McKenna, who was seriously outplayed in his one on one with Tom O’Sullivan, was the tonic the Ulstermen needed to believe as it gave them a goal lead in the second quarter of the first half.

The second goal from McShane following good work by Darragh Canavan revitalised Tyrone at a time you felt the game might be a step too far for them.

So tied then at 2-11 to 0-17 at full-time, it was a question of who had the hunger and the stamina to step it up in the two 10 minute periods of extra time. McShane again led the way by popping over two points against a wilting Jason Foley, who had played well for so long. Then already two points to the good, the winners stuck the stake in the Kerry heart as McKenna again was on hand to lash the ball home following a horrendous effort by Jack Barry to clear his lines.

In fairness to Kerry,  and they won’t get much of it this week,  they never gave up despite the huge loss of David Clifford to injury and their earlier failure to take advantage of black cards to Conor Meyler and Darren McCurry.

Paul Murphy reduced the arrears to four and a pair of Diarmuid O’Connor points – he should have started in hindsight – put the game back into the melting pot.

McShane responded but Kerry weren’t done as points from Paudie Clifford and the very disappointing Paul Geaney cut the deficit to the minimum.

Was there a score in Kerry to bring the game to penalties. Tommie Walsh got possession and cut across the pitch to make a better angle but his shot went to the left of the near post.

Tyrone joint manager Feargal Logan was delighted with how the game transpired in favor of his county. “Happiness, but it was quite a game, I thought it was going to go to penalties.

“But the reaction is we were treated very fairly by the Association and we were more than appreciative of all that we got when ill health struck our camp. We’re more than thankful on that.

“If we say more than that it sounds as though you’re patronising and All-Ireland semi-finals are very sore defeats. But two weeks ago we were potentially out of the competition and that’s the relief I feel.

“I have to commend everyone, Kerry, everyone in the Association who bore with us - and the Tyrone players who represented the county today with distinction.”