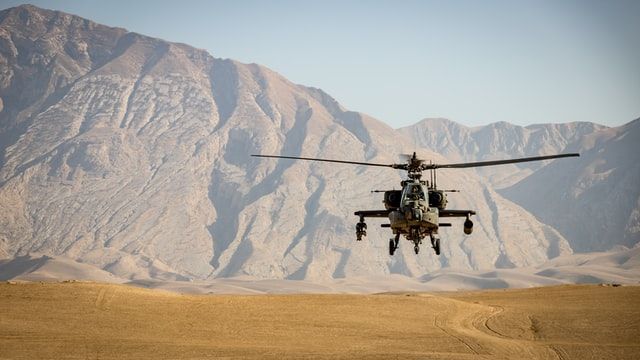 END IS NIGH: A U.S. Apache attack helicopter in Afghanistan last year. Andree Klimke on unsplash.com

Afghans, desperate for escape, hanging from an American plane in Kabul. Desperate South Vietnamese clamoring at the gates of the U.S. embassy.

Some images are destined for replay over and over.

And there are quite a few such images coming out of Afghanistan in recent days in what has been the shocking culmination of a slow moving, but inexorable, twenty year failure.

But before anything else we should recall why the U.S. entered Afghanistan in October, 2001. It was in pursuit of Obama bin Laden, an absolutely understandable and justifiable mission.

That the mastermind behind the 9/11 attacks was eventually brought to justice in Pakistan was only a reminder that Afghanistan was part of a bigger geopolitical picture.

Murderous jihadism is widespread in the world and not just confined to Afghanistan, a country gifted with extraordinary natural beauty, and burdened with an extraordinarily troubled history, a history inflamed over the centuries by foreign military intervention.

But there are ways to leave a place and ways to leave a place. Before any announcement was made, and a specific withdrawal date was mentioned pretty much every Afghan who worked with the U.S. over the years, prominently and quietly, should have been given a chance to leave if they so requested and facilitated in that leaving.

But even without disturbance from the outside, Afghanistan has been a place of near continuous internal disturbance for centuries; and it is once again disturbed to put it mildly.

There will be a lot of argument and debate here in the U.S. over the precise nature of the final U.S. exit. The Biden administration was carrying out the stated intent of previous administrations, and is indeed in lockstep with public opinion.

But there are ways to leave a place and ways to leave a place. Before any announcement was made, and a specific withdrawal date was mentioned - in this instance September 11 - pretty much every Afghan who worked with the U.S. over the years, prominently and quietly, should have been given a chance to leave if they so requested and facilitated in that leaving.

After that the U.S. diplomatic presence should have been wound down, as quietly as possible. The last to leave would be the ambassador and the military - inside the planes as opposed to hanging on the wings.
The Biden administration seems to have been taken back by the speed of the Taliban victory but the administration, as was the case with previous administrations, was fully aware of the thoroughly rotten and corrupt state of affairs in the Afghan government and military. To call both a house of cards would be a supreme understatement.

Similarly, the assessment of the multi-pronged U.S. intelligence community was way off. You could have envisaged the debacle to come from a perch atop half the bar stools in the fifty states. You sure didn't have to be in Langley, Virginia or the like.

The learning curve, once again, was an all too steep climb for the supposedly learned.

President Biden made a political mistake in attacking President Trump. Trump's administration engaged in "peace talks" with the Taliban. Again, that would have been laughed out of the room from many a bar stool.

But Biden is now the president in charge. He doesn't own Afghanistan, or the last twenty years there. But he does own the last weeks and days in Kabul.

As for the people of Afghanistan, especially women and girls, who are now facing the prospect of a return to a brutal medievalism. That's for another editorial.

And as for the possibility that Afghanistan being once again a cradle for terrorism. That, too, is for another day.

Right now we are left with the appalling images of failure, and not just on the part of the United States.

The wider world, the United Nations to the fore, now has a new mission.

And that mission is to curb, as best as possible, the kind of barbaric horrors that the Taliban are all too capable of inflicting on their own people.