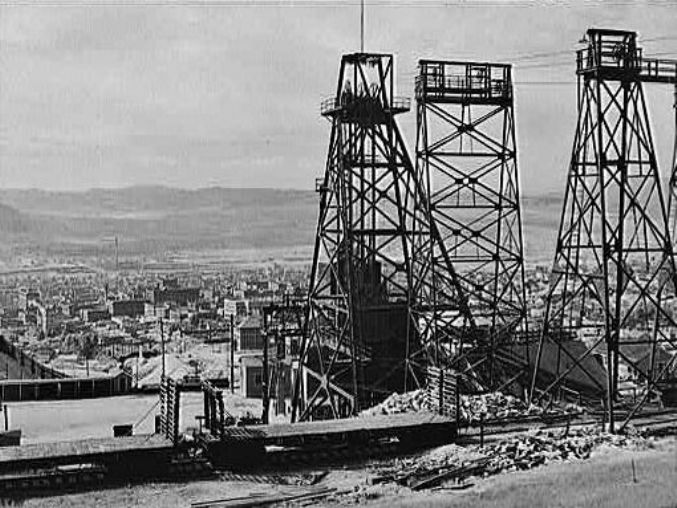 In 1856, the 14-year-old Marcus Daly, one of 10 children from an impoverished peasant family from Derrylea, Co. Cavan, arrived in New York City, part of a massive wave of Irish refugees trying to escape rural poverty.  Daly, like most other rural Irish immigrants, came with little education, very little money and few marketable skills. Daly, however, would through a combination of hard work and native intelligence become one of the wealthiest Americans of his era and one of the legendary “Copper Kings” of Montana.

Daly’s later success in America is even more striking because of the poverty, which he endured during his first five years in America. Like many other Irish immigrants, he found poorly paying, back-breaking work as a stevedore, unloading ships in New York harbor. Hearing tales of men striking it rich in the goldfields in California, Daly saved half of his meager salary and in early 1861 he booked passage on a clipper ship bound for Panama and then traveled on to San Francisco where he had an older sister.

In California, Daly worked as a ranch hand, logger and railroad worker, but it was a fellow Irishman, Thomas Murray, who changed Daly’s life by convincing him to go into mining.  Daly and Murray went off to Calaveras County, where they built a cabin and began to mine. It was also there that Daly made a lifetime friendship with author Mark Twain. While other men might have focused only on sluicing some small claim and hoping to get rich, Daly began studying every aspect of mining and he soon proved himself a first-rate mine manager. Hearing of a great strike of the Comstock Lode in Virginia City, Nev., Daly traveled to the silver state, where he met George Hearst, who would become one of his financial backers in years to come.

In 1871, Daly settled in Ophir, Utah, where he became a foreman for the Walker Brothers, a wealthy banking and mining firm, but he would find more than work there. Daly met his future wife Margaret Evans while inspecting a mine at Ophir with Margaret and her father.  Visiting a mine, she lost her balance and literally tumbled into Daly’s arms. Margaret was just 18 years old, and Marcus was 30, and within the year they were married. The Dalys’ first two children Margaret Augusta (Madge) and Mary (Molly) were born in Utah.

In 1876, the Walker Brothers sent Daly to Butte, Mont., to evaluate the Alice mine as a silver producing property. That same year only 300 miles from Butte General Custer was famously defeated at the Battle of the Little Bighorn. The Alice owners would permit no outsider to enter the mine, so Daly disguised himself as a simple miner and got himself hired. Realizing the value of the mine, Daly bought it for the Walkers, while keeping a one fifth interest for himself.

He began to manage the mine, but while most prospectors focused solely on silver, in the late 1870s, Daly began to take an interests in the green outcroppings he saw all around Butte. He soon realized Butte was a motherload of copper. Ever a shrewd businessman with an eye to a good business deal, Daly learned from an Irish American prospector named Michael Hickey who lacked the financial resources to mine deeper than 150 feet that he would sell his Anaconda mine. Daly, suspecting the mine harbored rich deposits of copper, sold his stake in the Alice mine and bought a third of the Anaconda mine, despite the warnings of geologists who thought it nearing exhaustion. Daly explained his belief in the potential of Anaconda to his rich friend George Hearst who, along with two business partners, joined Daly forming a company with the financial resources Hickey lacked to mine the Anaconda.

Daly was impatient to discover if the Anaconda had a vein of copper. He had been a working miner and he had no problem being down in “the hole,” working with his miners. One day in early 1882 he ordered his miners to start a crosscut. After blasting away some rock, he picked up a piece of rock and examined it. Looking at his mine foreman, Mike Carroll, he cried out, “Look, look, Mike, we’ve got it!”

It was a vein of copper 50 feet wide, the richest vein of copper in the world. Cleverly, Daly closed the Anaconda, St Lawrence and Neversweat mines, putting out the word that they were not viable and causing prices on surrounding properties to drop precipitously. Daly secretly purchased the surrounding mines at a fraction of their value. Then he re-opened the Anaconda as a copper mine and proclaiming that Butte was "The Richest Hill on Earth."

Daly had found this huge vein of copper just as demand for it was exploding.  Thomas Edison had just built the world’s first electric power plant using copper wiring, which he also used in his telephone. Copper was also needed for telegraph wires and electric lines, but the world’s only copper smelter lay across the Atlantic in Wales, which made processing copper ore costly.  Daly realized that he could make a fortune by opening America’s first copper smelter in Montana, eliminating the great cost of transporting copper ore. With the backing of Hearst and his partners, he built a smelter on a site 28 miles west of Butte. To accommodate the workers and support his smelter, Daly built the town of Anaconda. Daly purchased coal mines to fuel his furnaces, bought whole forests for timber and built power plants to supply the mines. He also established a number of banks, and a newspaper, the influential Anaconda Standard. By 1890, his firm, Anaconda, was mining and refining over seventeen million dollars’ worth of copper a year, making Marcus Daly a millionaire.

Daly, though, never forgot Ireland, or his struggles as a poor immigrant. He brought over eight of his siblings and Daly treated his workers better than most other mine owners. He encouraged Irish immigrants looking for work to come to Montana, the majority of whom came from the Beara Peninsula, the one-time home of the Mountain Mine and the Castletown-Bearhaven Copper Mines. He paid good wages, while allowing unions to set up in his mines. He made donations to many Irish causes, including Michael Davitt’s Land League and built the parish church in his native parish of Crosserlough, in addition to churches in Montana.

He bought a vast tract of land in Bitter Root Valley, Mont., and built an elegant mansion in the heart of the valley just outside the town of Hamilton, Montana. By 1889, he had established a 22,000-acre ranch, the pride of which was his racehorses. Daly had an amazing eye for horses and decided to race the best horses in America, dressing his riders in Copper and green. He bought the fabled horse Tammany from Gen. William H. Jackson by in 1891, paying $2,500 for the then two-year old colt and the horse soon vindicated Daly’s purchase by winning the Great Eclipse Stakes that year. He was even better as a three-year old in 1892, winning races like the Lawrence Realization Stakes, the Jerome Handicap, Withers Stakes, and Lorillard Stakes. In 1893, a match race was set between Tammany and the champion horse of the Eastern states, Lamplighter, a son of the legendary sire Spendthrift. Daly promised Tammany prior to the race that if he would build him a castle.  The 15,000 people who packed into the track in Guttenberg, New Jersey were all treated to a legendary run by Tammany who defeated Lamplighter by four lengths. Daly kept his word to Tammany, building him a “castle” that was truly fit for a king. The barn was designed to rival homes in the area with its beautiful brick design and copper fixtures. Thick cork floors kept the horses from slipping and the stalls were heated and lined with velvet. Joining Tammany in this castle were Daly’s four other prized stallions: Hamburg, Inverness, the Pepper and Ogden. Another Daly racehorse, Scottish Chieftain, remains the only Montana bred horse to win the Belmont Stakes in New York.

In 1899, his company went public, making Daly $39 million. He leased a home on 5th Avenue in New York that was built by William Waldorf Astor. Cornelius Vanderbilt was one of his neighbors. Marcus Daly died in New York City at age 58 in 1900. When he died, he was one of the captains of American industry and was known as the copper king. Thousands of people attended his memorial mass in Butte and the city commissioned a statue of Daly sculpted by the legendary Irish artist August St. Gaudens. His mansion in Hamilton is now a museum. Today, Butte, Mont., remains the American city with the highest percentage of Irish Americans and many of those people are the descendants of people who worked for Daly.