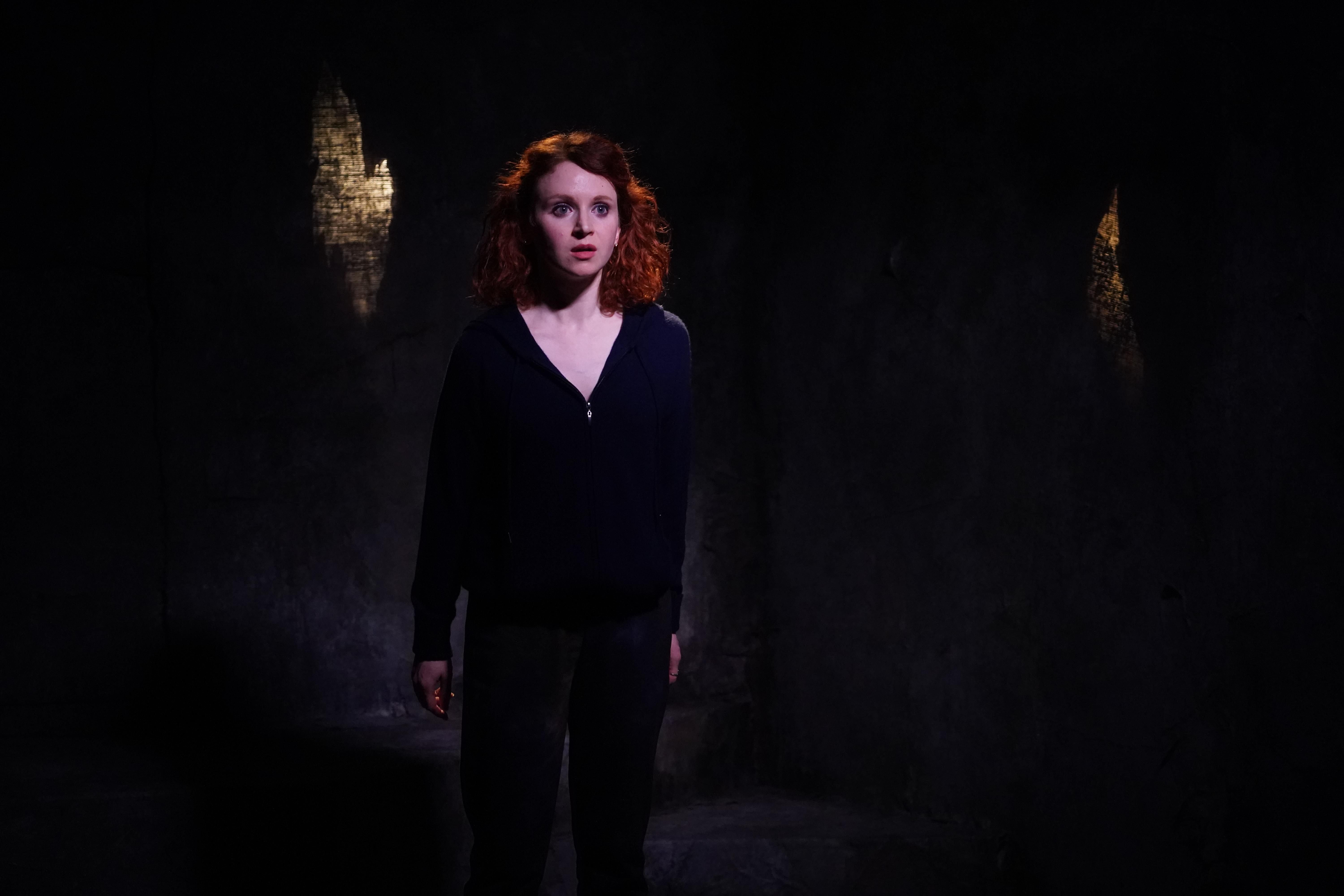 Jenn Murray is the Girl in the Irish Repertory Theatre’s production of “The Girl is a Half-formed Thing.” PHOTO BY CAROL ROSEGG

Rationality loses meaning in her world

Wounds that are left to linger, anger unquelled, and atrocities left unanswered, need a place to be spoken, and to be heard, before it’s too late. For many of us, we seek this dire reprieve in the theatre; a place that’s sacred and safe.

Seldom has such an act been done with such caring fragility than in this production of Eimear McBride’s novel “A Girl is a Half-formed Thing,” adapted by Annie Ryan and directed by Nicola Murphy, cradled in the W. Scott McLucas Studio at the Irish Repertory Theatre through Dec. 12.

“A Girl is a Half-formed Thing,” a one-act play starring Jenn Murray, remembers the story of a girl and young woman from small-town Ireland, who on appearance is the very portrait of an ordinary person, but behind closed doors is a jarring, far cry from fine.

Almost mannequin-like in manner, the Girl dictates how, in the advent of her absent father, she was raised to have it altogether: devout Catholic, star pupil, darling daughter, invalid-brother’s keeper. Clean, pristine. But after a sudden encounter of sexual abuse with her uncle occurs, all hell breaks loose in this 13-year-old’s life, leading her on a crusade of sexual masochism and inner shame until she drowns under the pressure of lost identity, and an unfinished life.

The play transfixes on themes of domestic trauma, particularly of parental abandonment, birth defects, cancer, family death, sexual abuse and rape. The language is piercing, abrupt and assailing, and with monologues of often blood-curdling, graphic, and explicit description, this play is not for the faint of heart, or anything else. It’s not a play for the impotent-minded.

With writing of dramatic precision—purposeful and fully-fledged—the play is marred by a feeling of incompletion. Girl’s words rapidly splinter and fly apart as quickly as Jenn Murray can speak them, as rationality loses meaning in this girl’s world. Thoughts and characters come and go without beginning or end. Plot resumes and cycles, but never resolves.

Discords in gender dynamics and religion lay fallow in this drama. In her monologue “I met a man...,” a dizzying list of her past lovers, spat out in flayed and jostled sentences she’d begin but never finish, men come but don’t remain.  In another scene which the Girl recalls a memory of being chastised by her grandfather about praying, and is unable to fully recite “Hail Mary”—mother of God—she is literally without a prayer. When father figures and Christianity turns for her from a halo to a crown of thorns, she fills that spiritual void with lust and malice; words once blessings become curses.

Of our “Girl,” performed by Jenn Murray, there is no downplaying that here she is at the height of her theatrical element to the point of being imperceptibly effortless. In a role that evoked Billie Whitelaw’s “Not I,” Murray redefines the scream of inward dismantlement. Her pace and devastating emotional range of character whipped at such breakneck speed it’s enough to give you the spins; but for those who can keep up, it’s the ride of your life. Intensity comes lashing from Murray with impeccable versatility. She is a master actor, and she brings to the stage among the most disciplined performances seen in New York today.

The tragedy of this story is that, for those who live with trauma, life may go on, but we do not. The plot may progress, and time moves on, but not the Girl. Ideas and sense-of-self may begin, or half-begin, but never conclude. She will always be half-made. Her first-person words are always left unfulfilled: her “I,” interrupted.

That is, unless there is a place to heal, and be heard. Within this stone, subterranean cell (ingeniously designed by Chen-Wei Liao) that felt symbolic of the innermost depth of the soul, Murray’s performance might have achieved that. As shattered light (by Michael O’Connor) ripped through the walls like tears or broken glass of a broken girl, an unseen peace shined through, of shedding light on abuse. From her submerged suffering, in what also seems to the eye as a Christ-like tomb, one felt this beautifully-confessional play, which gave this Girl anybody to talk to, hope to absolve her of the sins of living, release from the purgatory of trauma, and a resurrection: perhaps a second act.

A girl may be a half-formed thing, but with this play, may we be fully forgiven.