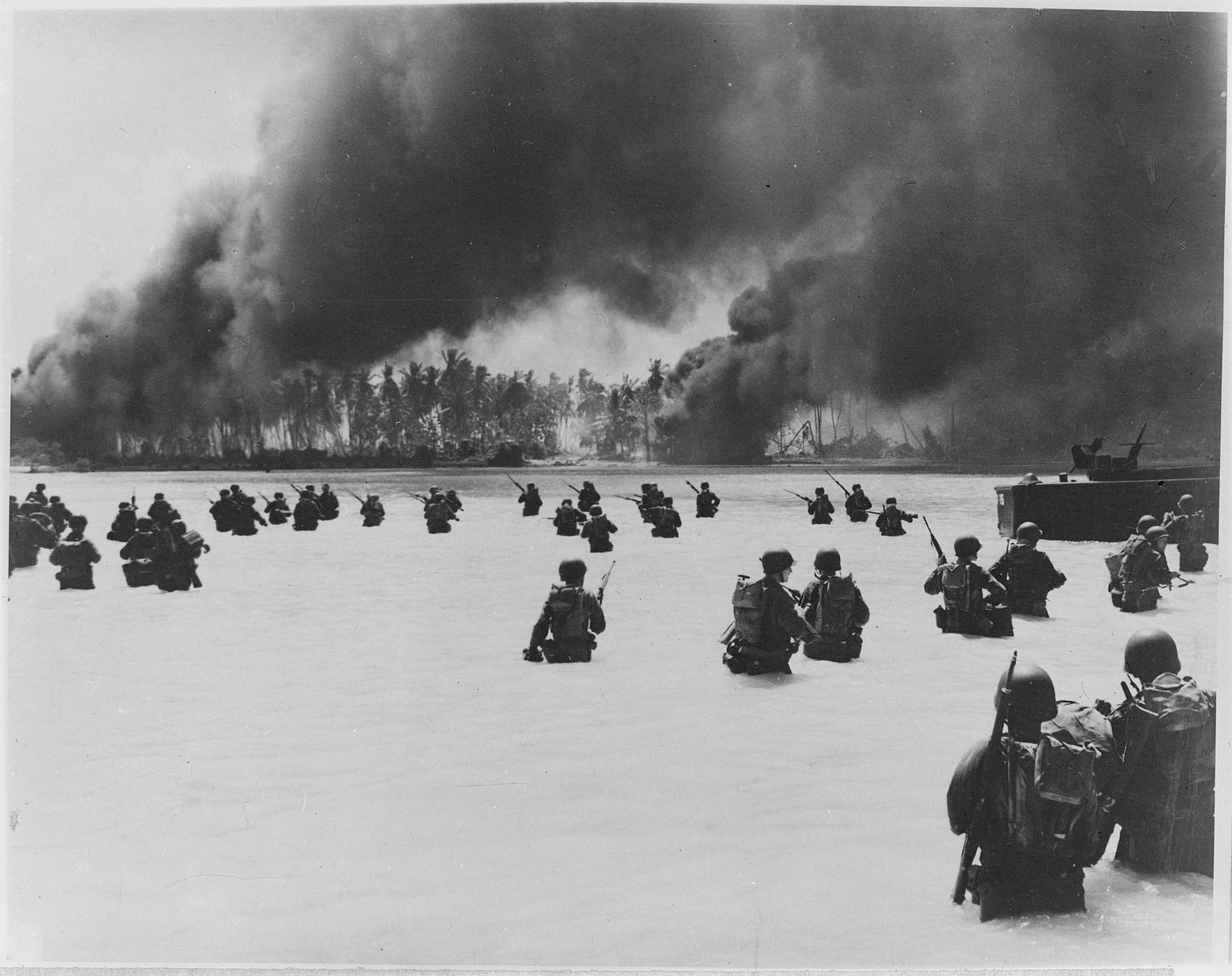 Soldiers of the 165th Infantry during the Battle of Makin Island. Fr. Lawrence Lynch transferred to the 165th, informally the Fighting 69th, in the early months of 1945, not long before its involvement in the Battle of Okinawa.

It was one of many dangerous situations chaplain Fr. Lawrence Lynch faced in the Pacific Theater during World War II. The transport ship “Elihu Thompson” had been hit by a mine and was sinking. Lt. Col Julius Klein and Lynch approached the sinking ship in a small boat. Lynch then jumped onto the sinking vessel to administer last rights to some of the dying soldiers. One of those soldiers was a Jewish boy named Jacob. Fr Lynch came to Jacob’s side, took both his hands in his own, holding them firmly,  and the Jewish boy smiled as Lynch’s firm, vibrant, reverent voice intoned: "Yisgadal v'yiskadash sh'may rabbo, Volmo di v'ro chiroasay.”

Lt. Col. Klein, descendant of a rabbinical family, listened wide-eyed, oblivious to the tears running down his cheek. Hearing Lynch recite the entire great Hebrew prayer, Klein silently watched the priest close the staring eyes and cover the young face with a blanket.

Stunned, Klein turned to Lynch and said, You're a Catholic priest and that was Hebrew! I could understand if he'd been a Protestant, but . . .”

"I'm a chaplain, Colonel Julius," Lynch interrupted. "My first duty is to be prepared and able to administer to the men I serve, regardless of creed, particularly when, as now, I happen to be the only chaplain present.” "That . , . that's not what I mean, said Klein. "You knew the prayer. You knew all of it. Why even many rabbis couldn't . . . couldn't recite it like that . . . from memory."

Lynch replied, "As a missionary, I was taught many things among them the Hebrew ritual. Now, excuse me, please. There are others waiting." He tried to turn, but Klein stopped him, a hand on his arm. "God bless you, Rabbi Lynch," he said. "You've done a good job this day. That boy . . . his mother will bless you."

That moment cemented a close friendship between Klein and Lynch. Klein, who would later write a book about the chaplain, said of Lynch, “It never mattered to him whether a soul was white or black, Jew or Christian, or unbeliever. To him, each human being was simply a child of God.”
The incident on the sinking ship was only an extraordinary moment in the life of an extraordinary priest. Lynch first saw the light of day in 1906 and grew up a tough Irish-American kid in the vicinity of Woodhaven, a section called City Line on the Brooklyn/Queens border. He was the eldest of 12 children raised by a mother from County Cavan.  Lynch,  whose father was a New York City firefighter, navigated the area’s tough streets, while also serving as an altar boy at Saint Sylvester’s. He decided to enter the Redemptorist order in 1932 and before the attack on Pearl Harbor, Lynch enlisted in the army as a chaplain.

In December 1943, he was sent overseas to New Caledonia in the Southwest Pacific, where he quickly became popular with the soldiers, telling them  that he was from Brooklyn and that he was God’s gift to the United States Army. Lynch would eat with them, drink beers with them, smoke cigars with them, listen to their problems, yet all the while, striving to bring them closer to God.

The men greatly respected Lynch, nicknaming him Father Cyclone because he was a whirlwind of activity. Part of the respect he earned was due to his ability to use his fists.  Hearing that another officer had mocked the “magic” that went on in the confessional, Lynch confronted the other officer, asking him if he had made this remark. When the officer admitted insulting confession, Fr. Lynch proceeded to floor him with a right to the jaw.

Lynch learned that  the Fighting 69th, formally known as the 165th regiment, was now stationed on Espiritu Sanctu and was looking for a replacement Catholic chaplain. Although he had grown very fond of the men on New Caledonia, Lynch wanted to serve closer to the combat. Over the objections of his friend Klein, he applied for a transfer, which was accepted. The 69th would soon hit the beaches of Okinawa, a battle, which would be one of the bloodiest in the Pacific.  Prior to departure, Fr. Lynch made sure every Catholic in the Division went to Confession and received Communion.

The 69th landed on Okinawa on April 9, 1945, and were assigned a bloody task, seizing Machinato Airfield. During the battle for the airfield, Lynch was constantly on the front lines with the troops. He  would also show up at headquarters each evening to lean which battalion would have the heaviest of the fighting the next day.  The next day, he would give that battalion absolutions, help the wounded, and administer Last Rites to the dying. The final night of his life, he learned that the third battalion would be making the attack the following morning. When he arrived, he was told by the battalion commander not to leave the command post because the Japanese were shelling them.  Hearing the scream of a wounded soldier, Lynch jumped out of the bunker, ran to the soldier host in hand, and leaning over the dying man said, “Corpus Domini nostri Jesu Christi custo.” They were Lynch’s final words as both men were killed by a mortar round. Fr. Lawrence Edward Lynch was 38 years old.

In June, after the American victory on Okinawa, more than 4,000 servicemen attended a Mass at his graveside. Many of the men visited Lynch’s mother after they returned home to express their admiration for the chaplain. Lynch was posthumously awarded the Silver Star and his body was later exhumed and buried in the Redemptorist Cemetery, Mount Saint Alphonsus, Esopus, New York. A triangle at Atlantic Avenue and Rockaway Boulevard, near where Lynch grew up was dedicated in his honor following a large parade on Oct. 8, 1949. On March 9, 2019, the triangle was rededicated in a ceremony with members of the Lynch family and community leaders from Woodhaven in attendance.