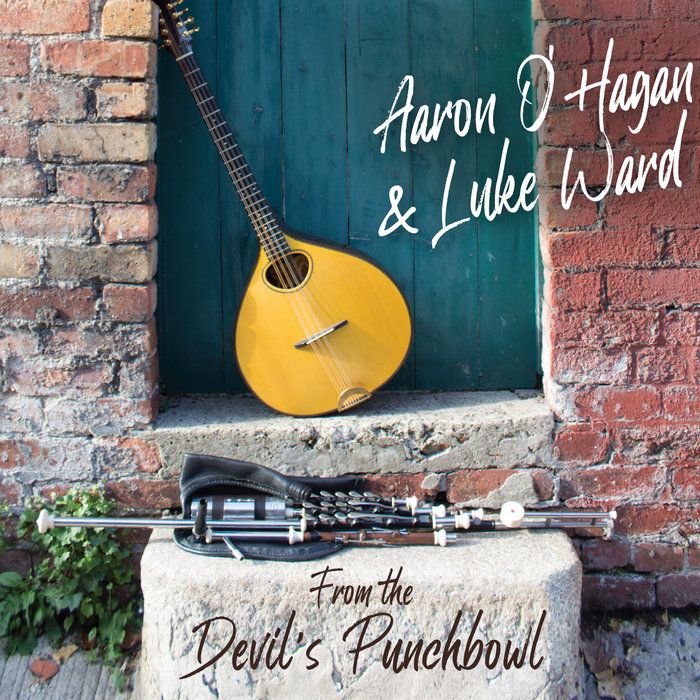 Happy end of the year, folks!  Don’t know about you, but it’s been a long one and I’m looking forward to a bunch of things, not least of which is a fuller return to live music.  It’s out there, just beyond the horizon!  Hope everyone reading this has been keeping well and had an enjoyable holiday season.

In the player this week is “From the Devil’s Punchbowl,” the lovely new album from a couple of musicians in the North, Aaron O’Hagan and Luke Ward.  It features 10 tracks of instrumental dance music that is is played with an easy drive and an attention to detail that given it nice depth.  It’s a bit of a cracker anyway and worth having a listen to.

From Antrim, O’Hagan (www.aaronohagan.com) is an uilleann piper and flute player who was once a member of the band Réalta.  Ward (bouzoukilukey.com), who lives in Belfast, is a bouzouki player (he plays a variety of other things on the album, including bass and percussion) who gets around a good bit and became first known through his work with button accordionist Martin Tourish.  Both are very strong players.

This is the duo’s first album together and they describe it as a “lockdown project,” workshopped together from afar when there were no gigs and travel was restricted.  It was completed during one of the flow periods, readied for release, and launched just in time for another variant surge.  But no bother – this is the sort of album that should generate some excitement for the group’s potential and have good legs.

The music here feels very “whole,” as you would hope a duo album would – the players clearly sound like they’re thinking on the same wavelength, and the arranging they’ve done is smart – there’s good action between the instruments that lead to interesting tensions and satisfying resolutions.  Generally, the album features O’Hagan and Ward on their own, but there are a few guests who make fairly limited (but not insignificant) appearances.  These include Melanie Houton (fiddle), Robbie Walsh (Bodhran), Cillian King (keyboards), Dermot Sheedy (percussion).

Every track has something nice about it.  “The Colliers / …” sets the album’s energy and is an excellent start – it shows that theirs is music that moves.  From the get-go, O’Hagan presents as a very fine piper, with great control over the instrument and with Ward’s stellar backing, it’s clear they're a formidable pair.

The stately interplay between the flute and bouzouki on “The Princess Royal” is superb.  O’Hagan’s playing here is elegant but not delicate, and once again Ward’s bouzouki playing is a perfect foil to the nuance.

Ward sets a catchy groove on reel track “The Miller of Drohan / …” in which O’Hagan lays down the melody in an attractive way.  Halfway through, Ward quickens the tempo, shifting the groove in a way that brings the track more focus.  The way the arrangement negotiates the change is very nice and attractive to the ear.

I particularly like “Lliberon / …,” a track that begins with a tune from Asturias.  It’s got a different sort of rhythmic dip to it (they way they play it brings Lúnasa to mind) and they follow it up with a couple of more familiar reels.  Very nicely played.

One of the album’s loveliest tunes is Ward’s lullaby “Moonlight Over Muckross.”  It’s a beautiful track inspired by the scenery of southern Donegal, its arrangement bringing to ming a thoughtful light rock influence by going heavy on the bouzouki with a bass guitar and trap drum for contrast.  Stylistically it diverges from the rest of the album, but is quite enjoyable and adds interesting contrast to the jigs and reels.

Players take note: O’Hagan is an uilleann pipes and flute maker, and all the instruments on this album are his creation. O’Hagan has been making instruments for several years now and has developed an excellent reputation.  His instruments all sound superb – it will be interesting to see how this recording enhances his instrument making business, as the quality here will surely give it a push.

“From the Devil’s Punchbowl” is a taught, well-rendered album of traditional music played with a modern sensibility.  Folks that love the traditional feel will thoroughly enjoy this one – give it a listen!  To learn more and to purchase, visit bouzoukilukey.bandcamp.com.