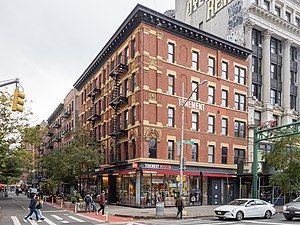 Are the Irish of New York being relegated from a prime place in the historical narrative by an institution dedicated to the accurate telling of history?

Questions are being raised by planned actions of the Tenement Museum in Manhattan's Lower Eastside where the story of 19th immigrant New Yorkers is presented to their descendants, as well as visitors from all over the world.

And the main question, at least from the perspective of the Ancient Order of Hibernians, is whether an Irish story is being reduced, or even airbrushed, out of the historical record that the museum holds in trust and being replaced by an African American one.

The alleged watering down has prompted a number of reports on both sides of the Atlantic.

And the Hibernians, who came into being in the 1830s, an early days tenement time, have reacted to the reports by raising their own questions.

One of them can be summed up thus: Is history clear cut and stark, or is it a series of hybrid stories that avoid the narrative of particular racial, ethnic and religious groups?

The Hibernians seem to fear that in the case of current planned changes in the program at the Tenement Museum it is a case of the latter.

Said the AOH in a statement: "The Ancient Order of Hibernians, the largest Irish American Organization in the United States, has written to Dr. Ann Polland, the President of New York's Tenement Museum, concerning published reports that the museum plans to reduce its current programming on Irish immigrants.

"The Tenement Museum was established to tell the history of immigration through the lives of successive families who lived in the buildings that the museum now occupies. The museum currently documents the lives of Irish, Eastern European Jewish, and Italian Americans who lived in the museum's building throughout the late 19th and early 20th century. The museum is to be commended for this unique concept which makes a very personal connection to history.

"However, multiple news sources have reported that the Tenement Museum has decided to now include programming focused on the story of an African American family even though it is not in keeping with the museum concept as the family were neither immigrants nor residents of the building.

"To accommodate this story, the current Irish programing, 'Irish Outsiders,' focused on the prejudices that Irish Americans faced in the age of Thomas Nast and 'No Irish Need Apply' is to be replaced with a 'hybrid story' of the Irish and African American families leveraging the coincidence that the families shared the same name and lived in New York at the same time.

"While the AOH respects and supports telling the stories of all heritages, it should not be a zero-sum game where telling the story of one heritage comes at the price of eliminating another.

"The history of anti-Irish Catholic bigotry in the U.S. is little told; the Museum proposal to eliminate it in favor of a 'hybrid program' only furthers the trend of airbrushing it from American history. The AOH cannot help but be concerned that the 'compare and contrast format of a 'hybrid program' engenders, intentionally or not, a spirit of competition between the two stories. Finally, the Hibernians ask why the Irish story alone is being compromised to make room for other stories?

"Making spaces for other stories at the Tenement Museum while evicting the story of the Irish is not progress and contrary to the spirit of diversity which the museum is claiming motivates this change. The museum's strategy of pitting the story of one heritage against another is a recipe for enmity, which is the last thing we need in these divisive times.

"It would indeed be sadly ironic that the telling of the story of the 19th-century history of 'No Irish Need Apply' at the Tenement museum should fall victim to a 21st-century incarnation."

The museum, on its website, outlines its view of changes in the works and refers to a story on its new plans carried in the New York Times.

It states: "Over the last several months, we’ve been thrilled to share with the public that in late 2022 we’ll be adding a new exhibit to one of our two historic tenement buildings, telling the story of Joseph and Rachel Moore, a real Black family who lived in Lower Manhattan in the mid-19th century.

"Our mission has always been to tell as many stories of tenement residents as possible. This new story won’t be replacing any of our other tours, and all our current exhibits, about the stories of Jewish, Italian, German, Irish, Puerto Rican, and Chinese New Yorkers will remain as we expand to include the story of Joseph and Rachel Moore. We’ll continue sharing the fullness of Irish American stories through the lives of Joseph and Bridget Moore, Irish immigrants who experienced the possibilities and struggles of life in New York.

"As with so many of our exhibits, the idea for our new tour emerged from a particular document, the 1869 city directory, that listed the Irish Joseph Moore at 97 Orchard Street, right next to a Joseph Moore of 17 Laurens Street, who is listed with a racial designation that showed he was a Black New Yorker.

"They are both waiters, with the same name, living blocks apart in Lower Manhattan. The presence of these two men together on this document led to questions from visitors and conversations on tours about how their experiences as Irish and Black New Yorkers would be connected.

"Working-class Black New Yorkers’ and Irish immigrants’ lives were constantly overlapping in the 19th Century as they often lived in the same neighborhoods. They formed communities and households, shared streets and buildings, and experienced joys and tensions. By learning about their experiences, we’ll explore how their stories help us understand the importance of the 1860s, and how their stories help us understand the present.

"The stories of real people are complicated, just like history is, and by researching and sharing these histories in the same museum, we enhance both stories, and will be telling a fuller, more complete history of the city and country."

Back in the days of New York's City's immigrant tenements the story was of multiple ethnic and racial groups living cheek by jowl and jostling, sometimes fighting, for their place in the sun.

In one sense, it would appear, that story hasn't been fully put to rest.