Home A tale of two cities, both New York 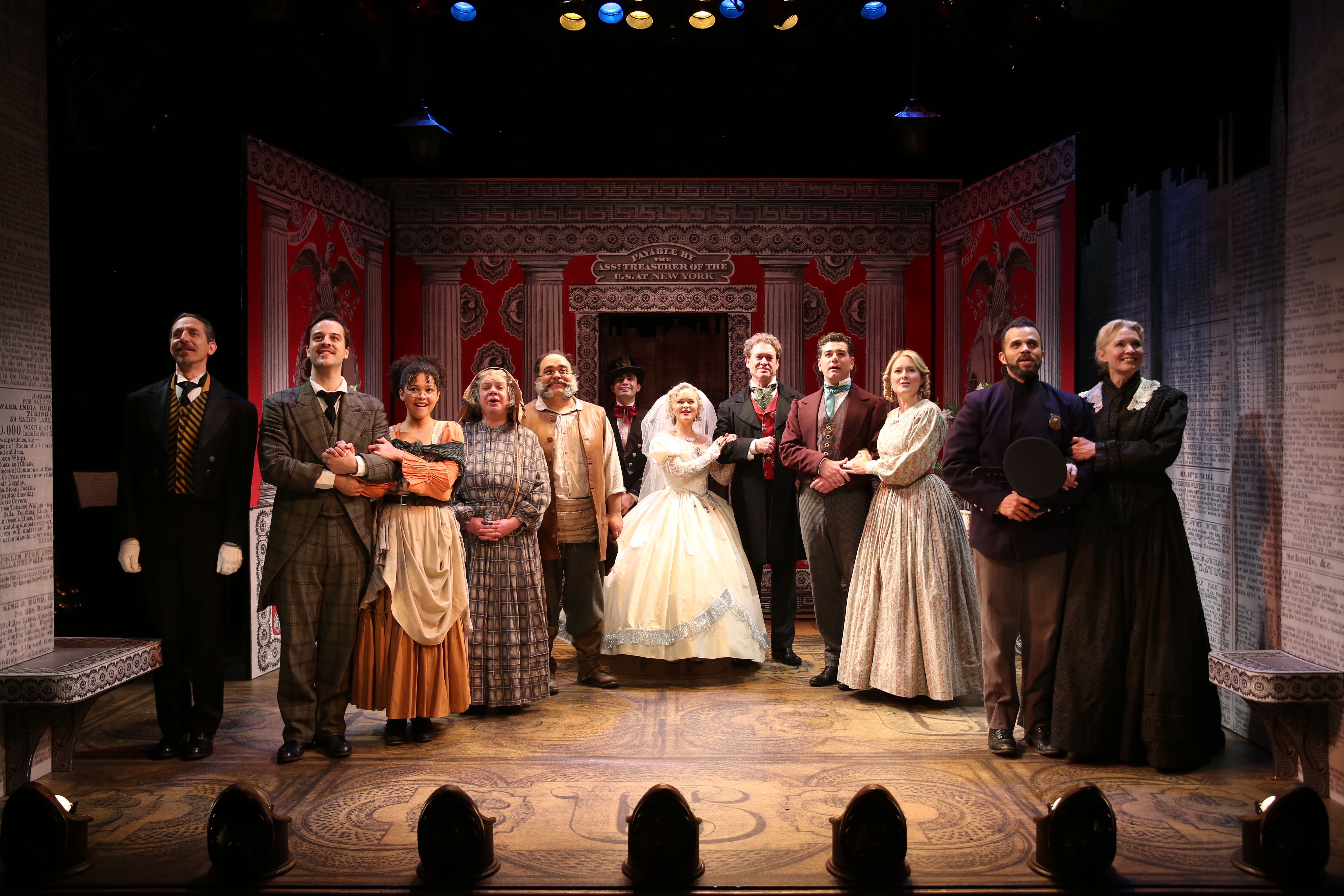 The cast of "The Streets of New York." PHOTO BY CAROL ROSEGG

A tale of two cities, both New York

The times may change, but the streets of New York remain the same for the Irish Repertory Theatre’s holiday production of “The Streets of New York,” a musical adaption of Dion Boucicault’s play, on the Francis J. Greenburger Mainstage through Jan. 30. Earnest and heartfelt, this 1857 work, adapted, musically arranged and directed by Charlotte Moore, presents audiences with a bittersweet, feel-good fairytale of New York, that lavishes theatrics and story as much of a bygone era, as they were true and as old as time.

The musical chronicles the 20-year-long tale of two (New York) cities, and of the eternal feud between the Haves and Have-Nots. On the one side is the Bloodgood family—heartless Wall Street baron Gideon (David Hess) and conniving socialite daughter Alida (Amanda Jane Cooper)—who capitalize upon and exploit the misfortunes of others; and on the other, the modest, downtrodden Fairweather family, along with their friends, the prodigal son-hero Mark Livingstone (Ben Jacoby), and merry band of roustabouts the Puffys, a family of bakers and wenches who dole out chestnuts and good cheer.

When tragedy strikes the Fairweathers amid the Panic of 1837, financial hardship and desperation becomes real, forcing them from their comfortable life into the slums of the then-insidious Bowery. Spurred by the love for daughter Lucy Fairweather (DeLaney Westfall), penniless and ruined tycoon Mark Livingstone will do what he must, even make a heartbreaking bargain, to save the Fairweather family from their drastic, shameful fate. Morality comes perilously close to bending for all involved, as the ruthless Bloodgoods turn the screw on their demise.

With heightened verse and well-primped petticoats, where redemption reigns, conscience endures, and goodwill, one reasonably hope, wins out in the end, “The Streets of New York” is equal parts Shakespearean and Dickensian, with a sprinkle of showboating.

There’s a trope for every occasion, something that this musical flagrantly plays to the nines, and to great fun for all. It has its stock villains, its not-so-stock villain/good guy Brendan Badger (Justin Keyes), its leading lovers, its ragtag ensemble, and of course, the overlooked but never underrated butler (Price Waldman).

Half-musical and half-living-history, the show has the quality to historically inform as it has to entertain, and the performers’ continuous choices to turn and engage the audience throughout the plot are both useful and crucial in pulling patrons back in time through Boucicault’s vision of New York.

In essence, the show feels like a musical lover’s melodrama, a “best-of” period play, whose romantic influences Moore quilted together for the ubiquitous Boucicault. In a Broadway-studded cast, this classic musical could not have been better attuned to its own style.

With Sweeney Todd-ish vamps in the opener “The Streets of New York,” the Oliver Twist-ed propensity for begging, the Éponine-like air of Dixie Puffy (Jordan Tyson) and Paul Fairweather’s (Ryan Vona) irresistibly cute “He Doesn’t Know I’m Alive,” and the Livingstone-Lucy duet “Where is Spring?” which might be sung by Marius and Cosette of Les Miz (if we momentarily forget where we are), this musical has an ounce of  misery from the Victor Hugo epic, and bushels of Moore’s camp, pomp and romp.

The music for “The Streets of New York,” written by Moore, is uncannily clever, with acrobatics of rhyme, rhythm and wit that would make Sondheim smile from heaven.

The performances of Moore’s music are every bit as divine. Amanda Jane Cooper’s wickedly good performance as Alida is a show-stealer, particularly her solo “Oh How I Love Being Rich ”—her satirically overwrought riff of unrestrained brattiness— which is such a hysterical caricature, that it might probably be accurate to its real-life counterpart.

Keyes gives an especially robust performance as well, in the role of Badger, to which he brings an intelligence and complicated sympathy that draws magnetic adulations.

Perhaps memorable of all were the duets by Ben Jacoby and DeLaney Westfall as Mark Livingston and Lucy Fairweather, whom, every time, sing with such exquisite honesty, it makes the heart tremble with a sincerity often lost on the stage in these times. Not a morsel of talent is wasted in each moment of these performers.

Not every song needs to deck the halls of this musical. Act two’s melodic silly walk “A Taste of the Good Life,” sung by jolly trio of vagabonds the Puffys, seemed to serve no purpose other than that it was so darn sweet. The tap duet “Villains” with Bloodgood and Badger, and token tango “Bad Boys,” a sultry spectacle between Alida and lover The Duke (Daniel J. Maldonado) appears to rise out of nowhere, aside from that they are fabulously done, and fabulous things tend to happen in the theatre. Perhaps Boucicault would have welcomed such whimsical theatrics more than this ambivalent audience.

Through a tantalizing, picture book-like scenery (designed by Hugh Landwehr), split at times between the black-and-white of newsprint and money, and a Madison Avenue mansion ablaze with red, we are reminded that Boucicault’s “streets of New York” was a real world, seen through the rose-colored sentimentality of his passion.

Yet this musical begs of us the serious question to imagine the reality of poverty: will you “take your brother’s hand”? Whether audiences can truly understand the plight of the poor in today’s New York through this antebellum melodrama, or if this is a limitation of Boucicault’s time and genre, is up for debate. What is sure is that this production wants you to try, and means it, and takes it close to your heart.

Rich in dignity, wonderfully invested, “The Streets of New York” is a benevolent drama that folds up like a receipt you can take straight to the bank. Choose your banker wisely.