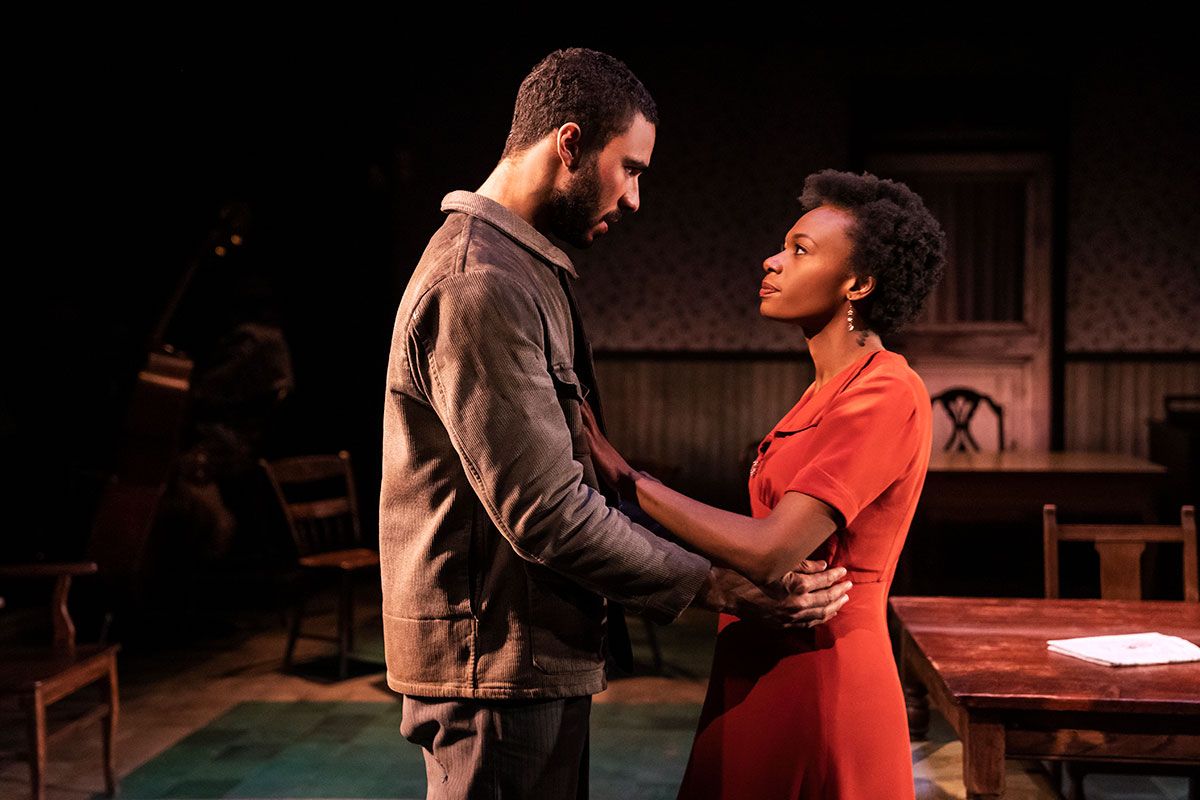 Austin Scott and Kimber Elayne Sprawl in “Girl from the North Country.”

As a lifelong disciple of Bob Dylan, the thought of hearing his lyrics belted out from the footlights and kitsch of Broadway appeared to be, in all its apprehension and skepticism, an unimaginable thing. To mention it alone—a Bob Dylan musical—sounds like the last straw in a world flung wild into the contradictions and chaos of our dissonant, modern times.

And yet to know the lyrical wonder of Dylan is to accept this score on these terms: life is a defiance of logic and expectation, at every turn, without any explanation, in all its reckless sorrow, and maybe a hint of floozy jazz. And so when it comes to be that you’re told he’s made a musical, named “Girl From the North Country,” written and directed by Conor McPherson, and it’s reopening now at the Belasco Theatre, you go. You get your ticket, you ride that train, and hear what it has to say.

Nothing was more glorious than walking through open theatre doors again, and seated around an ornate mezzanine and a softly-lit homely stage. Such was the mood of the night for audience and performers alike: genuine, unpretentious, if not a tick awkward, as masked ushers beckon “Welcome back to Broadway!” to our recapitulating cheers of triumph.

“Girl From the North Country,” set in in 1934 in Duluth, Minn. (where Dylan was born in 1941), traces the lives of guesthouse owners Nick Laine and mentally-infirmed wife Elizabeth, children Gene and Marianne, and a swath of characters suffering scandal and hardships, each in their way struggling to make meaning of their incoherent little lives.

The storyline delves exquisitely into the imperfections of individuals, and the social pressures that inflict and reflect upon the choices we make. With thematic subjects ranging from religion, racial prejudice, mental illness, sexual promiscuity and moral relativity, this musical has a cross to bear for everyone.

This musical is a dueling banjos of sorts between two maestros, Dylan and McPherson, who, each with an ear to the ground of human nature, brought forth an opus of complete convolution against conventions.

It is also a tale of two musicals, as it is somewhat lopsided between the first and second acts. The first act, an apparent jukebox musical headed straight for the rocks, takes us right to the precipice of phony, before turning everything topsy-turvy. With abrupt dialogue that interrupted the audience’s every insistence on applauding after songs, and tongue-in-cheek lines, as when conman/faux-preacher Reverend Marlowe says “The devil pursues me, and it’s called commerce!” one felt the cracking bullwhip of Dylan’s snide subversion, snapping and cackling at society. His spirit belonged to act one, and coursed through its vein like a mysterious river.

The second act was undoubtedly McPherson’s domain. Centered upon a scene of eerie festivity that recalled “The Weir,” the act danced between medleys and shattering, heart-stopping, life-affirming monologues that rang true with such emotional purity. The book for this musical ought to be remembered, and lauded, among McPherson’s finest words.

While the ensemble was divinely cast and performed to the nines, a few players stood above the show, exceptionally. Austin Scott, in the role of Joe Scott, a fugitive boxer falsely convicted of crime, skyrocketed through the show like a comet of righteousness, in voice and action, symbolized our yearning for redemption and justice in every way.

The star of the night, however, as many would agree, was Mare Winningham. Her performance as Elizabeth, the holy and hellish voice of reason, epitomized the “Jokerman,” the immortal fool of the world. Her enchanting performance was something emblematic of all humanity; careening with lucidity and lunacy, flailing about with a beautiful and bittersweet abandon. Her unforgettable monologue about the end of love before singing her final “Forever Young” would reduce you to rubble, even to remember.

The music, an arrangement of Dylan’s blues and gospel, used at times both hypocritically and poignantly, was performed perfectly by this cast. It is undeniable that his songs have never been sung more sweetly, most notably by Jeannette Bayardelle, and if the audience adored or invoked nothing else from the show, it’s the voices, which were damned salvation. Whether this made his music more approachable or not, it certainly has given it a revelatory meaning for a new audience.

With an instinctive standing ovation, even from me, “Girl from the North Country” is branded a sign of the times: nonsensical, visceral and uniting. Its clarion call is “more energy and less morals” --- or so it would seem. This musical is about to be bellowed from far and wide. Ring them bells.