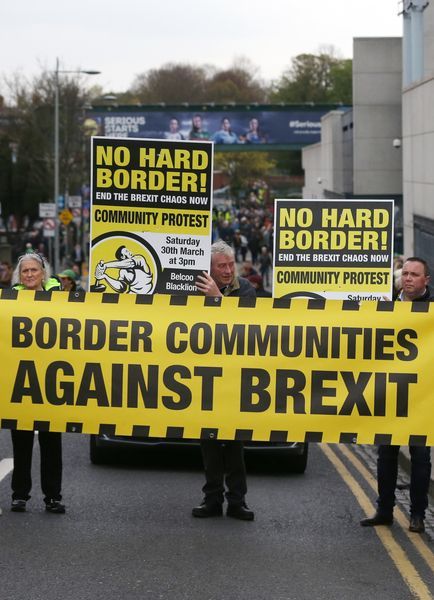 Border Communities Against Brexit is looking to the U.S. and EU for support.

The campaign group Border Communities Against Brexit says that in the coming week "we expect that the British Government will invoke Article 16 as their top unelected bureaucrat Lord Frost is determined to create a huge confrontation with the EU to satisfy Hard Line Tory MP’s."

"Recent economic data has also shown how positively the Protocol is in protecting business on the Island of Ireland, with an increase of 61%, (by €947 million to €2.5 Billion) in trade from North to South. It is this positivity and success of the Protocol that the Brexiteers hate, and highlights the absurdity of Brexit to the UK Government in the first place.

"Indeed, business in the Border region of Ireland are thriving currently, with business moving from South to North to avail of the market access under the Protocol, whilst many, many businesses are expanding and cannot recruit enough staff.

"However, let's remind ourselves of one of the vital reasons for the Protocol in the first place. There are 3.9 million vehicle crossings across our invisible border each month, approximately 47 million vehicles per year; it’s for this reason and many others that a Border in the Irish Sea meant everyone on this Island could go about their daily life utterly unhindered, just as we did before Brexit.

"This utterly reckless attack upon the Protocol is an attack on every person living on the Island of Ireland, and an attack on the Good Friday Agreement.

"Just like the Good Friday Agreement the Protocol is a compromise. This compromise removes rights from Irish Citizens who are EU Citizens living in the North, for example taking away our right to representation in the European Parliament, it removes us from the full complement of EU Structural Funds, removes us from the Common Agricultural Policy, removes us from Common Fisheries, and denies us access to the Single Market for Services amongst other things.

"We fully support the Protocol, as we recognise the need for compromise in a community that still requires mutual understanding and Peace building. But compromise and living up to agreements and International Treaties is something totally alien to this rogue Tory Government.

"They have cosied up to and taken millions from mega wealthy Russians; Tory sleaze is back in the headlines again, so breaking International law and lying at every turn comes as second nature to them.

"So, in the event that Article 16 is invoked we are asking that the EU and the United States take a very firm and solid stance against this Rogue British Government.

"We are asking that strong, robust and effective trade measures be put in place to make this British Government understand that breaking the Irish Protocol will have long and far-reaching consequences.

"For example, a tariff on all UK made cars and trucks of 30 – 40%, and restrictions on the Financial Services industry selling into the EU be very seriously considered as an early first measure.

"This type of action is very unfortunate, however, the EU and the United States must stand firmly with the people of Ireland and especially with those of us living in the Border Communities."