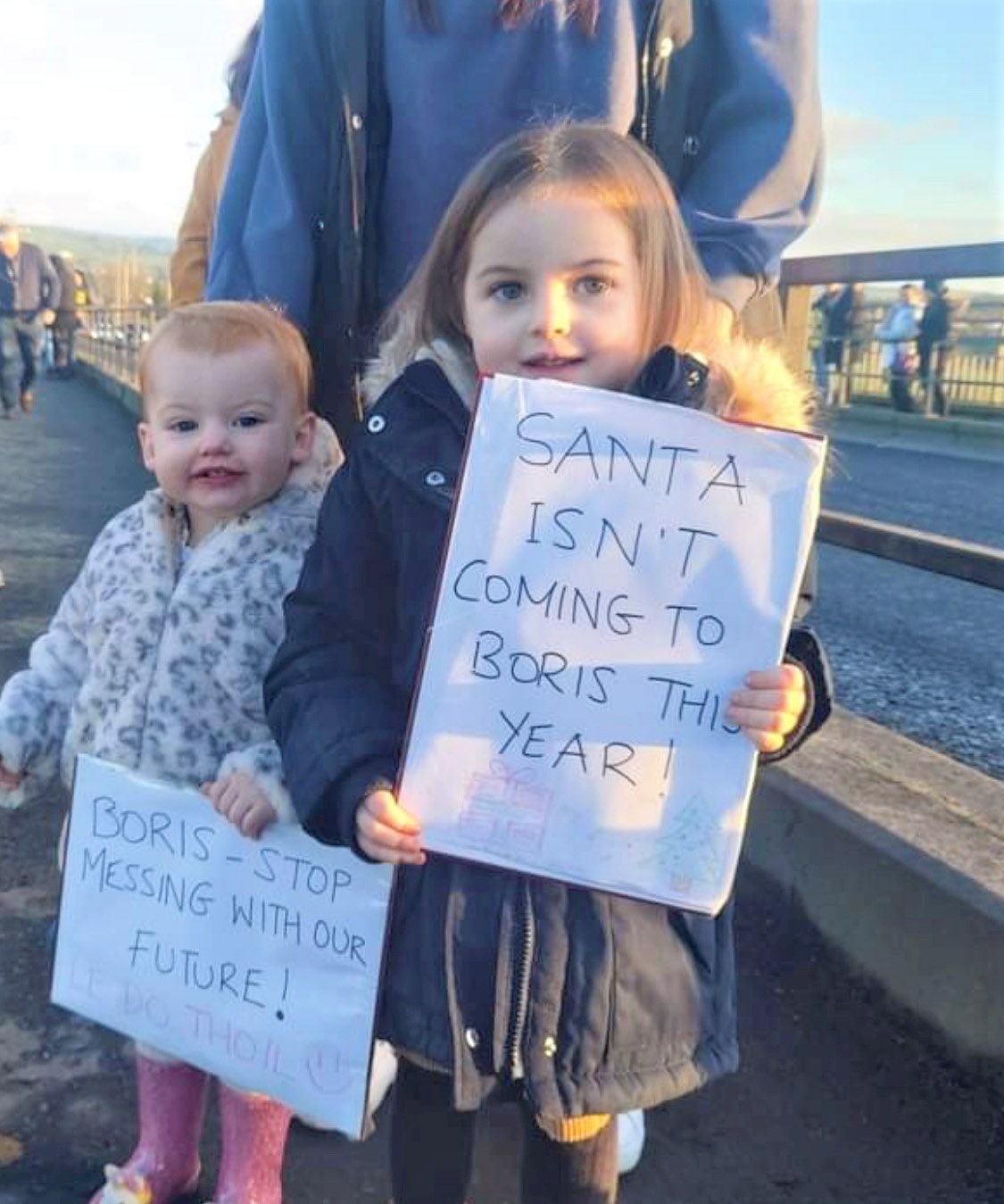 The future is theirs. But what kind of future?

In a powerful video message 12,000 Ulster Gaels are appealing to our fellow Gaels in Munster, Leinster and Connaught to sign and endorse a letter to An Taoiseach Micheál Martin asking the Irish government to take the lead in planning for Irish Unity by establishing an All-Island Citizens Assembly “reflecting the views of citizens North and South to achieve maximum consensus on a way forward” toward an “agreed shared Ireland.”

Conversations are taking place across society regarding what shape our island will take in the coming period. They are also happening at every level amongst the GAA community #gaelsletter @RTEGAA @RTEsport pic.twitter.com/XbbezesIfi

The letter states in part: “It is the responsibility of the Irish government to ensure that the democratic rights of all citizens are respected and protected, regardless of where they live on the island … “ The letter to Micheál Martin was an idea that first emerged in Antrim earlier this year. Since then it has spread across the nine counties of Ulster and has gathered over 12,000 signatures.

The campaign has also gained substantial support in the other three provinces. Down’s double All-Ireland winner Ross Carr said that he has been overwhelmed by support since he started seeking support for the campaign. He said: “I asked people from all walks of life – doctors, barristers, former players, administrators, ordinary supporters – and it was incredible the amount of support for this initiative.”

Paul Gibbons, who coaches Cremartin Shamrocks GAA in Monaghan, is one of those behind the efforts in that county to secure more signatures for this initiative. He told his local paper, the Northern Standard: “The purpose of the letter is to highlight the growing conversation taking place in communities the length and breadth of our island about the future constitutional direction of this island and to provide a platform for Gaels throughout the county to engage in that conversation.”

He added: “Our letter articulates three main asks of the Irish government – to take the lead in the planning for a future border poll and start the planning for the future re-unification of this island; to establish a Citizen’s Assembly and to protect the rights of all citizens.” Thus far, An Taoiseach Micheál Martin has refused to comment on the initiative, or respond to the letter which he first received in May. But as it says in the video – Ní neart go cur le chéile.

There is strength in unity. Pádraig Hampsey is captain of the All Ireland Champions Tyrone. He has appealed to fellow Gaels to join in this effort, and to sign up to the letter at: www.gaelslettertotaoiseach.ie If you have a minute click on to #gaelsletter and watch the amazing video of GAA greats asking you for your help and support in building a better future for all of our people.

Comhgairdheas to the many hundreds of people who took part in a series of protests against Brexit along the border last Saturday. The Border Communities Against Brexit campaign group has been very effective in raising awareness around the threat to the Good Friday Agreement, to the economy of the island of Ireland, and especially to the border communities, all posed by Brexit.

Saturday’s event at Carrickcarnon had activists dressed in customs officers clothes and a recreation of the old customs huts that used to sit along the border corridor. But beyond the theatrics the message was clear and vitally important.

"Protect the Protocol’"and "Back off Boris" were the two main themes for the five protests that took place at Carrickcarnon; Belcoo/Blacklion; Aughnacloy; Lifford Bridge and Bridgend, Derry. The message from all of the speakers was the same.

Firstly, a warning to Boris Johnson not to trigger Article 16. Secondly, a demand that every effort must be made by the European union and the Irish government to defend the Protocol and the Good Friday Agreement.

Colin Harvey, who is professor of Human Rights Law at Queen’s University told the crowd: “The Protocol mitigates the damage that the British Brexiteers want to impose on this island … what is scandalous is the lack of discussion about the opportunities that the Protocol provides for all the people of the North.”

The chair of BCAB, Damian McGenity, reminded those at the protest that the majority of citizens in the North voted to remain in the EU and that a majority of their political representatives support the Protocol. He pointed too to the benefits of the Protocol. Evidence of this emerged last week in the latest statistics on trade from the Central Statistics Office in Dublin which showed that the value and amount of trade between the North and the South has increased dramatically.

Trade South to North has jumped by €835m (£706m) to €2,577m (£2,178m). In addition, the advantage for the North of having open access to the EU and to the British market has seen several important new job announcements. Ardagh Metal Packaging announced its intention to invest $200 million and create 170 jobs in a new beverage can plant near Belfast.

The pharmaceuticals group, Almac, also announced that it is going to create 1,000 jobs over the next three years. Meanwhile, in the British parliament, the DUP’s Ian Paisley engaged in the kind of hyperbole unionist leaders seeking to frighten and intimidate their supporters have used for generations.

According to Paisley, the Protocol is being used by Brussels to “destroy this part of the United Kingdom by insisting on the enforcement of a protocol in a disgraceful manner." And he demanded that the Johnson government "Invoke Article 16 and invoke it now, and stop dillydallying on this issue. Put business out of the misery in Northern Ireland." This kind of doomsday rhetoric has no basis in fact.

On the contrary, triggering Article 16 would open up the real likelihood of a trade war between the British government and the EU with the North caught in the middle. According to a report in the Financial Times many businesses in the north are “filled with dread at the prospect of yet more disruption and uncertainty if Article 16 was triggered.”

BCAB is leading the way in challenging the British government, the DUP and others who have chosen to ignore the democratic vote of the people. Last week, Sinn Féin hosted over 180 business representatives to discuss the economic opportunities created by the Protocol and the potential for greater investment and more jobs arising from Irish Unity. They and we are looking to a better future, a more prosperous future. God speed the day.

The Proclamation of 1916 states that the Republic guarantees … “equal rights and equal opportunities to all its citizens, and declares its resolve to pursue the happiness and prosperity of the whole nation … cherishing all the children of the nation equally …”

It doesn’t say except for those who have a disability, or are sick, or who have mental health issues, or who need an operation. Recent statistics reveal that over 900,000 people in the South are on a hospital waiting list.

At the current rate the number will soon top one million. In the North, a report last month noted that 348,867 people are waiting for a first consultant appointment – an increase of almost 40,000 over last year.

There are lots of reasons for these appalling stats. Mostly it’s as a result of under-investment and under capacity within the health systems and in the South by decisions taken by successive Fianna Fáil and Fine Gael governments.

In the last 20 years, since Micheál Martin was Minister for Health in 2000, there have been eight Health Ministers from these two parties. All have promised an end to the crisis in the health service. They have all failed. When I was a TD in Louth I learned very quickly that every winter Our Lady of Lourdes hospital in Drogheda was going to come under huge pressure.

In the North, the crisis in the Health Service is exacerbated by the fact that the purse strings are held by London and the Tories have been hell bent on privatization for years. So too is the FF/FG coalition in Dublin. Covid has added to this very real crisis in our two health services, one result of which is that patients urgently needing treatment for life threatening illnesses such as cancer are waiting longer than advisable for appointments and treatment.

The answer in the short term at this time in our history is for as much all-island cooperation and coordination as practicable to make best use of available limited resources. In the longer term we need an Irish National Health Service that is free at the point of access and is sufficiently funded to meet the health needs of citizens.

This isn’t pie in the sky. This is a realizable, achievable objective. It just needs political will.