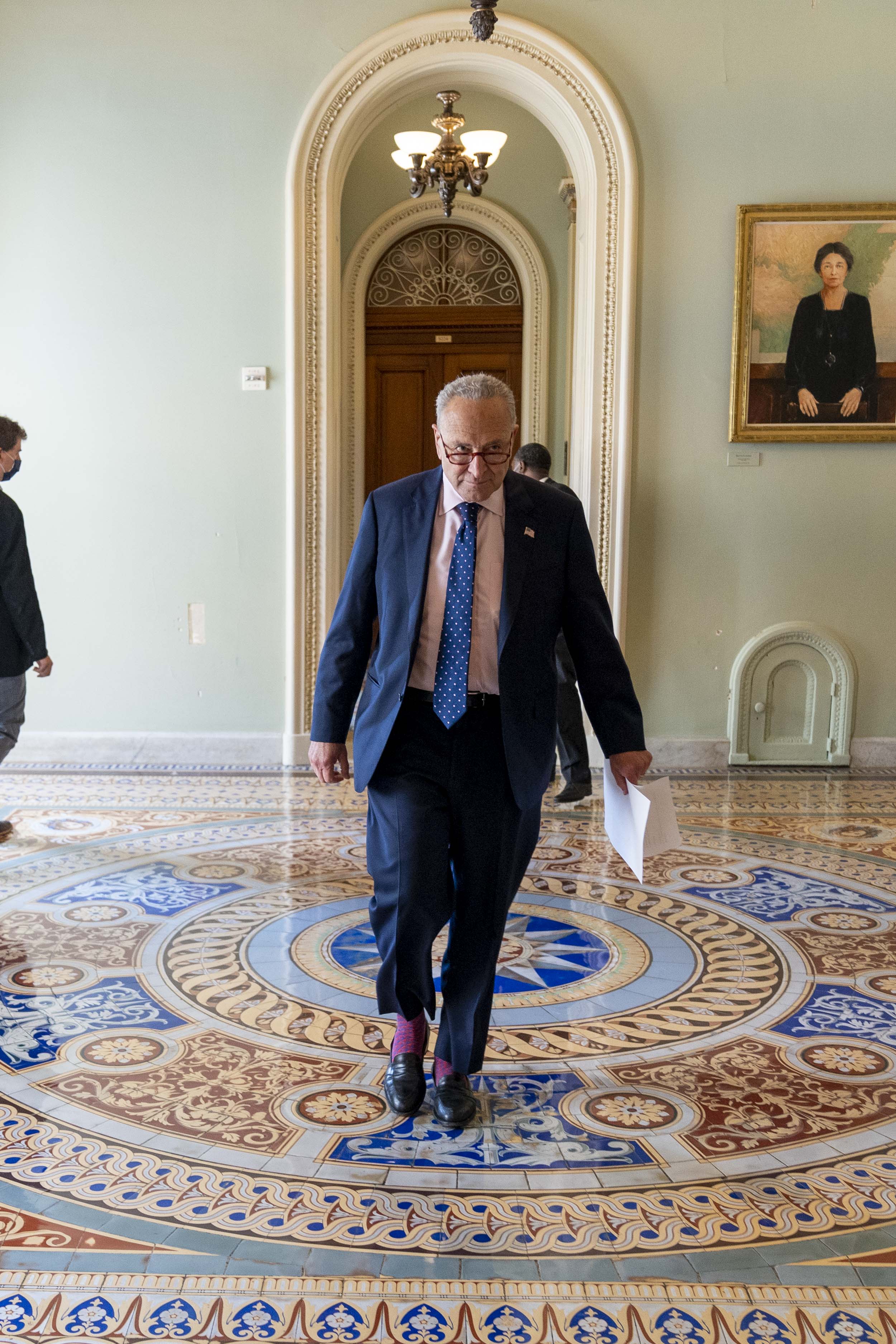 As was the case at the G7 summit in Cornwall, Boris Johnson's dreams of heightened global relevance for Britain were brought back down to earth a peg last week during his visit to the U.S. for the opening of the United General Assembly, and for a sit down meeting with President Joe Biden at the White House in Washington.

As before, the specific piece of earth that Johnson landed on was Northern Ireland. As much as Johnson wanted to talk about Global Britain there was yet the North, which some for sure inhabitants describe as British, but which is not part of Great Britain at all, but rather the United Kingdom. The White House, in a statement that came across as diplomatic but firm, said after the Johnson/Biden meeting that the two had discussed Northern Ireland and that President Biden had "reiterated his longstanding support for a secure and prosperous Northern Ireland in which all communities have a voice and enjoy the gains of the hard-won peace."

Senate Majority Leader Charles Schumer also met with Johnson and, his words rather more pointed, subsequently tweeted: “I was pleased to meet with UK Prime Minister @BorisJohnson today and join @SenatorMenendez making clear the Good Friday Accord, Stormont Agreement, and Northern Ireland Protocol must not be undermined. Any potential US-UK trade deal depends on maintaining progress on these fronts."

I was pleased to meet with UK Prime Minister @BorisJohnson today and join @SenatorMenendez making clear the Good Friday Accord, Stormont Agreement, and Northern Ireland Protocol must not be undermined

Any potential US-UK trade deal depends on maintaining progress on these fronts https://t.co/ytP93dvJkV

Johnson heard much the same thing from Congressman Richard Neal, chairman of the House Ways and Means Committee, which is effectively a sluice gate through which any trade deal must pass.  The Mass Live website detected an urgent background to the meeting stating "U.S. Rep. Richard E. Neal, D-Springfield, met with British Prime Minister Boris Johnson Wednesday amid fears over potential changes in the relationship between Northern Ireland and the Republic of Ireland. "Johnson has raised concerns in some quarters by warning that the United Kingdom might trigger Article 16 — the override mechanism that suspends parts of the Northern Ireland Protocol, the section of Britain’s 2019 European Union withdrawal agreement, or 'Brexit,' that covers regional trade."

According to Mass Live, Neal said he had a lengthy discussion with Johnson on a range of issues, including a possible revision to the Northern Ireland Protocol. “As chairman of the House Committee on Ways and Means, I shared my strong belief that any agreement reached between the UK and the EU on the future of the Protocol must not undermine the integrity of the Good Friday Agreement nor threaten the institutions it created.“

Neal said. “Having worked with five British Prime Ministers throughout the peace process, I reminded Prime Minister Johnson that everyone had to make sacrifices to achieve this historic accord, and that twenty three years later it remains a template for successful conflict resolution around the globe.” "The congressman said Johnson assured him there would be no return to a hard border on the Irish island and that the British government remains committed to the full implementation of the 1998 peace deal.

The Irish Times, meanwhile, reported that Neal had dismissed a UK proposal to join a North American trade pact cannot be entertained until the EU-UK dispute over the Northern Ireland Brexit agreement is resolved, a top US Democrat has said. Reported the Times: "Congressman Richard Neal, the chairman of an influential US congressional committee that approves the country’s trade agreements, said the row over the Northern Ireland Protocol must be resolved, offering no threat to the Belfast Agreement, before the UK government’s proposal to join the trade pact between the US, Mexico and Canada could be considered.

"The British government this week proposed joining the USMCA, the trade deal signed by former president Donald Trump with Mexico and Canada last year following the renegotiation of the Nafta trade deal, after hopes for a bilateral trade agreement between the US and the UK receded." Neal told the Dublin-published daily: “The point here is not so much the trade agreement , because I think that most of us believe that a trade agreement of some sort with the UK would be desirable, but I think until the issue of the Protocol and Brexit are resolved, offering no threat to the success of the Good Friday Agreement, I don’t see how they can be entertained.

The report added that Neal was  “a bit surprised” that the UK “might be interested in joining a hemispheric trade agreement rather than a bilateral. He said that it marked a “change in strategy” by the British. The proposal presented “a bit of a new wrinkle." The idea, it turned out, was raised by the British during a recent visit to London by House Speaker Nancy Pelosi.  Added the Times report: "Mr. Neal said that Mr. Johnson did not raise the UK proposal in their meeting.

During their meeting, Mr. Neal said that the British prime minister “seemed to blame the European Union for the impasse over the Protocol.” On top of this a British minister, prior to Johnson's visit, had publicly suggested that President Biden didn't get Northern Ireland and all the issues surrounding it, most especially the Protocol.

This prompted Taoiseach Micheál Martin, also in New York for the UN General Assembly opening, to respond by saying there was a clear line of communication between Ireland and the Biden administration on Brexit and “they take it seriously because obviously successive U.S. governments have invested significantly in the peace process."

Mr. Martin added: “Anybody who suggests that President Biden doesn’t get Northern Ireland or understand it is wrong. He understands it very well.” Mr. Johnson, as it turned out, said in Washington that he disagreed with his colleague's assertion adding that President Biden had not raised the issue of the protocol during their meeting at the White House. “I don’t think it came up at all. We had a meeting of over 90 minutes and it wasn’t raised,” Johnson said.

As for President Biden, he told reporters that said he felt “very strongly” about the Protocol and about the Belfast Agreement. “We spent an enormous amount of time and effort, the United States, it was a major bipartisan effort. And I would not at all like to see – nor, I might add, would many of my Republican colleagues like to see – a change in the Irish accords, the end result having a closed border in Ireland,” Biden said.

Taking a broad view of it all, Congressman Neal said he was delighted President Biden voiced support for the Northern Ireland Protocol, presumably when talking to those reporters, and the Belfast Agreement when he met Mr. Johnson. “As we now approach twenty three years in on the Good Friday Agreement, we should be celebrating its achievement, not jeopardizing it,” Neal said.