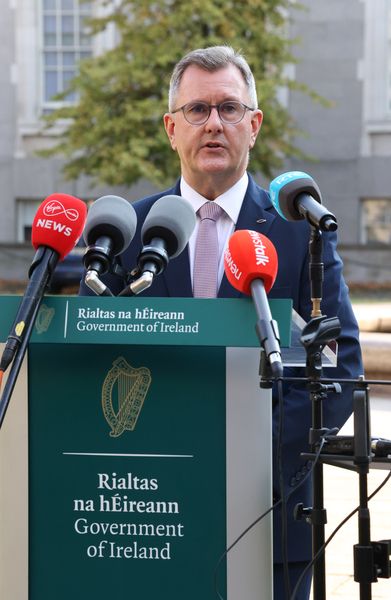 Last week Communities Minister in the North Deirdre Hargey and the Republic’s Minister for the Gaeltacht Jack Chambers were forced to abandon their planned meeting on languages due to the non-attendance of DUP junior minister Gary Middleton. Also last week the DUP’s Agriculture Minister Edwin Poots failed to attend a north-south meeting along with his SDLP ministerial colleague Nichola Mallon.

The DUP’s non-attendance of North-South meetings is part of the party’s protest against the Northern Ireland Protocol.

Ms Hargey said the DUP cannot “hamper Government business on behalf of the public we all serve and represent”.

“Since there must be cross-community representation from the Executive at meetings of the NSMC, the criteria was not met due to the inaction of Gary Middleton to participate and since the Executive did not nominate a replacement unionist Minister. So regrettably the meeting was cancelled shortly after it was due to begin this morning.

“I consider this inaction by Minister Gary Middleton and the Executive Office to be a serious failure to comply with the law and the Ministerial Code which require Ministers to participate in meetings of the NSMC.

“Therefore, I am seeking legal advice on challenging the DUP inaction through the courts.

“We must be clear that when the political institutions were restored through the New Decade, New Approach agreement last January, it was all of the institutions, not some.”

DUP leader Jeffrey Donaldson said he wants “respectful north-south relations” but added that the Protocol is “the roadblock”.

“Our Ministers have put a stop to the North-South structures because we need to bring the Irish Sea border to a head. We cannot have a border between us and Great Britain but continue with north-south structures as though there is no problem.

“The Protocol has harmed Northern Ireland’s place in the Union, and is driving up consumer costs and driving down consumer choice.”