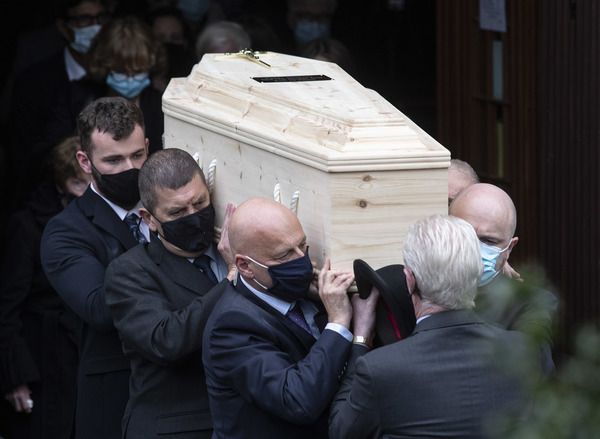 The setting for the final farewell was as beautiful as much of the music Moloney gifted to the world since the founding of The Chieftains almost sixty years ago.

According to a report in the Irish Times, President Michael D Higgins and his wife Sabina were among those present in the little church at the top of a steep hill, with children from Scoil Chaoimhín Naofa national school providing a guard of honour as the funeral hearse made its way to the church.

Current and former Chieftains Matt Molloy, Seán Keane and Michael Tubridy provided the music for the funeral mass from the altar. They were joined by uilleann piper Gay McKeown, the Galician piper Carlos Núñez and the fiddle player Tara Howley.

A portrait of Mr. Moloney as a schoolboy holding a trophy he won for playing music was placed on the altar along with the uilleann pipes that made him world-renowned just as he made this most complex of instruments famous. A tin whistle was also placed on the altar.

Parish priest Fr. Eamonn Crossan said Mr. Moloney was of “Donnycarney, Annamoe and Carnegie Hall” along with many other places around the world.

Aonghus Moloney said that his father had lived for his time on stage, when he would walk on stage and announce that he was “Paddy Moloney from Dublin, Ireland, the greatest city in the world."

Above all else he was devoted to his wife, Rita. Theirs was a 60-year love affair. His father loved doing what he did and when the Covid-19 pandemic happened in March 2020, it took away from him the thing he loved doing the most: playing music for other people, his son concluded.

Tributes came in from all over the world: Mick Jagger tweeted: “Sad to hear of Paddy Moloney’s passing – the greatest uilleann piper on the planet.”

According to the times report the church was full to capacity and seats were arranged outside for the extra mourners. Among the traditional musicians who came to pay tribute to him were Louise Mulcahy, Noel Hill, Sean Óg Potts, Bernie Potts, Joe McKenna, Joe McHugh, Mark Redmond, Cobblestones pub owner and musician Tom Mulligan and his brother, the uilleann piper Néillidh Mulligan.

"The biggest audience, though, was online. Some 2,500 people watched the funeral service on YouTube live. In death, as in life, Paddy Moloney could still pull a crowd."