But not everybody in Louisville, Kentucky was thinking in terms of casting votes.

Nativist mobs spent the day storming through a number of immigrant neighborhoods, for the most part inhabited by Irish and German Catholics.

In the riots, at least 22 people were killed and dozens injured.

Some estimates of the death toll went far higher.

Rioters, determined to stop the new immigrant voters, rolled cannons up to the doors of one church, searched the Cathedral of the Assumption and St. Patrick’s Church for arms, and burned a row of buildings known as Quinn’s Row.

The horrific events of what became known as Bloody Monday are remembered annually, most especially by local members of the Ancient Order of Hibernians, whose very existence in the middle years of the 19th century was based on the defense of beleaguered Catholics.

On August 6, 1855, those defenses were overwhelmed.

The Bloody Monday riots – some would describe it as a pogrom - grew out of the bitter rivalry between the Democrats and the Nativist Know-Nothing Party, which actually went by the official name of The American Party.

And as the record shows, after all of the day’s horrors, only five people were to be indicted. But none of them were convicted and the victims were not compensated.

As the Louisville Daily Journal reported at the time, the city was"...in possession of an armed mob, the base passions of which were infuriated to the highest pitch by the incendiary appeals of the newspaper organ and the popular leaders of the Know Nothing party.”

And the report continued: “In the afternoon a general row occurred on Shelby Street, extending from Main to Broadway. Some fourteen or fifteen men were shot, including Officer Williams, Joe Selvage and others.

“Two or three were killed, and a number of houses, chiefly German coffee houses, broken into and pillaged. About 4 o'clock, a vast crowd armed with shotguns, muskets and rifles were proceeding to attack the new German parish of St. Martin of Tours on Shelby Street.

“Mayor Barbee, himself a Know-Nothing, dissuaded them with and the mob returned to the First Ward polls. An hour afterwards the large brewery on Jefferson Street, near the junction of Green, was set on fire. Rev. Karl Boeswald was fatally injured by a hail of flying Stones while on his way to visit a dying parishioner.

“Late in the afternoon three Irishmen going down Main Street, near Eleventh, were attacked, and one knocked down. Irish in the neighborhood responded by firing repeated volleys from the windows of their houses on Main street.

“Mr. Rodes, a river-man, was shot and killed by one in the upper story, and a Mr. Graham met with a similar fate. An Irishman who discharged a pistol at the back of a man's head was shot and then hung but survived.

“After dusk, a row of frame houses on Main Street between Tenth and Eleventh, the property of Mr. Quinn, a well known Irishman, were set on fire. The flames extended across the street and twelve buildings were destroyed.

“These houses were chiefly tenanted by Irish, and upon any of the tenants venturing out to escape the flames, they were immediately shot down. Those badly wounded by gun shot could not escape from the burning buildings.”

Louisville Mayor John Barbee, a Know-Nothing himself, was the man who managed to finally quell the violence.

It was his personal intervention that saved the Cathedral of the Assumption from destruction.

But the cathedral was more fortunate than a lot of other structures. More than a hundred businesses, private homes and tenements were destroyed.

Some estimates of the death toll exceeded a hundred souls.

In some cases it was impossible to identify individuals and it was determined that in some of the ruined structures entire families had perished.

Back in 2005, the 150th anniversary of the riots, the Louisville Ancient Order of Hibernians Fr. Abram J Ryan Division 1, and the city’s German-American Club, raised the funds to erect an historic marker at the site of Quinn's Row.

It is both a shrine and a reminder of the price to be paid for ignorance and hatred. 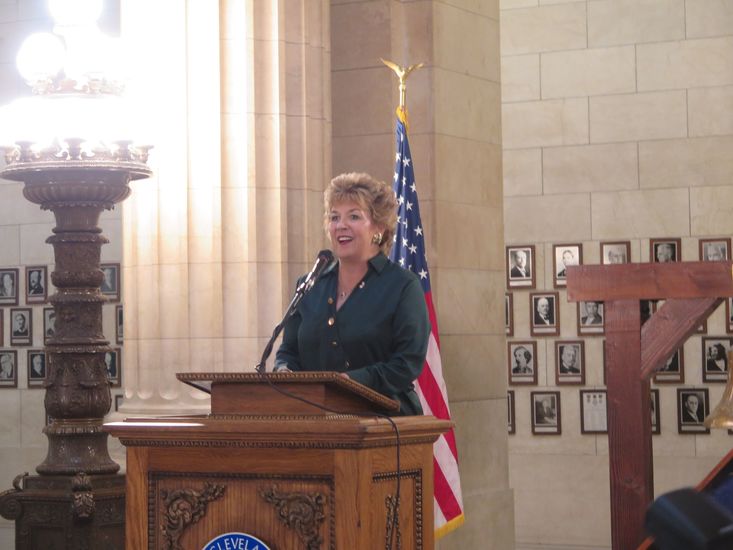