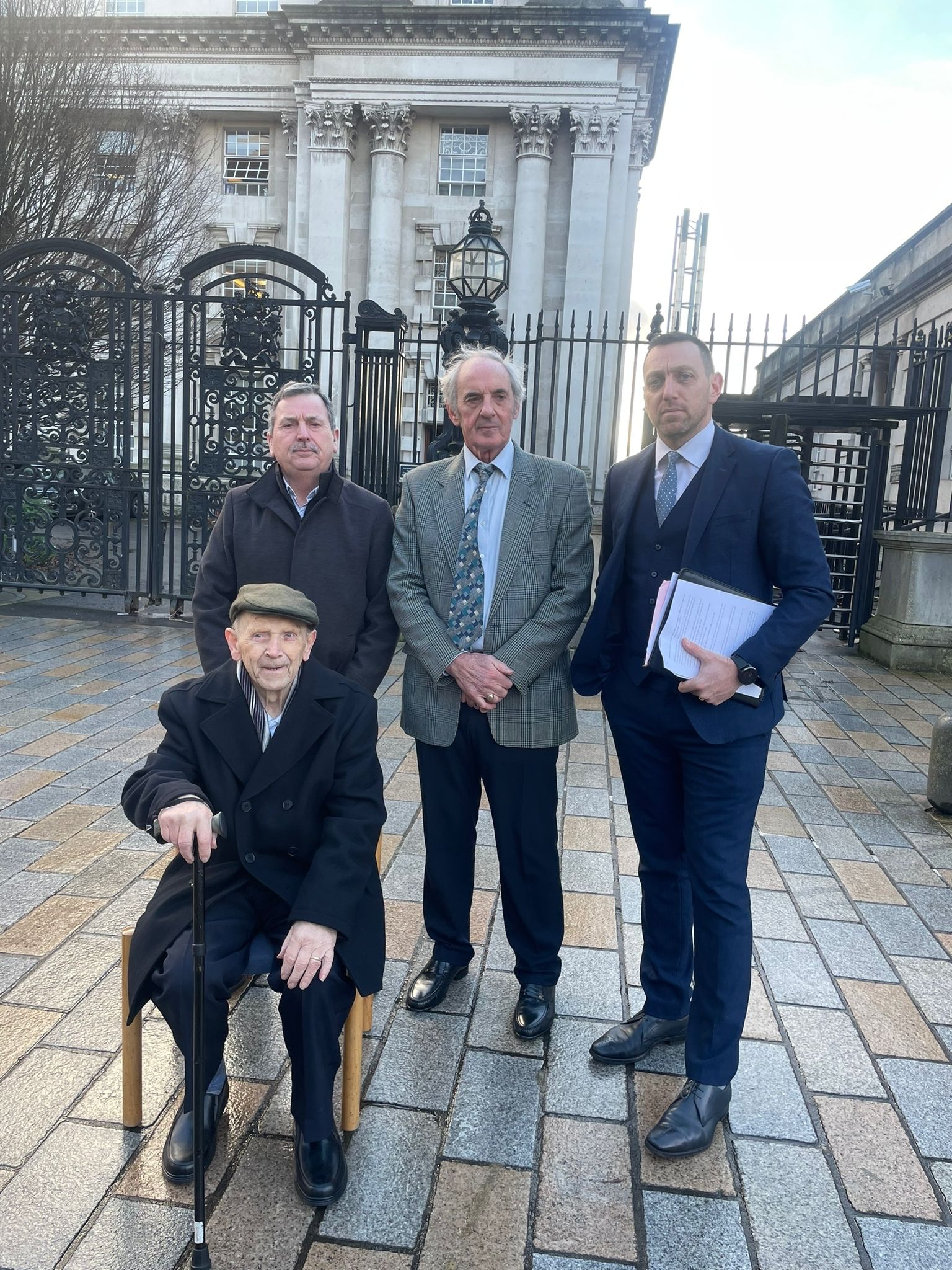 Pictured outside the High Court in Belfast are back row (l-r): John Teggart, whose father Danny Teggart was shot dead during the Ballymurphy Massacre; Joseph Millen, and solicitor Pádraig Ó Muirigh. Sitting is Bobby Clarke.

Civil cases brought against the British Ministry of Defence by two Belfast men shot and seriously injured during the Ballymurphy Massacre have reached a settlement.

Nine men and one woman were shot dead by the British Army’s Parachute Regiment over three days in August 1971. An eleventh victim died of a heart attack after being attacked by soldiers.

After the historic Ballymurphy inquest findings of May 11, 2021, civil proceedings were issued against the MoD and Chief Constable of the PSNI for damages and loss sustained by a number of individuals who were shot and injured.

At the High Court on Friday, January 13, Mr. Justice Humphreys was told that terms in the cases taken by Bobby Clarke and Joseph Millen had been agreed by both sides.

The settlements have been described as "significant."

The amounts paid out in each case were not disclosed in court, but the judge ordered the MoD to also pay legal costs.

Bobby Clarke (89) was shot and injured by British soldiers as he assisted his neighbors and children escaping an attack by a loyalist mob on homes at Springfield Park on August 9, 1971.

Joseph Millen was shot in the back and seriously injured near Springfield Park as he made his way home on that same day.

The men’s solicitor, Pádraig Ó Muirigh, said: “As a result of intense negotiations over the last number of weeks these legal actions, which had been listed for hearing before the High Court between 5-6 January 2023, have now been settled.

“The confidential nature of the settlement prevents me disclosing the settlement figure. I can confirm though that the figure is significant and that our clients are satisfied with the outcome of this litigation.”

Speaking after the High Court ruling, West Belfast MP Paul Maskey commended the families for their "steadfast and dignified" campaign.

“Today is more vindication for that campaign as the High Court ruled that two men brutally shot and wounded by British Army paratroopers will be compensated," he said.

"What happened in Ballymurphy was state murder and for decades the British government has covered it up. Now they want to slam the door in the face of these families and others killed by the state and their campaigns for truth and justice.

“The British Government’s cruel and callous legacy bill is an affront to human rights and must be opposed at every turn. Families have a right to truth and justice.

"British state forces cannot be above the law. The legacy mechanisms agreed at the Stormont House must be implemented in a human rights compliant manner."

A number of related legal actions by families of those killed at Ballymurphy reached a settlement in June 2022.