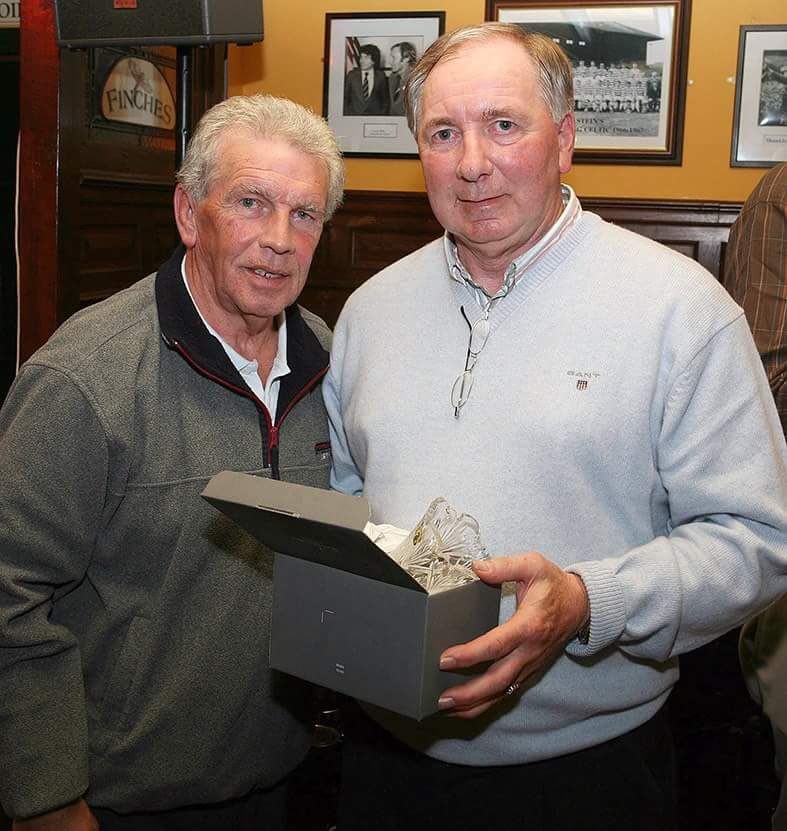 John Giles, left, pictured in an undated photo with Peter Thomas, a player he twice picked to play in the Irish goal. Photo: Waterford FC

Waterford FC and the city’s community are mourning Peter Thomas, “widely regarded as the best goalkeeper to grace the League of Ireland” and one of Irish soccer’s great personalities, who died yesterday. Thomas played 599 times for the club, won five league titles and an FAI Cup medal, and was capped by the Republic of Ireland.

Thomas, who was 78, died in Tramore, Co. Waterford, “surrounded by his loving family,” the club said Thursday.

The man who started out as a striker with Coventry City in England joined Waterford in 1967, the year after the club had won its first title of what would be six in eight seasons. Thomas was in goal for the 1967-68, 1968-69, 1969-70, 1971-72 and 1972-73 league title wins, and numerous other honors. The Blues didn’t have much FAI Cup luck in those years, losing one final to competition specialists Shamrock Rovers and another to Cork Hibernians. But Thomas, aka Tommo, was in goal when Waterford beat St. Patrick’s Athletic 1-0 in the 1980 final, for the second win in the club's history.

Thomas, born in Coventry on Nov. 20, 1944, became a naturalized Irish citizen and was picked by player-manager John Giles for two internationals, both friendlies. The first was a 1-0 win over Poland at Dalymount Park in October 1973, and the second a 2-1 defeat to reigning World champions Brazil in Rio De Janeiro in May 1974.

Tommo was famous for organizing his outfield teammates via verbal instructions throughout the course of a game and for assuming a virtual sweeper role, now more commonly used by goalies professionally. Selected as the Soccer Writers Personality of the Year in 1970, Thomas was picked by fans as the greatest ever League of Ireland goalkeeper in 2020.

The goalkeeper played in the United States for four summers in the 1970s, with the Washington Diplomats, the Utah Golden Spikers, the Las Vegas Quicksilvers and the Sacramento Gold, as well as with Galway United and Drogheda United in the 1980s before retiring at age 40. In 1988, Thomas was briefly manager of the renamed Waterford United (the club has since reverted to the original name), but left due to pressures of his business career.

For a short look back at his career, click here: