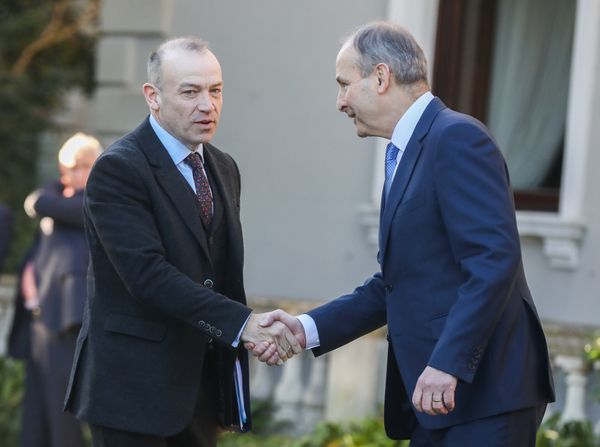 Pic of Day: Secretary of State for Northern Ireland Chris Heaton-Harris being greeted by Tánaiste Micheál Martin as he arrived at Farmleigh House, Dublin, last week ahead of the British-Irish Intergovernmental Conference. This week, Mr. Heaton-Harris is in the U.S. visiting Washington, D.C., New York and Boston. According to a British government statement the five day visit is "to drum up investment opportunities in Northern Ireland." This will be Mr. Heaton-Harris's first official U.S. trip. Added the statement: "The Secretary of State will also meet with range of key political, business and civic organisations including the State Department, the National Security Council, members of congress, business and trade organisations and councils and the Ad Hoc Committee to Protect the Good Friday Agreement – as part of routine US-UK engagement on Northern Ireland issues." RollingNews.ie photo.