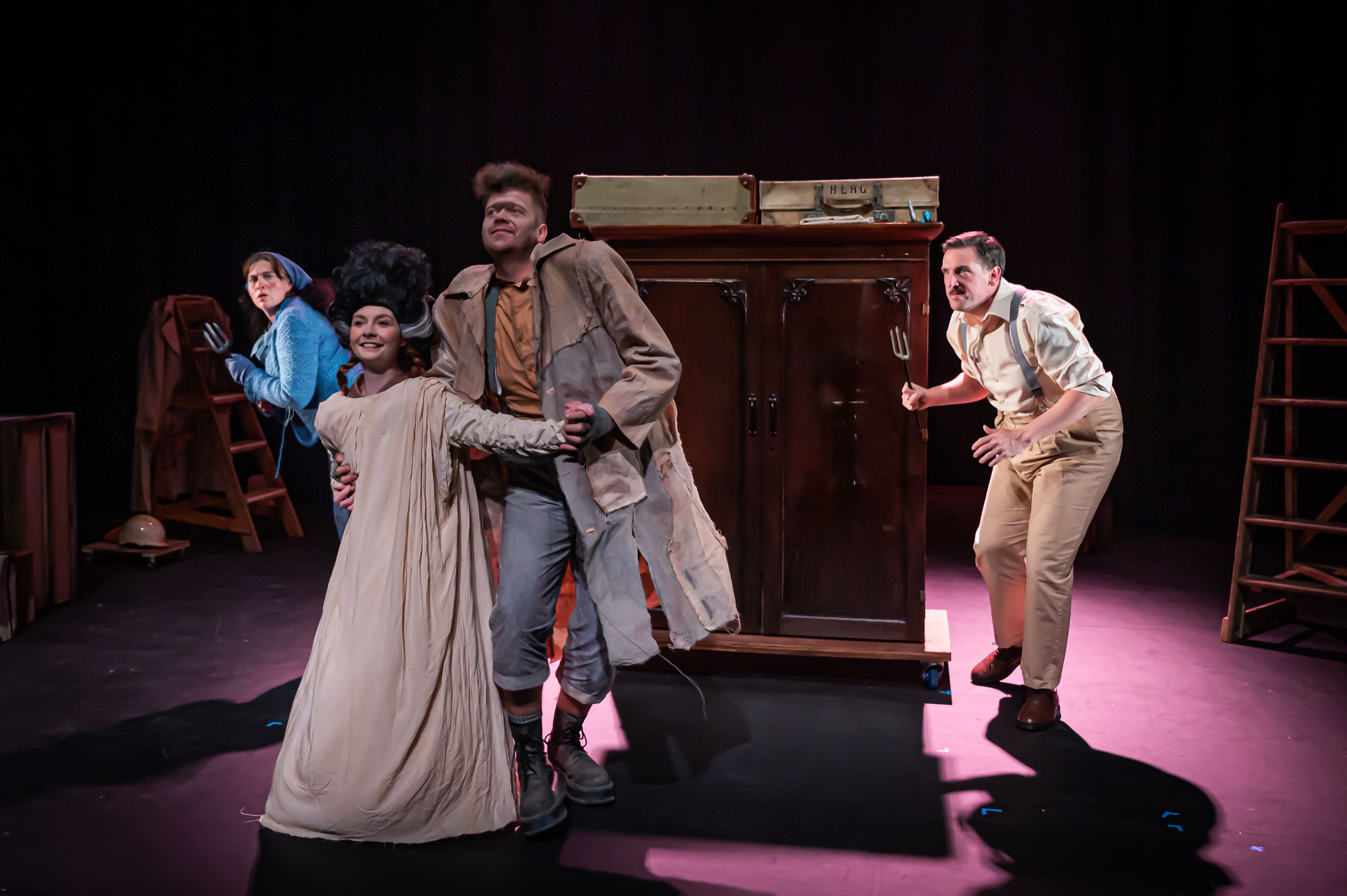 Nicky Harley, Vicky Allen, Rhodri Lewis and Chris Robinson in 59E59's 2023 production of “Frankenstein's Mother is Drunk and the Sheep Have All Jumped the Fences.” PHOTO BY NEIL HARRISON

As the Origin’s 1st Irish Festival draws near to another end, the thrilling spectacle of this year’s chilling season has been the sight of live theatre brought back to life. Of all the lively events, no production has hit the nail of this festival’s spirit so literally on its head than Belfast-based Big Telly Theatre Company’s “Frankenstein’s Monster is Drunk and the Sheep Have All Jumped The Fences,” written and directed by Zoë Seaton (adapted from Owen Booth’s short story), playing at 59E59 Theatres through Jan. 28.

An eerily existential silver-screen dream, “Frankenstein’s Monster is Drunk…” is an invention of hysterical, dramatic madness; the strewn appendages of absurdist romance and ad-lib, stitched together with a lucid homage to the phantoms of Hollywood’s golden age. Zany and surreal, this 60-minute swing puts a funny face to frightful infatuations and the morbid adoration of icons from the great beyond.

On a dark and stormy night—much like the many lashing downpours of recent evenings which theatregoers travailed—the play begins on a cold countryside in 1946, where provincial couple (Vicky Allen and Chris Robinson) happen upon the intact remains of a hideous humanoid embalmed by ice.

The resuscitated corpse turns out to have had a freshly deceased career in Hollywood to the magnitude of Boris Karloff, namely, the real Frankenstein’s Monster (Rhodri Lewis), and the spine-tingling surprise of all is: “It’s alive!”…to the chagrin of no one, of course. Against even further likelihoods and peculiarities, the village pariah (Nicky Harley) discovers a kindred companion in the Monster, they fall in love, and embark on a turbulent, yet realistically average marriage.

The production is monstrously fun to experience, and its style, a medusa of convention, is a playful patchwork of performance. While dictated by narration, the show is impishly immersive, as the actors are not bashful to cavort with the audience, who are at odd intervals invited to play a game of bingo or board an airplane, among the show’s off-kilter skits.

Among the production’s many amusements is the nod to the nostalgia of Hollywood, especially in Garth McConaghie’s sound design, deliberately reminiscent of “Foley effects,” to which actors mimed to seamless sound cues, which was inspiringly imaginative for the audience. Accompanied by a ritzy jingle by Irving Berlin, and even an impressive cameo from the apparition of Elsa Lanchester, the show shines with its own stardom and supernatural razzamatazz.

The set of “Frankenstein’s Monster is Drunk…,” a scenery of total potpourri arranged to the effect of what could be Max Ernst’s dressing room (designed by Ryan Dawson Laight) is among the best of the found-objects style, as the stage’s labyrinth of props, contraptions and gizmos, as well as a constantly revolving armoire in centre stage, brings an incessant inventiveness to the space.

As with other contemporary Irish theatre trends, this production incorporates elements of dance into the act, not merely as an allusion to the play’s vaguely expressionistic aesthetic, but as another mode of storytelling, a montage of physical dialogue (exceptionally conceived by Sarah Johnson’s choreography), which is exhilarating to see.

In performance, the ensemble of this production are giddily engrossing, with every actor of this cast possessing an innate flair for versatility that spars with the play’s rapid pace. As the Monster, Rhodri Lewis is the portrait of guileless pity—the smiling serenity of a life that’s none the wiser in spite of experience—with a paramount performance as Frankenstein’s Monster, in just the right amount of kitsch and originality. As the Monster’s Wife, Nicky Harley brings hilarity, cautious love and measured nurturing to the role of one who has none to nurture. In their numerable parts and as Narrators, Chris Robinson and Vicky Allen are the divining rods from whose comedic impeccability, physicality and creative elasticity this show comes to life.

With its unusually wry humor, “Frankenstein’s Monster is Drunk…” raises the mirth and misery of life in one, taking the saddest circumstances and making such seem apathetic, puzzling and funny all in the same, like seeing a horror movie monster drunk, stumblingly over uncounted sheep. A deftly metaphoric work, this production emanates with a sentiment that the deformities and blemishes of life, the mistakes we make, are the vital signs of a life meaningfully lived.

While not deliberate, the play is a bit of clever commentary on the “hiatus”; that artists can still lead meaningful lives, even after their careers have been put on ice.

Yet, with themes delving into the loss and withdrawal of life—infertility, miscarriage, and life’s untimely deaths—this play asks the questions that are universally eternal: What happens to a creator who can no longer create? What is the meaning of life for life’s sake; or art for art’s?

Perhaps there is a purpose in reviving what we’ve lost.

For tickets, visit 59E59.org. For more about the 1st Irish Festival, which ends next week, go to origintheatre.org.