Home Love on the brink of war 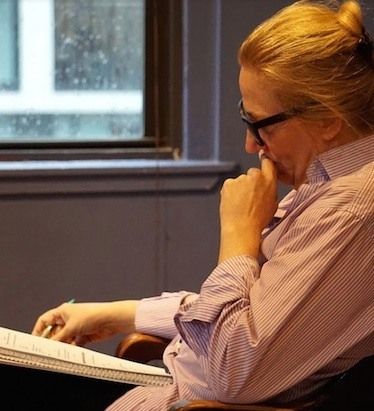 Honor Molloy on work on a text. (Photo by Vera Maura)

Love on the brink of war

It's August 1939. Europe’s boiling up to war. But Ireland’s having none of it.

That’s a starting point for Honor Molloy’s new play “Dublin Noir,” which will be read at the Irish Arts Center on Jan. 29 as part of Origin Theatre Company’s 2023 1st Irish Festival Finale. This marks Molloy’s fifth appearance in the annual festival. Previous works include 2016’s “Crackskull Row” – a New York Times Critic’s Pick – and “Round Room,” which received the Origin 1st Irish Best Playwright Award in 2020.

Over a glass of wine with writer Breege Boyne in Jackson Heights, Queens, on a recent afternoon, Molloy spoke about her latest play.

Breege Boyne: “Dublin” is a very familiar part of your work as a playwright and novelist. You spent the early part of your childhood there, and return frequently. “Noir,” on the other hand, is something new. Or is it?

Honor Molloy:  Yes...and no. Dark secrets, physical and emotional violence, dangerous women and treacherous love, even murder – all very much part of the noir world – are a constant in my work. The decision to blatantly exploit these elements and construct something as intricate and tricky as a noir play is new.

This goes back to the origins of the piece. Six summers ago, I stumbled upon Shea Murphy’s exquisitely written short piece, “The Spyhole”. First published in the March 1947 edition of the Bell, a Dublin magazine of literature and social comment, it’s a true account of an IRA member (and aspiring poet) who’d been placed in solitary confinement in Dublin’s Mountjoy Jail.

“I wanted to talk to the memories in my mind.

My mind was full of memories and I liked them.”

Prose like that appealed to me, so I considered adapting it for the stage. But I quickly decided to let someone else write yet another play about the IRA. Besides, I was eager to explore Ireland’s neutrality during the pre-World War II era. I used Shea Murphy’s incarcerated poet as a starting point and then quickly followed a path of my own choosing. That path led to noir.

What happens in the piece, and how is it noir?

Briefly:  In 1941 a Dublin poet looks back on the chain of events that landed him in a Mountjoy Prison cell. Two years earlier he’d left the city for a breath of country air and journeyed to Drogheda, 30 miles north of the city.

“Wanted one last holiday before the war. Wanted peace for a while.

“Far from Dublin’s blinking neon. Literati in the pubs and cafes.”

A dairy farmer named Murphy suspects the poet’s a Nazi spy and holds him captive in a shed. Murphy’s slop girl, Dolly, falls in love with the poet. It’s a triangle straight out of a James M. Cain novel and can only end in death.

What kind of research was involved in creating this world?

There are two main strands. The first deals with the cultural and political landscape in Ireland in the lead up to the Second World War. I also did on-site research in Drogheda, a visit to the Millmount Museum provided many rural and domestic details that I incorporate in the play.

Then there’s the research into Flanders Fields, the Anschluss, World War II, the Auden group and their poetry, the Cambridge spies, female spies and spymistresses, personal accounts and memoirs, dairy farming and hoof and mouth disease, and British music hall clowns.

My Irish grandfather – Dick Molloy – played the British music halls with the likes of Stan Laurel and Charlie Chaplin. According to Dick, Chaplin stole his best traits – the waggledy walk, the moustache, even the design of his face makeup – from the other clowns. When my grandda was “called home” to run the family dairy business, he became a bitter, violent man. Murphy is based on Dick Molloy.

The second strand is an immersion in noir – the great films noir of the 1940s and 1950s such as “Out of the Past,” “Double Indemnity,” “The Killers” and anything with the great Sterling Hayden. I also read a number of formal studies of the genre. I wanted to master the rules of noir so I could subvert them.

The conventional role in Noir for women is the femme fatale – a male fantasy. The gender roles are rigid and limiting. I wanted to shake that up by giving Dolly the kind of autonomy and agency Noir women don’t often possess.

Did your research yield any surprises?

Many. Most importantly, I think, is the realization that history really does repeat itself. The frightening growth of fascism in 1930s Europe is echoed by recent developments on the Continent, in Brazil and here in the United States. The politics of hatred and repression never disappear.

Can you tell me a bit about how you’ve been developing the play?

It’s been heavenly to read and research for the past three years. Early last year, I presented a segment at an Irish American Writers & Artists salon, which inspired me to compose this draft. Whenever I hit a critical plot point, I’d hold a table reading where the actors read the play with no rehearsal. This was a way of checking if I was on the right track.

Anything else you’d like to say about the play?

It’s wonderful to participate in the Origin 1st Irish Festival Finale at the spectacular Irish Arts Center. And I want to gratefully acknowledge the crucial role that IAWA has played in making this reading happen.

“Dublin Noir” by Honor Molloy and directed by Nick Cotz, will be presented at the Irish Arts Center in association with Irish American Writers & Artists, on Sunday, Jan. 29, at 3 p.m. For more details about the 1st Irish Festival, go to origintheatre.org and for details about upcoming shows at IAC visit irishartscenter.org.