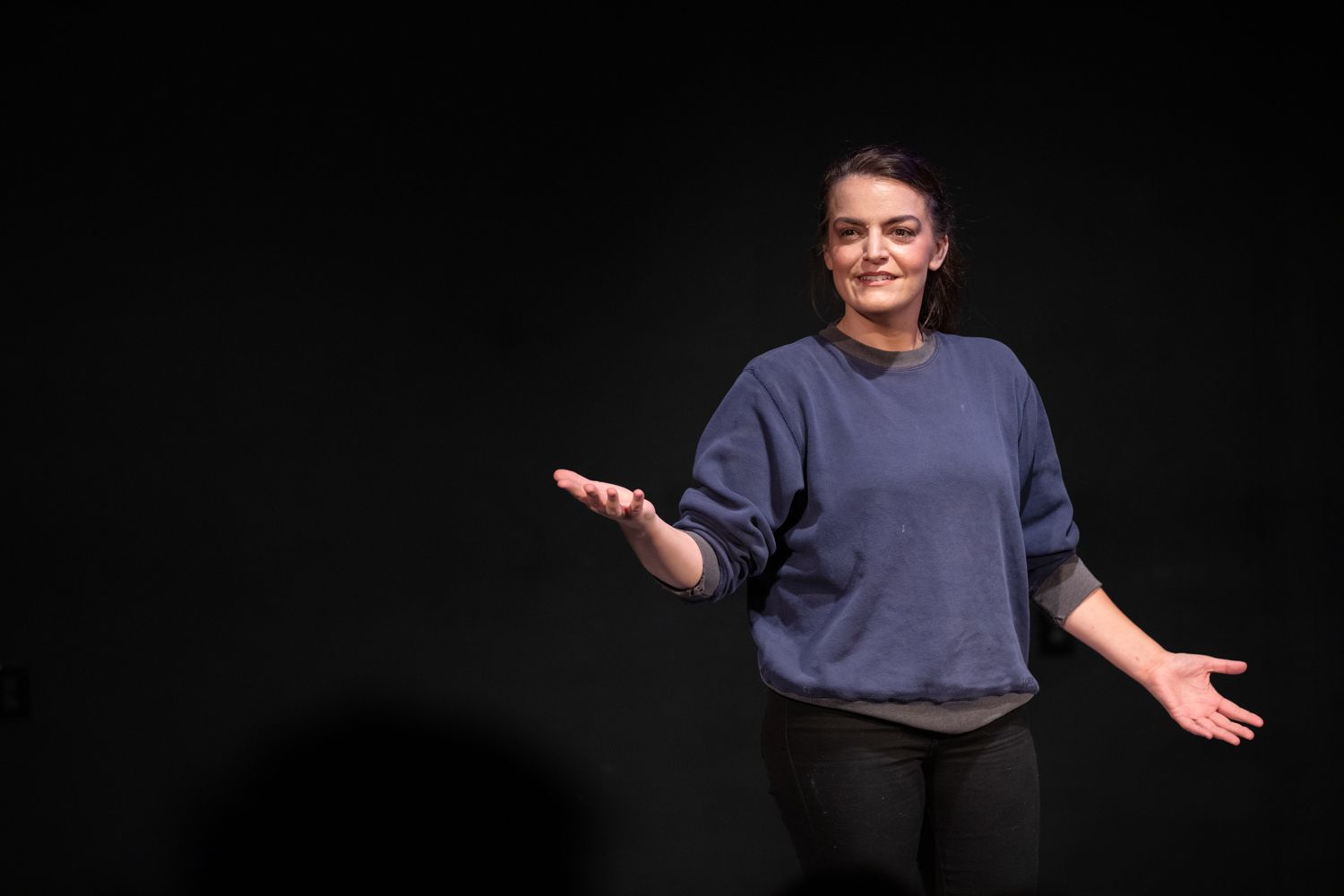 “The Funny Thing About Death” with Kim Kalish at the Cell. [Photo by Matt Kalish]

The 15th Annual 1st Irish Theatre Festival is under way, having been launched on Monday night at the Irish Consulate in New York. Here we have extracts from the host Origin Theatre Company’s program of events kicking off in the second week of the three-week festival (from Monday, 16th), with a summary of the first week’s events that are ongoing below, as well as a look ahead to the concluding phase of the festival, which takes place over the last nine days of January. For full details, go to origintheatre.org.

“Another auspicious encore is the Off-Broadway premiere at the Irish Repertory Theatre of Ronan Noone’s scorching character study, ‘The Smuggler,’ a Mamet-like story in rhymed verse of an Irish immigrant pursuing the American dream.  Mick Mellamphy reprises his role from the Origin 1st Irish 2019 production which earned him a nomination for best actor, and a Best Playwright Award for Noone’s original work.  (Runs from January 18 to February 26).”

“The Festival opens officially with the US premiere of ‘Heaven’ produced by Dublin’s Olivier Award-winning Fishamble, the New Play Company.  Written by Eugene O’Brien (winner of the Rooney Prize for Literature for “Eden”), and directed by Jim Culleton (Irish Times Best Director Award winner 2019), “Heaven,” which will be seen at 59E59 Theaters, is Fishamble’s 9thproduction brought to New York as part of Origin 1st Irish. (Performances from Jan 11 to 29)

“Also at 59E59 Theaters for the Festival is the pitch-black dark comedy, ‘Frankenstein’s Monster is Drunk and the Sheep Have All Jumped the Fences,’ a new work devised by Zoe Seaton based on the short story of the same name by Owen Booth.  Belfast’s Big Telly brings this acclaimed, cast-of-four production, which The Guardian calls ‘magical,’ to New York for its US premiere. (Performances from Jan 11 to 29)

“Tucked in a traditionally Irish enclave in The Bronx, the charming and bustling café An Beal Bocht, which is home to Poor Mouth Theatre Company, lets the Christmas holidays linger on with special encores of their immensely popular holiday pantomime.  That’s right Virginia, it’s always Christmas in the Bronx! (Sat Jan 14 at 8pm, and Sun Jan 15 at 2pm).”

“A new festival program is the ‘Festival Finale,’ a weekend of events hosted by the Irish Arts Center on the Festival’s closing weekend and Closing Ceremony.  On Sat and Sun Jan 28 & 29, readings of four new plays, and a John Kearns book event will take place in the New Irish Arts Center’s library at various times, and a special staged reading with musical accompaniment of a new musical will unfold in the new state-of-the-art main theatre on Sat at 7pm.  The plays are ‘Thirst’ by Ronan Noone, ‘Hunger’ by Bohdan Boychuk, ‘Those You Pass in the Street’ by Laurence McKeown (produced with Kabosh Theatre in Belfast), and ‘Dublin Noir’ by Honor Molloy (produced in association with The Irish American Writers and Artists – IAWA).  The musical is Eamon O’Tuama’s ‘Peace and Love in Brooklyn.’ (Sat Jan 28 at 7pm)

“The Festival’s Closing Ceremony at The Irish Arts Center on Monday Jan 30 will feature a surprise appearance by the celebrated Cross Border Orchestra of Ireland, which will be in the midst of an all-Ireland tour prior to its Carnegie Hall appearance on St Patrick’s Day.  Appearing virtually from Ireland, the youth orchestra will play with members of the Fairfield County Children’s Choir, who will appear live on stage.  The evening will also feature excerpts from the new musical “Peace and Love in Brooklyn.” The evening concludes with the Festival Awards that will recognize unique contributions to the Festival, followed by a reception.  Mon Jan 30, 7pm

“The final event of the Festival, ‘Origin’s St Brigid’s Eve,’ marks the feast of the patroness saint of Ireland, Saint Brigid, which this year becomes a new public holiday in Ireland. Consisting of a reading of a new play, and festive gathering marking the halfway point between the winter solstice and the spring equinox ‘Origin’s St Brigid’s Eve’ is on Tue Jan 31 at 7pm (New York IrishCenter).”