Home Life, marriage at the crossroads 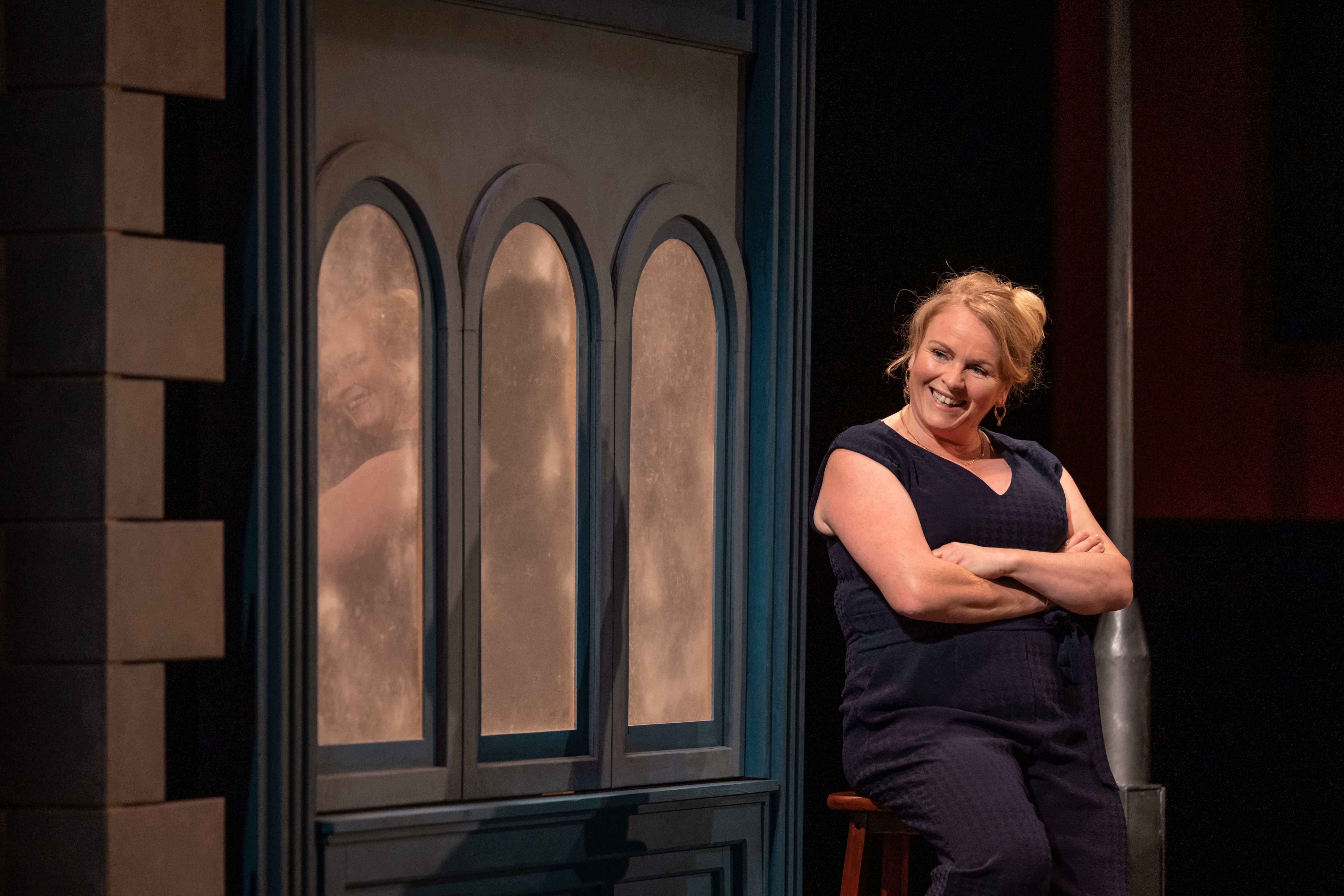 Janet Moran is Mairead in Fishamble's production of "Heaven" by Eugene O'Brien. [Photos by Ste Murray]

Life, marriage at the crossroads

At the halfway stage of the 2023 1st Irish Festival, Fishamble Theatre Company returns from on high to present the U.S. premiere of Eugene O’Brien’s “Heaven,” a holy show of personal contrition, directed by Jim Culleton and starring Janet Moran and Andrew Bennett, at 59E59 Theatres through Jan. 29. Neither altogether heavenly nor hellish, the play shirks the sacred, yet it lingers in limbo on the altar of the American audience.

After a critically-acclaimed run of “Duck Duck Goose” during last year’s 1st Irish Festival (previously reviewed), the Dublin-based theatre, as its first live post-lockdown production in New York, offers up “Heaven” as a one-act, two-handed testament to the midlife crisis.

While the title portends otherwise, this play aspires to all but the pious, and confides itself with the earthly: doubts of unfulfilling lives, and subterranean desires for confession, reconciliation, and redemption.

The story sets upon a Limerick couple, 50-somethings Mairead (Janet Moran) and Mal (Andrew Bennett) who attend a wedding in Mairead’s hometown in the Irish Midlands. On this ironic occasion, Mairead and Mal diverge to privately contemplate their fears at life’s midway mark, finding themselves at a crossroads as much in their marriage as within themselves.

Though they mutually value the friendship their marriage holds, something unsatisfied is left scarred in the heart of their lives—Mairead’s misgivings for motherhood and monogamy, and Mal’s lifelong, suppressed homosexuality—and amidst the tacky frenzy of the wedding the characters abandon their inhibitions, and wander in search of lost revelations.

Mal and Mairead each look to the heavens—not each other—for salvation from another; for Mairead, in the desire to kindle a romance with a former lover, and for Mal, the yearning to make certain covenants with a blue-eyed personal savior, a young private Idaho Mal refers to as “Jesus.”

The performance is divided between the monologues of Mairead and Mal, and while much is said, none of it is spoken between one another on stage, which feels in a way like a double-booked one-person show; yet the performers’ monologues elucidate the play’s prerogative: the loneliness of an identity crisis.

Despite the plot’s resolution reaching somewhat humdrum, expected conclusions and commentary, particularly regarding double standards and uneven responsibility between the sexes, this production does incite an intriguing divisiveness of sympathy for its characters, and calls into question which circumstances a parent’s absence might be excused, and which ones are not.

What is perhaps the obvious fact of the production’s iffy reception has been the surprising lack of attention to detail in the theatrical presentation, which seems neither becoming nor befitting an award-winning theatre company’s New York premiere.

The production’s set (design by Zia Bergin-Holly), a stocky structure which looks vaguely like a bar, a church, or a castle, complete with the odd barstool and smeared paned glass, has the appearance of something secondhand from the scene shop of some other off-Broadway run.

At certain points in the performance, Mairead either sits or lies on the ground stage left, while Mal does the same in shadow, until he takes a seat on stage right, and the audience is left to wonder how much all of this is symbolic, or whether it’s possible that another chair was omitted from the budget; that remains uncertain. However appropriate the frill-less set complements the banality of a small town Irish venue, the sparseness of the design on this New York stage translates instead to a sense of amateurishness.

The lighting for the performance (design by Sinéad McKenna) would have been spot on, had the houselights in the theatre not switched on at distractingly random intervals, a peculiar malfunction which the audience was assured from the start was not a part of the show, but purely accidental. Between the seemingly genuine act-of-God and the scenery’s faulty tower, it has been this premiere’s disappointment to not have surpassed the potential that it deserves.

The regretful reality of “Heaven” is that the production would be better off consisting solely of actors unencumbered by the space, performing their story, which is what Janet Moran and Andrew Bennett accomplish in making this play worth seeing. The unanimous delight of Moran and Bennett’s performances is in the remarkably humane portrayal of their parts.

In the roles of Mairead and Mal, ordinary people struggling to make meaning of their lives, the sombre sweetness of Moran and Bennett’s performances lie in how simply ordinary they are. Moran and Bennett, in tandem with O’Brien’s text, are so exceedingly relatable it is as though the most common person has stepped onto the stage, and recited the secrets of their lives.

With subtle balances of dramatic command and human awkwardness, Bennett and Moran convey a formidable portrait of imperfection; the humor, candidness, and self-contradiction of characters that are unmistakably real. Between Bennett’s delicate monologue about living in “the shadow life,” whose authentic life he conceals below the superficiality of an acceptable one, and Mairead’s perpetually desperate pleas “Is this where the 50 plus years of my life has been leading me?” these performances will touch the soul.

O’Brien’s writing sprawls between heaves of consciousness and subliminal hymns of prose. Although the plot arch is reasonably contained, O’Brien’s normal, stagnating characters thrill audiences through this 85-minute drama without a dull moment to spare.

With themes traversing repression and temptation, individuality and obligation, this play will pry open more questions than it will have answers. The way to heaven is for you to find.