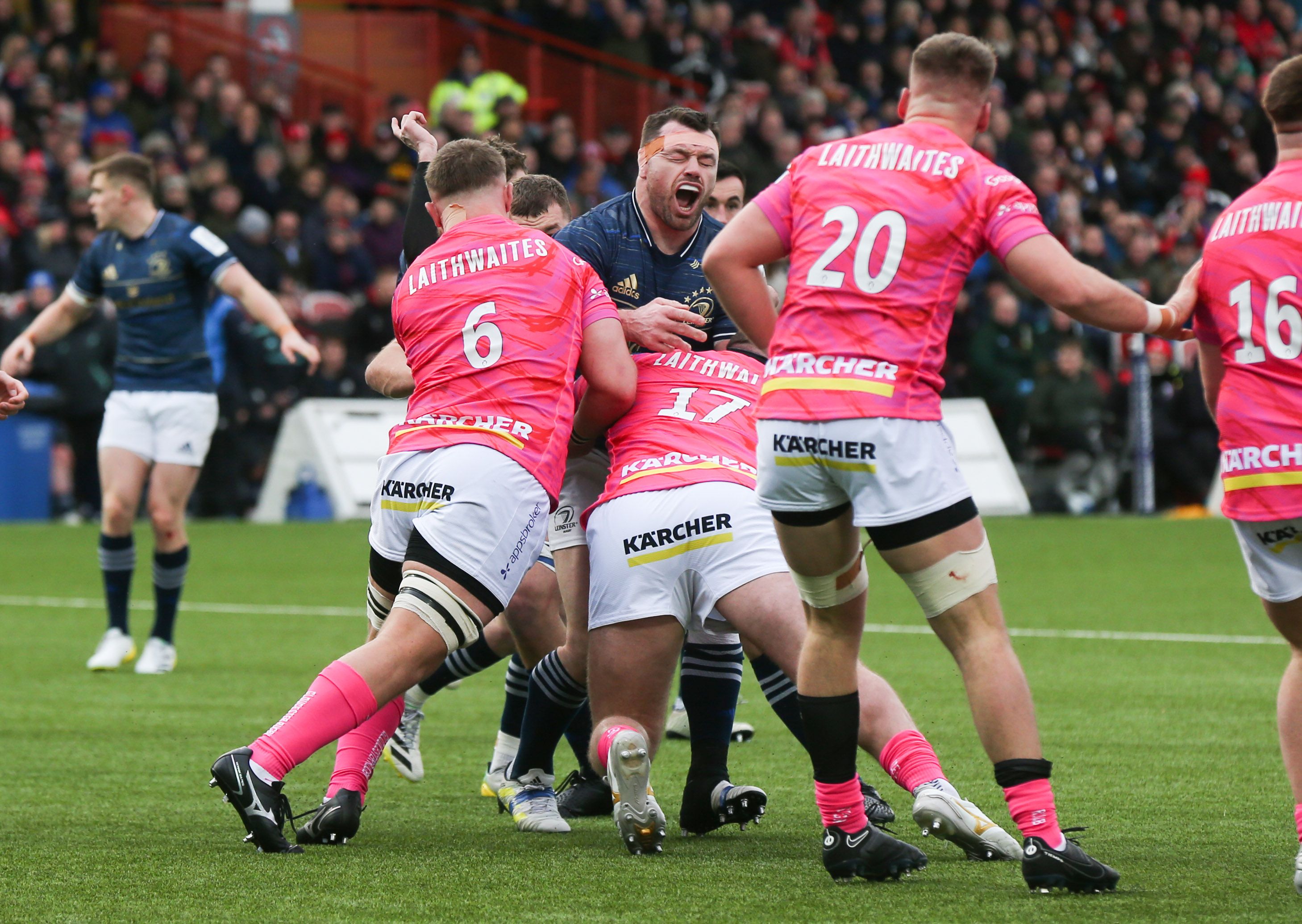 Cian Healy of Leinster is tackled by Gloucester’s Ruan Ackerman and Harry Erlington at the Kingsholm Stadium. [Inpho/Tom Maher]

Leinster are so far ahead of everyone at the moment that only one thing is holding them back — their failure to get across the line in a final.

And that doubt will persist this springtime until they prove they can get to the final which incidentally is being held in Dublin this year and then go on and win it unlike last year when they were caught in the last minute by Ronan O’Gara’s La Rochelle outfit.

They went to Kingsholm at the weekend and swamped the home side with the width and variety of their play to follow up on their 57-0 trouncing at home by winning this Heineken Champions Cup round of 16 with as much ease as any visiting team has a right to expect at this famous old stadium.

Now with a maximum 15 points after three games, the four-time winners will go in search of a record equalling fifth title knowing that their game has progressed and their expansive style has been honed in the current season.

Leo Cullen’s charges were in such control that they had the game and a bonus point sewn up by halftime thanks to tries by Jordan Larmour, Michael Ala’alatoa, Jamie OSborne and Caelan Doris. And with Ross Byrne firing on all cylinders with his boot, it meant an extra eight points from the order of the boot.

When Hugo Keenan crossed early in the second half and Byrne again expertly slotted over an acute conversion, it looked for a moment as if Leinster might outscore their home margin.  That feeling was added to when player of the year Josh van der Flier touched down, with a new Byrne, Harry successfully kicking the extra points and by the time hooker Ronan Kelleher notched a seventh try on the cusp of the last whistle with Byrne converting, it meant the visitors had recorded a record home defeat on their opponents in Euopean competition.

However despite the big loss, the home team could yet reach the knockout phases should they win against Bordeaux-Begles in France this weekend.

There is no doubt that a 15-man Munster side for the 80 minutes would have won this game easily but that wasn’t the card that fate dealt them at Thomond Park on Saturday.

Leading 17-0 when Jack O’Donoghue was red-carded for a high challenge on David Ribbabs after 22 minutes, and even extending to 24-0 when Gavin Coombes bulldozed over by half-time, you just knew there would be a response from the visitors.

And in a game of the proverbial two halves, there was a great response which brought them back into the picture knowing that they could tie the game in the last few minutes if they opted to take a penalty into the corner of the pitch. Instead they took the three points on offer to cut the margin to 27-23 and hope they would gain possession from the restart which would see them work a late, late winning try.

They did indeed win possession from the kick-off in that instance but credit to Munster, they mauled like madmen to secure a turnover scrum but with the clock in the red by this time, it led to the final blast of the whistle and a great win for Graham Rowntree’s men in the circumstances.

Two Coombes tries as well as one by O’Donoghue before departing with Joey Carbery slotting over nine points meant they did not add to their 24 points half-time tally until Jack Crowley held his nerve to slot over a late penalty on 75 mins to give his side breathing space.

Saints’ Fin Smith converted Tommy Freeman and James Ramm’s touchdown and slotted over three penalties, the last of which in hindsight should not have been kicked for three points and instead have played for a possible seven-pointer to the corner which would have seen the game end all square.

In the other big match, Ulster suffered the heartbreak of seeing their longtime 3-0 lead turn into a last minute loss when Ronan O’Gara’s side got in for a converted try with time up.