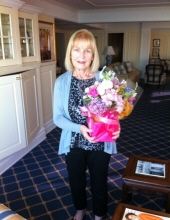 Helen was born in Rockaway Beach, NY, to the late Thomas and Marian Saunders (nee Harrigan). She graduated from Saint Francis DeSales School, CUNY Borough of Manhattan Community College, and Saint John's University, where she earned her BSN. Helen was a Registered Nurse and joined the   Operating Room staff at Elmhurst General Hospital in 1981. Helen retired in 2001 and continued to work as per diem staff at Elmhurst for several years.

Helen was the beloved wife of the late John T. Sharkey for 59 years. She is survived by her daughter Jacqueline, granddaughter Samantha Nicole, her son Brian and his wife, Maria. She is also survived by her sister-in-law Lillian Williams, her brother-in-law Michael Sharkey, and his wife,   Alice. She also leaves behind several nieces and nephews. Helen was   predeceased by her loving brother Thomas J. Saunders, her sister-in-law Virginia McConnon and son-in-law Robert Eduardo.

Helen was a lifelong friend and  mentor to many. In addition, she enjoyed traveling the world with her husband. John always credited his success in life to Helen, and they are reunited again.

The Sharkey Family would like to thank the staff at Beach Terrace Care Center, Long Beach, NY, for taking care of Helen over the last four years.