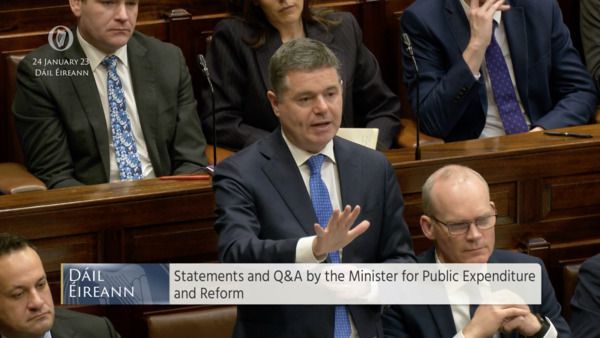 Irish Minister for Public Expenditure and Reform Paschal Donohoe today confirmed a breach of election rules after Fine Gael in the Dublin Central constituency “unknowingly” received an unauthorized corporate donation of €434.20 in 2020.

According to the Irish Times, Mr. Donohoe said that the Standards in Public Office Commission (Sipo) has been notified and that the amount received in excess of the allowable limit, €234.20, will be returned to businessman Michael Stone’s company, Designer Group.

Speaking in the Dáil, Donohoe apologized again and said he deeply regretted that the controversy had caused the loss of Mr. Stone from the boards of both the Land Development Agency (LDA) and the North East Inner City Taskforce.

In recent days Mr. Donohoe has been seen as fighting for his political future.

Businessman Michael Stone confirmed that he had paid for the erection of posters during the 2020 general election for Fine Gael in the Minister’s Dublin constituency, totaling €1,406.20.

Mr. Stone said the Minister for Public Expenditure and Reform was unaware of this and only found out about it last Wednesday when the matter was raised in the Dáil.

Earlier this month, Minister Donohoe faced questions over a donation made during his 2016 election campaign. He confirmed that the Standards in Public Office (Sipo) Commission was looking into a complaint.

It had emerged that ahead of the 2016 general election Michael Stone had paid six individuals to hang up election posters. That payment of €917 for this had not been declared by Mr. Donohoe.

He said “In December 2022, Paschal asked me whether I had provided such help with the 2020 election. I mistakenly believed that I had not and told him so. On Wednesday 18 January 2023, I again confirmed to him my mistaken recollection.

“When I heard later that day that the 2020 election had been raised in the Dáil, I had the matter re-checked and discovered that my recollection was wrong and that, in fact, similar assistance had been given with postering in the 2020 election.

“I immediately contacted Paschal and told him so and apologized for my mistake.”

Responding to the development, Taoiseach Leo Varadkar said he believed Mr. Donohoe was telling the truth.

“I believe him,” he said. “It is clear what happened here.”

Opposition parties have called for Mr. Donohoe to step down.